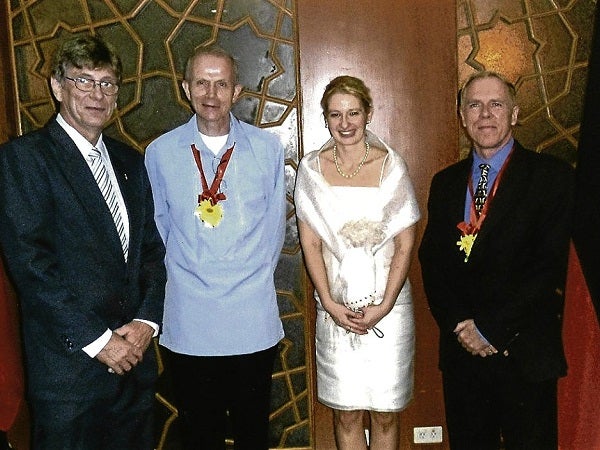 German Ambassador Dr. Joachim Heidorn recently visited Cebu with his wife Anna Maria and their little daughter Joana. This was their first visit to Cebu, as well as their first trip out of Manila, since their arrival in the Philippines last September.

The ambassador presided over a ceremony held at Salon Zaragoza of the Casino Español de Cebu to confer Germany’s Federal Cross of Merit on Fr. Heinz Kulueke, SVD. Fr. Heinz is the superior for southern Philippines of the Society of the Divine Word conregation. He is a full-time professor of Philosophy at the University of San Carlos in Cebu.

The Cross of Merit has been conferred on him in recognition of 25 years dedicated to the cause of “Justice, Peace and Integrity of Creation.” Father Heinz has established a rescue-and-shelter project that ministers to poor children who live among tombs in cemeteries, as well as scavengers in dump sites and victims of the sex trade.

Dr. Franz Seidenschwarz, Germany’s Honorary Consul in Cebu, gave the welcome remarks at the start of the program, and introduced Ambassador Heidorn, who lauded Fr. Heinz.

As he said, “Often true happiness is found in dedication to one’s fellowmen. Truly, this is a very special occasion.”

In his acceptance speech, Fr. Heinz humbly stated that he would like to share the recognition with the team he works with. He said the ministry started with just a handful and now, they are 70 strong.

Bernd Henkenkaf, prominent German businessman, handed Fr. Heinz a donation in behalf of the export firm Eurowood of which he is the CEO. Ambassador Heidorn then proposed a toast with excellent Veuve Clicquot champagne.

In attendance from the University of San Carlos were Fr. Tony Salas SVD, vice president for academic affairs, and Fr. Eugene Docoy, SVD, executive director of the rescue and shelter project.

Add to them Inquirer columnist Johnny Mercado; Aidy Estrada, representing KKS; and staff from the German consulate in Cebu—Ellen Alanzado and Jeralyn Inso. On hand from the Casino Español to supervise the smooth flow of service were food-and-beverage director Marina Codina and Aneth Galoy, in charge of events.

While in Cebu, Ambassador Heidorn took time to deliver a speech at the International Conference on Renewable Energy and Energy Efficiency held at the Marco Polo Plaza Hotel. Sponsors were the following: Goethe Institut, the Department of Energy, GIZ for International Cooperation, the Association of United Filipinos Trained in Germany, and the German-Philippine Chamber of Commerce and Industry.

The Consul General of the People’s Republic of China and He Shijing hosted a farewell reception at the ballroom of the Marco Polo Plaza Hotel. He said Cebu has been the highlight of his diplomatic career, which has spanned 35 years.

“I have made many friendships here in the past four and a half years,” he said, “And I have seen the progress as evidenced by the construction boom and the increase in traffic.”

He paid tribute to his lovely wife who has helped him carry out his duties. To clinch his goodbye he used a typical Cebuano phrases, “Ari na ko.”

“Ayaw usa,” Cebu City Mayor Michael Rama countered over the microphone, a usual answer which may translate as “not just yet.”

Cebu Governor Gwendolyn Garcia looked back on Consul General He Shijing’s stint in Cebu as one where he did “all the good you could do; your performance has been admirable.”

Then, in Chinese she said a few words she herself translated as, “Cebu loves you… farewell… take care…”

A couple of weeks later the Chinese Consulate hosted a big reception at the Grand Convention Center to celebrate the Chinese New Year in advance. It was also an occasion for the Cebu community to meet the new Consul General, Zhang Weiguo and his wife Chen Lianning.

On Jan. 23 at 10 a.m., Consul General and Zhang  were special guests, along with Governor Gwen, at the grand Chinese New Year celebration held in the Shangri-La. General manager Joachim  welcomed them all and led them to Tea of Spring, the resort’s Chinese specialty restaurant where a magnificent luncheon was served.

In the evening at 7:30 p.m., the action shifted to the lobby of the Marco Polo Plaza Hotel for the enormous Ye Sang salad tossing ceremony.

General manager Hans Hauri and his wife Bo welcomed a large group of VIPs who trooped to the hotel’s Café Marco for a sumptuous Chinese buffet.