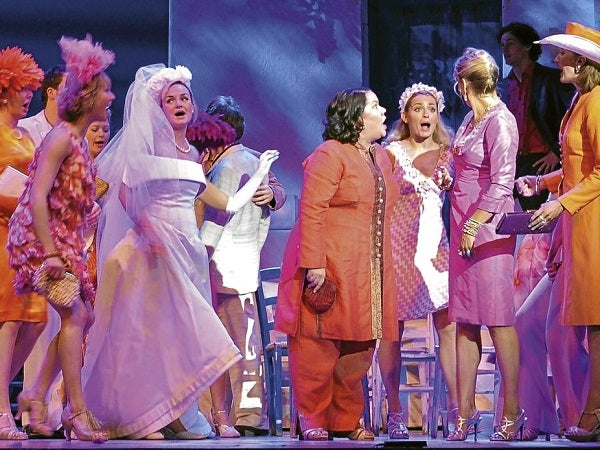 Bring out the “Dancing Queen” in you, the ’70s are back! The world’s No. 1 musical, “Mamma Mia!,” is now in Manila until Feb. 19. The music of the iconic band ABBA took my buddies and I along an exciting journey as the musical brought us to Greece.

Actually, we were just at the Cultural Center of the Philippines, but the décor and show got the ambiance perfect. We were not only Grecian in theme, we were todo ’70s disco, as well.

The lobby of the CCP was filled with disco balls and reverberated with groovy disco hits as host Concertus Manila welcomed its very special guests. Producer Francis Lumen enjoyed a little chat with the other sponsors before the start of the show.

Infinity, powered by Smart, was delighted to be event presenter once again, following its successful partnership with Concertus on other productions like “Cats.” Smart Infinity ambassador and top host Johnny Litton and I welcomed the VIP subscribers who enjoyed their complimentary tickets thanks to the prestige network. Julie Carceller, Infinity department head, and Ruth Taal, Infinity marketing manager, headed the Smart/PLDT group of executives who were on hand to support “Mamma Mia!”

Event presenter Citibank Philippines was also on hand to make the experience a memorable and rewarding one for its valued clients. The Citi team was headed by Sanjiv Vohra, country officer, along with his wife Minna. Other Citi luminaries on hand were Sergio Zanatti, consumer markets head; Arcus Fernando, global markets head; Cecille Fonacier, marketing director; and Bea Tan, credit payment products head.

Citibank had a special promo for its cardholders for “Mamma Mia!,” and the electronic raffle tickets were won by Philip Austria and Eduardo Garcia along with their dates. The prize came with personalized car service from their homes to CCP to boot. Now that’s a great way to use one’s Citi Rewards points.

The star-studded gala night was a heavy mix of business, political and show biz personalities. I spotted former first lady Imelda Marcos with her grandson Borgy Manotoc and his stunning girlfriend Georgina Wilson. We all have to thank Mrs. Marcos for promoting the arts and building the CCP.

Celebrating the night were ABS-CBN dignitaries Gabby Lopez, Charo Santos-Concio and Cory Vidanes. Not far away, I spotted another media mogul, Wilson Tieng of Solar Entertainment.

It was also great to see international artist Arnel Pineda and Tony awardee Lea Salonga. Lea and I reminisced how we got to party with the “Cats” cast last year. We should have a “Mamma Mia!” cast party before the show ends.

I know it sounds crazy, but I was not brave enough to stand and dance as “Dancing Queen” was played onstage. I only finally stood up as the entire packed theater gave the cast a standing ovation.

For tickets, call TicketWorld at 8919999 or visit www.ticketworld.com.ph.

ABBA hits are on my playlist as I run the Condura Skyway Marathon Run this morning. Together with thousands of runners, we are supporting the mangrove reforestation project in Sibugay Bay, Zamboanga. Ton and Patrick Concepcion, brothers and heads of the Condura Run, have pledged three mangrove trees for every runner.

I’m sure that busy and multi-awarded runner, coach and Condura Run organizer Rio de la Cruz has made sure that all the runners are happy this morning. Coach Rio is a happy man these days because he recently got engaged to Nicole Wuthrich, his college sweetheart.

We met the cute couple in Boracay over the New Year, and they have asked me to be their ninang. I wonder if he will run to the church on his wedding day.

Teejae Sonza, Coca-Cola brand manager, told me that fitness in the country is not just a trend, but also a lifestyle. Indeed, the population of sports and fitness enthusiasts is growing steadily. Powerade Ion4, which has four ions, helps us care for our “inner gear.”

It’s just the start of February, but love is in the air already. Canon is opening the “Women in Love” photo exhibit at the Power Plant Mall in Rockwell on Feb. 7.

In cooperation with Pond’s Gold Radiance, Vespa and the Inquirer, the photo exhibit of gorgeous couples will be on display until Valentine’s Day. Top photographers Sara Black, Aly Reyes, Willy Saw, Philip Sison and Wesley Villarica used their advanced Canon cameras to capture love among the generous couples who are supporting this project.

Aly Reyes has been into photography since the ’80s and is particularly fond of taking pictures in ambient light. His Facebook page is full of outstanding photos of his exceptional work. Check out his photos of beautiful cousins Tootsy Angara and Patty Chilip and their respective hubbies.

Expert photographer Philip Sison whipped out his extra long Canon lens to dramatically capture my hubby Dennis and I on a “Roman Holiday” moment on a Vespa scooter.

National Bookstore, SM Accessories and Swatch will be giving wonderful gifts to all the ladies, and donations will be presented to Philippine Red Cross Makati, Gifts & Graces, and Assumption HS 81 Foundation. The opening should be a blast, as McDonald’s and Jamba Juice are supplying food and drinks.

And all that is just the start to this wonderful month! It’s also the birthday of my mom-in-law, Lola Cindy, and I’d like to greet and wish her a love-filled month ahead.