DOT: Growth of the tourism decade is the triumph of the Filipino people | Inquirer Lifestyle ❮ ❯ 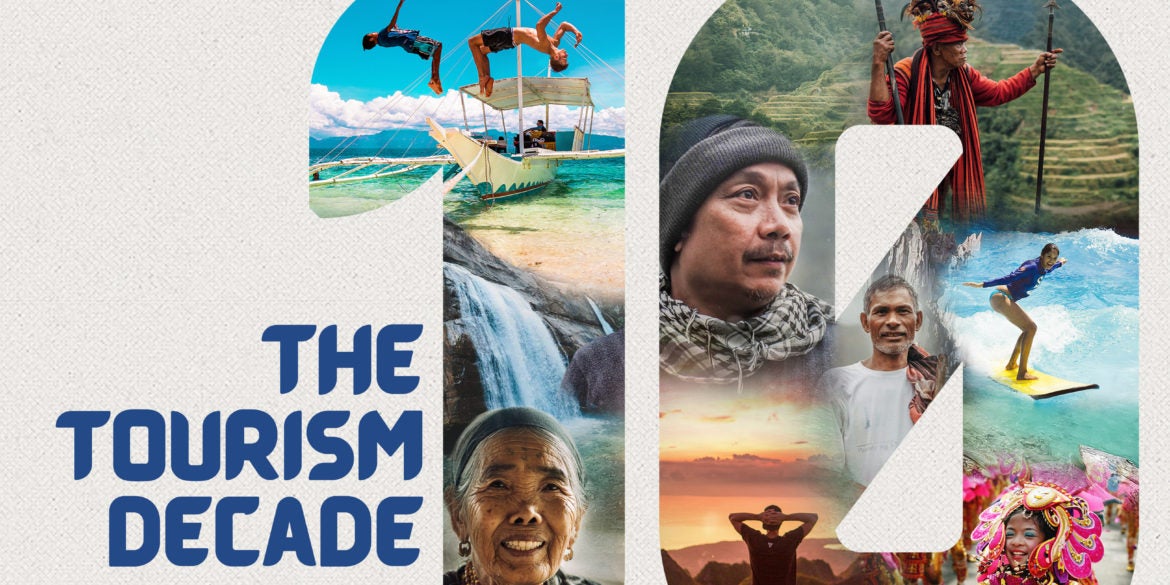 DOT: Growth of the tourism decade is the triumph of the Filipino people

The Department of Tourism (DOT) commemorates the 10th year since Republic Act 9593, better known as the Tourism Act of 2009, was signed into law. Enacted on May 12, 2009, by President Gloria Macapagal-Arroyo in Cebu City,  R.A. 9593 recognized tourism as an indispensable element of the national economy and an industry of national interest and importance.  Tourism is now a major revenue generator, a catalyst for socio-economic growth and a source of national pride.

In 2017, the Philippine Statistics Authority reported that the sector contributed 12.2% to the country’s GDP, equivalent to PHP 1.929 trillion. This is a huge leap compared to PHP 466 billion in 2009 (or 5.8% of the GDP).  Tourist arrivals have grown as well. In 2018, the Philippines welcomed 7.1 million international visitors compared to 2009 when there were only 3 million foreign arrivals.

Another indicator of the rise of the Philippine tourism industry is the number of jobs it has created in the last decade. By 2017, 13.1% of total employment—5.3 million jobs—were directly attributed to the tourism sector, compared to only 3.9 million in 2009, before the full implementation of the law.

“We celebrate the Tourism Act of 2009 to look back at how the tourism sector was able to transform lives and communities for the past decade. However, it is also a driving force, our motivation to work harder knowing that tourism has the power to propel the nation and its people toward growth and prosperity,” DOT Secretary Bernadette Romulo Puyat concluded.

Senator Richard Gordon and former Bohol representative Edgardo M. Chatto were the principal authors of the law.  Under R.A. 9593, DOT was reorganized and given considerable sources of funding to achieve its designated mandate and functions. As provided by R.A. 9593, the Philippine National Tourism Development Plan (NTDP) is DOT’s strategic framework that guides the development of the industry.

To ensure that DOT gets these done, the Department is implementing a convergence approach where it works in partnership with other national government agencies such as the Department of Transportation (DOTr) and the Department of Public Works and Highways (DPWH). There are 12 international gateways that service the 49 Tourism Development Areas in the Philippines, with 8 having already undergone rehabilitation and improvement.

The government is currently building new airports, including a new terminal at Clark International Airport that is due to open in 2020. In the pipeline are the Bicol International Airport in Legazpi, and expansion plans for Manila, Davao, Iloilo, Kalibo, Puerto Princesa, and Laguindingan airports.

Two organizations were reorganized under R.A. 9593. The Philippine Tourism Authority (PTA) became the Tourism Infrastructure and Enterprise Zone Authority (TIEZA), and the Philippine Conventions and Visitors Corporation (PCVC) was replaced with the Tourism Promotions Board (TPB).

TIEZA is the implementing agency and infrastructure arm of the DOT. It prioritizes the construction of tourism infrastructure projects of national interest and significance. From 2010 to 2019, TIEZA completed a total of 300 projects (including the Boracay Water Drainage Program, Phase II), 15 of which are ecotourism projects in provinces that need development the most.

R.A. 9593 also provided for the establishment of Tourism Enterprise Zones (TEZ), parcels of land developed into master-planned, integrated tourism complexes, and designated as such as by the TIEZA Board. Vital components of TEZs are infrastructure utilities, tourism-sector enterprises such as accommodation, MICE, theme park and other leisure facilities.

TPB, on the other hand, is DOT’s marketing arm. TPB’s milestones for the last decade include successfully marketing and promoting to strategic key markets that contributed 85% to 90% of the total international visitor arrivals to the Philippines in partnership with private and public stakeholders. It has hosted a total of 4,374 international travel trade and media practitioners to participate in invitational programs or familiarization trips from 2015 to 2018 and 1,279 foreign buyers from 2011 to 2018 during the Philippine Travel Exchange.

The Intramuros Administration (IA) is DOT’s arm responsible for the restoration and development of the historic walled city of Intramuros. IA is positioning itself to be known as the country’s creative urban heritage district. The Maestranza Wall will be transformed into the Philippines’ first creative hub focused on design excellence.

PARTNERSHIP WITH THE PRIVATE SECTOR

“Whereas prior to R.A. 9593, the private sector was somewhat of a passive partner, the creation of the TCP gave increased importance and responsibility to the stakeholders as far as how the tourism industry should proceed,” said current TCP President Jose Clemente III.

A CELEBRATION OF THE TOURISM DECADE

Marking the 10th anniversary, DOT will launch a year-long campaign titled “The Tourism Decade: Celebrating the Rise of the Philippine Travel Industry with the Tourism Act of 2009.” It narrates how R.A. 9593 has significantly improved the lives of thousands of individuals and communities. Through the stories of the people from the tourism sector, those who dedicated their lives to making a meaningful and memorable experience for visitors, the public is able to affirm the transformative power of the tourism industry.