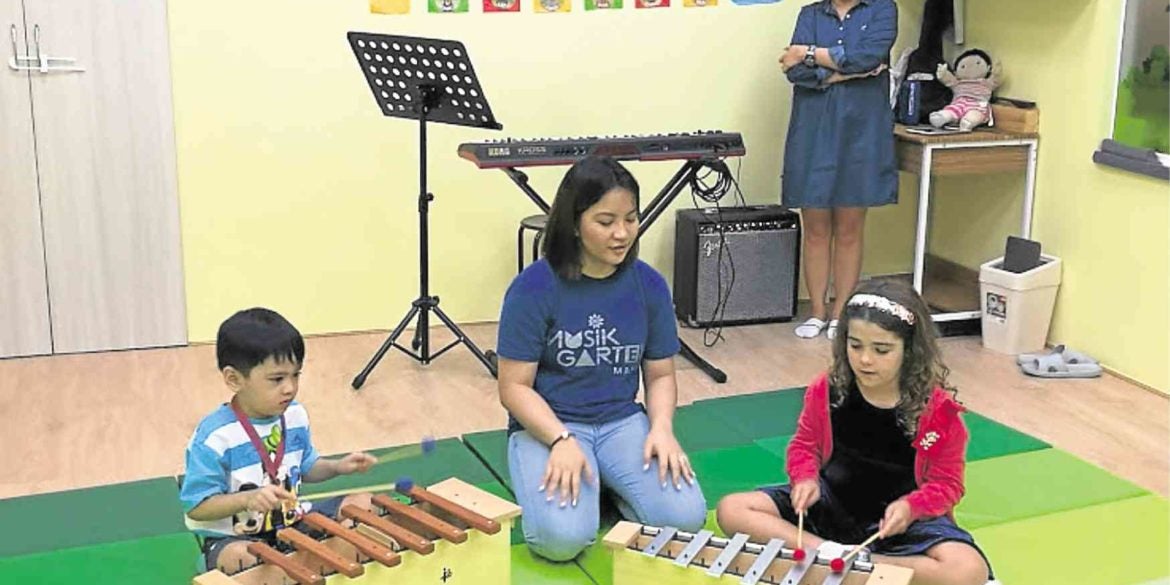 BEYOND DO-RE-MI Nikki Junia (standing) operates Musikgarten, a school for children in the Philippines which follows an early music and movement program to enable language development, selfexpression, memory skills, concentration, social interaction, among others, all in a fun setting. —POCHOLOCONCEPCION

Never too young for Bach: Music for kids’ brain dev’t

MANILA, Philippines — To most Filipino parents, the future of their child is shaped by a good college education. In fact, many college graduates take up master’s degrees, and a good number continue on to get doctorate degrees to maximize their career and income potentials.

But if Nikki Junia were to have her way, she would push for an educational system that prioritizes preschool as the most important stage in a person’s development. She pointed out that kindergarten was where a child developed everything needed before proceeding to higher learning.

She also believes that a vital element, especially in a child’s early years, is music, and this is at the heart of a school she runs called Musikgarten.

“It’s a curriculum written by music educators, music therapists and early childhood specialists like Montessori in the US,” Junia said.

The very first Musikgarten opened in 1994 in the United States, when Dr. Lorna Lutz Heyge merged her music education background with the experience and input of childhood education specialist Audrey Sillick.

Heyge holds degrees from Eastman School of Music, Northwestern University, a Ph.D. in musicology from the University of Cologne, and an Artist Diploma (the German equivalent of a Doctorate of Musical Arts) from Cologne Musik Hochschule. She was formerly an assistant director of a music school in Germany.

Commissioned by the authors of the curriculum she taught to preschool children, Heyge adapted the program and brought it to North America in 1974 as Kindermusik.

She met Sillick in Toronto Montessori School, and with her guidance continued to study the role of music and movement in the development of young children. Together, the two wrote curricula that reflected their combined education, experience, and the latest research on child development. Their beliefs and studies are at the core of the Musikgarten curricula.

The first Musikgarten in the Philippines opened in 2010 in Mandaluyong before it moved to Ortigas. It now has three more branches in Laguna province, Baguio and Bonifacio Global City in Taguig City.

Junia said music could stimulate brain development, citing one of many studies where a group of children who listened to music were found to have more neural pathways in their brains than another group that did not.

“The most critical period of human development is from zero to 2 years old.” she said. “The brain, from a very small size, grows rapidly. The neural pathways start to connect and form.”

Children tend to have a slower time processing things upon reaching primary school age, and when they reach 8, their character and personality would have been formed, she said.

She said it may be too late for parents to say, “I will invest in my child’s education when he or she is in college. That’s why, in advanced countries, parents invest on the education of their children at a very young age.”

Junia said that when she first taught music to 3-year-old children, she noticed they were easily distracted.

“Things happen — either you stimulate their interest in music or, the sad part, they lose interest because they are being forced to do something they’re not biologically, physiologically and emotionally prepared for,” she said.

That’s why Musikgarten is a group program where, for instance, five kids can engage, be stimulated and interact.

Musikgarten is nontraditional and not teacher-led, but rather child-centered, she said. “We listen to the child. What does the child want to learn? How can I help the child? The child is my boss. I have the method to teach the child. It’s a progressive approach, listening to the child,” she said.

How do you measure a child’s progress and skills in Musikgarten?

“Musical skills can’t be measured,” she said. “Like in art, each child has his or her own calendar of development or timeline. That’s why we are flexible in teaching techniques. The basic objectives are to develop a good sense of body rhythm and melodic pitch.”

Not all Musikgarten students go on to pursue music as a goal, but one of them, Gerphil Geraldine Flores, joined season one of “Asia’s Got Talent” in 2015 and finished second runner-up.

“It’s designed not just as a musical class, but also a play-based one,” Junia said. They play live music and the songs for Musikgaten’s early childhood programs are classical—like Bach, Mozart, Schumann, Saint Saenz — as well as Western and Eastern folk, and nursery rhymes, she said.

Some of the songs are arranged “with children in mind” and each class runs for only 45 minutes because children have a short attention span, Junia said.

A class is rather small — with just six to eight children. The youngest Junia said she had handled was 2 and a half months old.

Musikgarten also takes a different approach regarding the parents’ participation — they need to be in their child’s class so that “they’re also being educated.”

“They get to bond with their children, and it empowers them as well. I was once a young parent and I ran out of activities to do with my baby. But this program helped me do more purposeful things with my baby at home,” she said. “If both parents can come, much better. The dads are creative, they’re playful.”

“Parents are the children’s first teachers, but doing an actual activity with children is another thing,” she said.