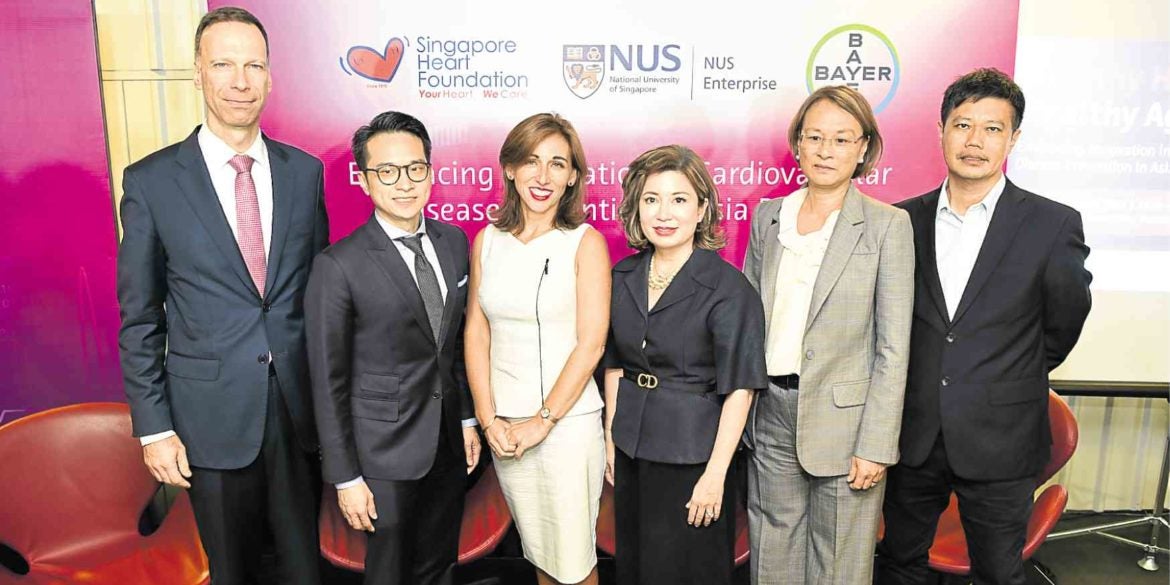 From heart diseases to cancer

Heart disease. Strokes. Cancer. Just the mention of these dreaded diseases is enough to strike fear in the heart of any individual.

According to the Centers for Disease Control and Prevention, cardiovascular disease (CVD) is the most common type of heart disease in the world today. The World Health Organization has named it one of the top 10 causes of death. In 2015, 8.8 million deaths worldwide were due to CVD.

A type of CVD is coronary artery disease (CAD), which occurs when fatty deposits, cholesterol and plaque build up in the arteries, obstructing blood supply to the heart.

Both CAD and PAD may lead to strokes and heart attacks.

Studies have shown that the risk of strokes has increased significantly in Asia due to the region’s rapidly aging population. It’s estimated that in 2050, Asia will have 72 million patients with atrial fibrillation, a condition characterized by irregular heart rhythms, which increases the risk of stroke caused by blood clots.

Similarly, despite progress in cancer treatment, millions of people worldwide die of it.

A study, “Managing the Burden of Cancer in Asia,” found that Asia accounts for half of the world’s cancer cases. The study estimated that the number of cancer cases in Asia will reach 10.6 million by 2030.

And then there’s the problem of a rapidly aging population. The United Nations Population Fund estimates that by 2050, one in four people in Asia and the Pacific will be over 60 years old. Like a vicious cycle, as more and more people age, the diseases that inevitably accompany aging, such as cardiovascular diseases, will also increase.

The good news is, there’s hope for the prevention of these diseases, or for their treatment.

At a recent media conference in Singapore, officials of Bayer Pharmaceuticals presented their recent innovations which can stop the spread of these dreaded diseases.

For the treatment of atrial fibrillation (AF), and the prevention and treatment of CAD and PAD, Bayer has introduced Xarelto (rivaroxaban), “the first direct oral Factor Xa Inhibitor developed to prevent and treat dangerous blood clots.”

This medication, according to Bayer, has the potential to improve clinical outcomes and quality of life in patients with a broad range of acute and chronic blood-clotting conditions.

Last year, the US Food and Drug Administration and the European Commission approved the administration of 2.5 mg of rivaroxaban twice daily, in combination with a once daily low dose of aspirin to reduce the risk of major cardiovascular events.

“This combination has been shown to reduce the risk of stroke by almost 25 percent,” says Claus Zieler, senior vice president and head of commercial operations of Bayer Pharmaceuticals Division Asia/Pacific.

An important aspect of these treatments is patient compliance, according to Zieler.

Studies have shown that many patients in Asia sometimes stop taking their medicines when they think they feel better. This could negate the benefits they derive from the medicines.

Bayer also disclosed the results of its latest innovations in cancer treatment. Among them is the drug Stivarga, which has received regulatory approvals in Vietnam, Malaysia, Singapore and Thailand for advanced liver cancer.

Results of trials showed that Stivarga significantly extended the lives of patients.

Patients who received a consecutive treatment of Nexavar (a targeted therapy approved in 2005), followed by Stivarga, lived an average of 26 months more.

Another cancer treatment from Bayer is the oral precision therapy Larotrectinib, which has been granted accelerated approval in November 2018 by the US FDA for the treatment of adult and pediatric patients with tropomyosin receptor kinase (TRK) fusion cancer.

Bayer cited the case of a two-year-old girl with infantile fibrosarcoma. After two cycles of chemo, leg amputation was deemed the only option for her. However, upon being treated with four cycles of Larotrectinib, the tumor was seen to have shrunk to a size small enough to be surgically removed. Her leg was saved from amputation.

Bayer has submitted Larotrectinib for regulatory approval in Taiwan and plans to submit it in Asia-Pacific countries, including Singapore, Australia and South Korea.

Meanwhile, it will be made available to patients in these countries who need treatment through early access programs approved by local health authorities.

“We are working hard to address the healthcare burden in our region by bringing new and better treatments to patients,” said Dr. Chuan Kit Foo, head of Medical Affairs, Bayer Pharmaceuticals Division Asia/Pacific.

As part of these efforts, Bayer has gone into partnership with NUS Enterprise, the entrepreneurial arm of the National University of Singapore.

During a recent forum in Singapore, both groups explained that this initiative called Healthy Hearts, Healthy Aging aims to bring together various sectors to examine the role of health innovations in preventing serious cardiovascular events such as strokes and heart attacks among the elderly.

As part of their collaboration, Bayer will draw on NUS Enterprise’s expertise and experience to develop a report that will examine the CV health imperatives associated with aging populations across Asia/Pacific.

With this report, Bayer and NUS Enterprise hope to create more awareness in the development and adoption of novel medical and technological solutions to meet the needs of CVD patients and their caregivers.

The forum also highlighted the role of digital and technological innovations in supporting seniors and their caregivers in managing CVD. Elderly patients with AF face many challenges in managing their condition, said Vernon Kang, chief executive officer of the Singapore Heart Foundation.

“A reliable and easily accessible resource or application will not only empower AF patients and their caregivers with the right knowledge on their disease, but will also encourage them in taking an interest in actively monitoring their medication adherence and minimizing their risk of an AF-related stroke.” —CONTRIBUTED