Girl lost everything but has more to give | Lifestyle.INQ ❮ ❯ 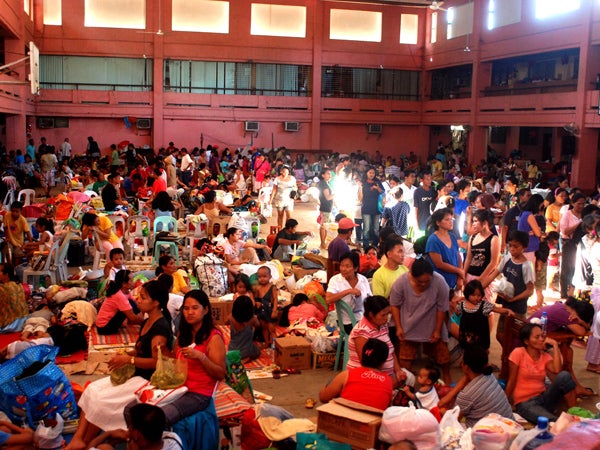 ‘SENDONG’ SURVIVORS. Cramped in an evacuation center in Cagayan de Oro City, survivors struggle to live and deal with the trauma of losing loved ones and properties. INQUIRER FILE PHOTO

Girl lost everything but has more to give

She was sure the woman perched above them in the large acacia tree had heard her through the roar of the floodwaters. “I can stay down here, but please take my sister,” she added, holding 7-year-old Janie as high above the churning black tide as she could.

“We can’t. There’s no more room!” came the woman’s reply.

Barely two hours earlier on that night of Dec. 16, members of Apple’s family had gone to bed in their tiny house on Isla de Oro, situated in the middle of the Cagayan River in Cagayan de Oro City.

Tropical Storm “Sendong” (international code name: Washi) brought hard rain that evening, and the river had swelled a little. Despite the still fresh memory of the 2009 flooding, the river did not seem to pose a threat.

But the rain continued to pour and the river continued to swell. Shortly after 9 p.m., Apple’s mother, a shrimp vendor at the market and the family’s breadwinner, her father, and eldest brother went to the barangay hall to seek word on the situation.

Within that time, however, the river suddenly poured into the streets, neck-high, and barangay officials prevented people from returning home on foot.

Back home, neighbors were calling to Apple’s family to flee to safety. Many climbed to their roofs when the floodwaters reached the second floors of their homes.

Apple had three younger siblings in her care, but lost all presence of mind when the power went out. A wave of terrified cries came up in the neighborhood as the world lost its color, with gray rain pouring in sheets from above and black waters raging below.

In the darkness, the groan of wooden beams and the unearthly clamor of corrugated iron sheets flapping in the wind amplified the children’s terror. A neighbor’s house was uprooted by the flood that engulfed it and carried downstream until it crashed violently against their house.

Shaken by the impact and the rushing tide and debris, the central beam of the house gave way, the second floor tipped over, and everything was plunged underwater.

Apple thought it was the end. But she grabbed her siblings and the statue of Mother Mary from the family altar, and led them in swimming through the current.

Living in the middle of the Cagayan River had taught each of the children to swim, and that night would test their skill to the fullest. They found their way out through a window and up to the surface, where they clung to a neighbor’s house as they surveyed their surroundings.

The river had claimed their community. Everywhere, people were wailing for help in their houses, scrambling to or falling off their roofs, and being violently swept away.

“I saw a neighbor putting his baby in a Styrofoam icebox to keep him above water,” Apple recalled. “But the icebox tipped over and the baby was gone instantly.”

From roof to roof

Meanwhile, Apple’s parents and the rest of the family, 77-year-old grandmother in tow, had made it back. They pulled everyone up to a neighboring roof, and thereafter scrambled from roof to roof, the father practically wearing the youngest children around him as houses fell apart.

The river, the daily source of livelihood for most of the community’s residents, demonstrated its malevolence. It smashed against houses, foaming and filling the hollows, and simultaneously uprooted and pulled the walls apart from the inside, producing jagged debris that barreled toward other houses and people caught in the current.

Apple found herself and Janie being thrown about in the waters, separated from the family.

The acacia tree stood in their way downstream and they latched on for dear life. Janie was cold and tired, and Apple had to let go of the statue of Mother Mary so she could hold her sister.

She observed that some 30 others had made it to safety in the upper branches, and not knowing how much longer she and Janie could hold on, she begged them to take her sister. But she was refused.

Exhausted, Janie suggested that they drift downstream to find a safe place. But Apple was sure that letting go would be the death of them.

She could see her neighbors and playmates tossing in the river, bobbing up and gasping for breath only to be lost as quickly beneath the tide. Others stretched out an arm and cried for help she could not give.

As startling as it was terrifying were the things she could feel brushing against her legs: Debris and shards would sting, but she knew flesh from rubbish when she felt it, or hair from grass.

“There’s nothing we can do,” she sobbed to Janie, and somehow they understood that the others up in the tree wept too.

The flood receded as quickly as it came.

Clutching each other, the sisters sloshed through the mud and found a plastic bag tied in a knot and containing clothes that, blessedly, were dry. They quickly changed into the clothes, heedless of all else but the need to keep warm.

Its owners must have lost the bag while fleeing, the way Apple lost the one item she had thought to save.

Apple would later find out that the flood that had bulldozed her community was now at work farther downstream, bringing about more death and misery.

At first light, Apple saw the dead littering the muddy expanse. When she saw her father, he was already well on his way rushing toward her. His clothes were torn and he had cuts and bruises on his shins and shoulders.

Everyone, including her grandmother, followed close behind him. Together, they made their way home.

The roof seemed to have been lost in one piece, and all that was left standing was the stairwell.

The survivors lost two homes—the one where they lived in and the one they were about to build.

The father had purchased a small lot away from the river and its hazards, and was preparing to begin building a new home. Plywood and galvanized iron sheets had been stocked in their house, only to be lost in the flood.

“It’s sad that we lost the house, but what’s important is we all survived,” Apple said.

Noon of Dec. 17, the family made it to City Central School, which, like many other public schools in Cagayan de Oro, was designated an evacuation center.

Conditions were hard. It was terribly warm in the evacuation center, and sanitation and waste disposal immediately became a concern.

Apple had to tend to her younger siblings—a situation common among families where the parents had to queue for relief goods or salvage items from the remains of their homes.

It was at the school that Apple first encountered ChildFund, a nonprofit group committed to help impoverished children who have the capacity to become young adults, parents and leaders that will bring lasting and positive change to their communities, as well as promote societies where children’s worth and rights are valued, protected and advanced.

A passenger jeepney rolled into the evacuation center. Young people in green shirts and carrying plastic boxes and large tarpaulin mats emerged, laid the mats in a paved courtyard near the kindergarten, and invited the children to play.

It was the first Child-Centered Space (CCS) established at City Central School. Apple watched as the children played, drew pictures and sang songs together. She found herself wanting to join them, but ended up taking Janie to the group.

Janie returned to the space allotted to her family wearing a hat made from a newspaper page. She said the children made paper hats at CCS, and though she couldn’t follow the instructions, one of the ates and kuyas (big sisters and brothers) made one for her.

Janie had her family’s permission to attend CCS every day. Apple saw how Janie would return full of stories to share. The few times Apple came by to observe, she found herself wanting to join the activities.

But soon after New Year’s Day, the ChildFund jeepney did not show up. Apple later learned that the ates and kuyas had to go back to school and could not come anymore.

She was happy when ChildFund’s local partner spread word at the evacuation center inviting young people to train to become the next batch of youth facilitators. While earlier she only watched in admiration, she now had an opportunity to be an ate to more than just Janie.

Apple attended a two-day workshop that initially helped her process her own experience and gave her the fortitude to help other children deal with theirs. She and other youth and parent volunteers also learned how to host specific activities according to ChildFund’s CCS manual.

Best of all, she got the chance to play many games in the course of her training. “I had so much fun at ChildFund’s workshop,” she said.

Though she had just survived harrowing circumstances, saving her sister in the process, Apple had not, until then, become aware of the need to be brave, or that she must have been very brave to endure her ordeal.

Now, Apple is helping other children heal by becoming a volunteer at the Child-Centered Space.

She may have lost her home and all her belongings in the flood, but the fact that she and her family are intact is her first consolation.

Through CCS, she has also found that as long as she has more to give, she cannot ever say that she has lost everything.