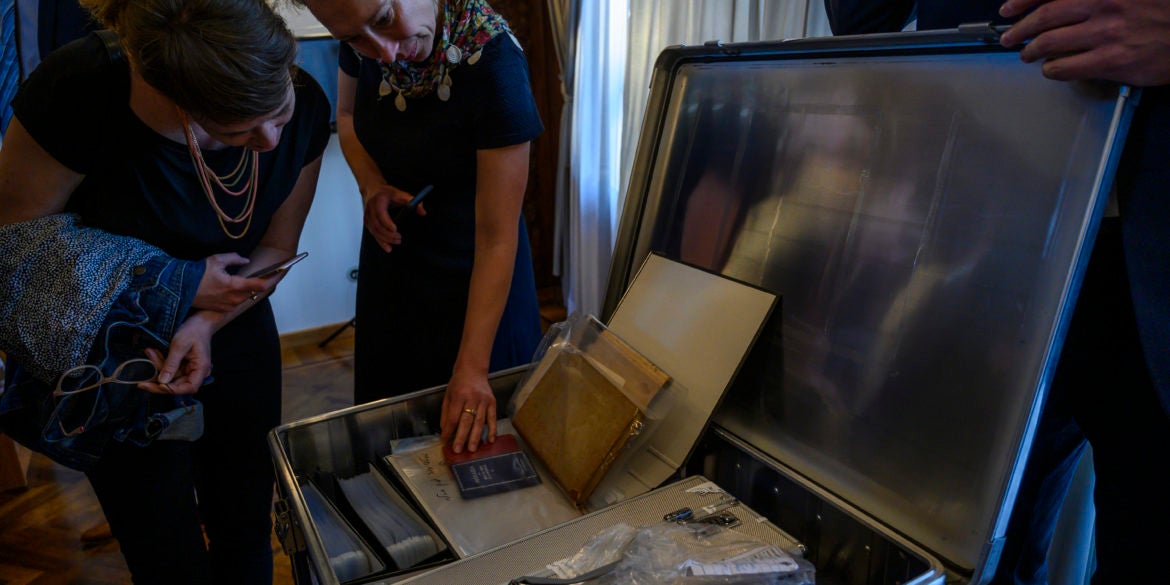 Guests look at papers and manuscripts belonging to Max Brod, the friend and literary executor of Czech writer Franz Kafka, on display at the Israeli embassy after the stolen items were handed over to the Israeli ambassador by Germany's Bundeskriminalamt, in Berlin on May 21, 2019. - German police on May 21, 2019 handed over to Israel thousands of stolen papers and manuscripts belonging to Max Brod, who died in Tel Aviv in 1968, and who is primarily responsible for Kafka's success as one of the 20th century's most influential writers, having published many of his works after the writer's death in 1924. (Photo by John MACDOUGALL / AFP)

By: Ryland James via Agence France-Presse

German police on Tuesday will hand over to Israel thousands of stolen papers and manuscripts belonging to Max Brod, the friend and literary executor of Czech writer Franz Kafka.

Brod, who died in Tel Aviv in 1968, is primarily responsible for Kafka’s success as one of the 20th century’s most influential writers, having published many of his works after the writer’s death in 1924.

Prague-born Brod had fled from Adolf Hitler’s Nazi regime to Tel Aviv in 1939, carrying Kafka’s estate in his suitcase, even though the writer of “The Trial” had insisted his works be destroyed after his death.

A ceremony in Berlin at the residence of Israeli Ambassador Jeremy Issacharoff on Tuesday will see German police hand thousands of Brod’s personal papers over to the National Library of Israel.

It will end a decade-long struggle to retrieve the missing Brod papers which, according to Israel’s National Library, were stolen 10 years ago in Tel Aviv.

The documents, letters and memoirs re-emerged in 2013, when two Israelis approached the German Literary Archives in Marbach, and private collectors, with a huge collection of unpublished documents belonging to Brod.

The significance of the papers, including a postcard from Kafka sent to Brod in 1910, quickly emerged and they were confiscated after an attempted sale.

“The authorities were notified and it became clear that the some 5,000 pages of documents were part of Brod’s private archive and had been stolen,” the Israeli embassy in Berlin said in a statement.

Last January, a court in Wiesbaden ruled that the papers should be handed back to Israel’s national library.

“The correspondence found in the archive is extensive and impressive,” said Dr Stefan Litt, the library’s archivist and humanities collection curator.

“It can be characterised as a type of ‘who’s who’ of the European cultural world in the first four decades of the twentieth century.”

The manuscripts, including unpublished passages from Brod’s diary and early correspondence with his wife, could provide further insight into the life of Kafka, whose best known works also include “The Castle.”

When Brod died in 1968, he left his personal papers and Kafka’s manuscripts to his secretary Esther Hoffe.

After her death in 2007, aged 101, the papers went to her daughter Eva, from whom part of the collection was stolen.

Over time, the collection was split into three locations: an Israeli bank vault, a Swiss bank safe in Zurich and Eva Hoffe’s flat in Tel Aviv.

According to reports, she lived with nearly a dozen cats with the priceless collection of papers partly stored in a switched off refrigerator.

Some 35 boxes of the Kafka/Bord archive were removed from her flat when she died in 2018.

The return of the papers on Tuesday will be the latest milestone in the Max Brod Archive saga.

Courts in Israel, Germany and Switzerland have determined the archive should be safeguarded at Jerusalem’s National Library where, in accordance with Brod’s wishes, it can be preserved and made available to the public.