Fresh off the debut of their first project, DiCaprio and Pitt look forward to working together again | Lifestyle.INQ ❮ ❯ 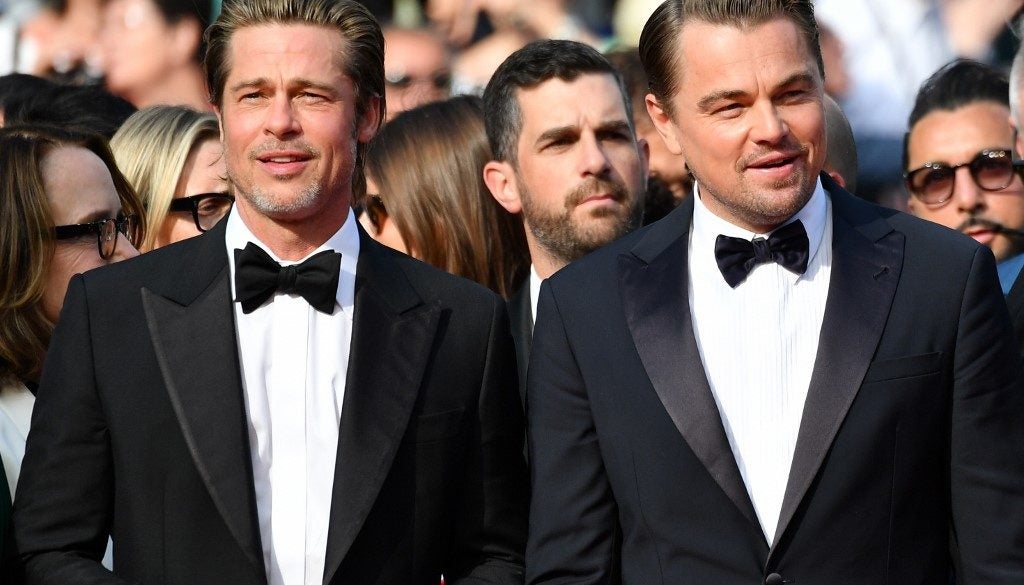 US actor Brad Pitt and US actor Leonardo DiCaprio arrive for the screening of the film "Once Upon a Time... in Hollywood" at the 72nd edition of the Cannes Film Festival in Cannes, southern France, on May 21, 2019. (Photo by Alberto PIZZOLI / AFP)

Fresh off the debut of their first project, DiCaprio and Pitt look forward to working together again

Leonardo DiCaprio and Brad Pitt said Wednesday they had to tap into distant memories of being Hollywood outsiders for their star turns in Quentin Tarantino’s new movie, calling it a “love letter” to the industry’s dreamers.

Speaking after their movie Once Upon a Time… in Hollywood was rapturously received at the Cannes Fillm Festival, the A-list actors said they bonded on set over fame’s surreal strangeness and hoped to work together again.

“There was an incredible ease and comfort getting to work alongside Brad, we kind of grew up in the same generation, got our start around the same time,” Di Caprio said.

“Quentin gave us this incredible back story for our characters… their work together, their friendship together, what they’ve been through in the industry together.

“All that fed into the incredible comfort and ease that I think he and I had with one another.”

In the dark fairytale set in the Los Angeles of 1969 just before the Manson murders, DiCaprio, 44, plays a fading television western star with Pitt, 55, his stunt double and off-screen sidekick.

DiCaprio called the movie by the director of Pulp Fiction and the Kill Bill movies a “love letter to the outsiders of the industry”.

He said his and Pitt’s high-flying careers had long run in parallel until they finally converged thanks to Tarantino.

“When Quentin puts you into these improvised scenarios… it was incredibly easy working with Brad. We forged hopefully a great cinematic bond in a film about our industry,” DiCaprio said.

Pitt said remembering what it was like as young actors on Hollywood’s fringes, and later dealing with the often bizarre world of mega-celebrity led the two actors to bond.

“It was really great fun, I had a great laugh with him. It’s that thing of knowing you’ve got the best of the best on the opposite side of the table holding up the scene with you. And there’s a great relief in that,” he said.

“As Leo said, we have the same reference points… we’ve been going through this at the same time, have similar experiences to laugh about. I hope we get to do it again.”

“In the time building up to that, there was a free-love movement, there was a lot of hope, there were a lot of new ideas floating out there, cinema was being recalibrated,” he said.

“When that event happened and the tragic loss of Sharon and others — it quite scared people. That’s why it lasts so much today I think because it’s a sobering, dark look at the dark side of human nature. That pivotal moment was a real loss of innocence and that’s what the film so beautifully addresses.”

Robbie, who wore double braids framing her face in tribute to Tate’s hairstyle during a 1968 visit to Cannes, said she felt an obligation to do justice to the late actress.

“Quentin said it to me early on — she’s the heartbeat of the story. I just saw her as a ray of light,” she said.

“I felt like I could honor the memory of real-life Sharon Tate who so many people said was such a bright light.”

Although they had never worked together before, both Pitt and DiCaprio have starred in films by Mexican director Alejandro Gonzalez Inarritu, who heads the Cannes jury this year.

It took decades for each to finally win Oscars, after always falling short despite multiple nominations.

DiCaprio finally won best actor in 2016 for Inarritu’s The Revenant while Pitt took home the statuette in 2014 as a co-producer of Best Picture, 12 Years a Slave.

The festival runs until Saturday with the awarding of the Palme d’Or top prize.