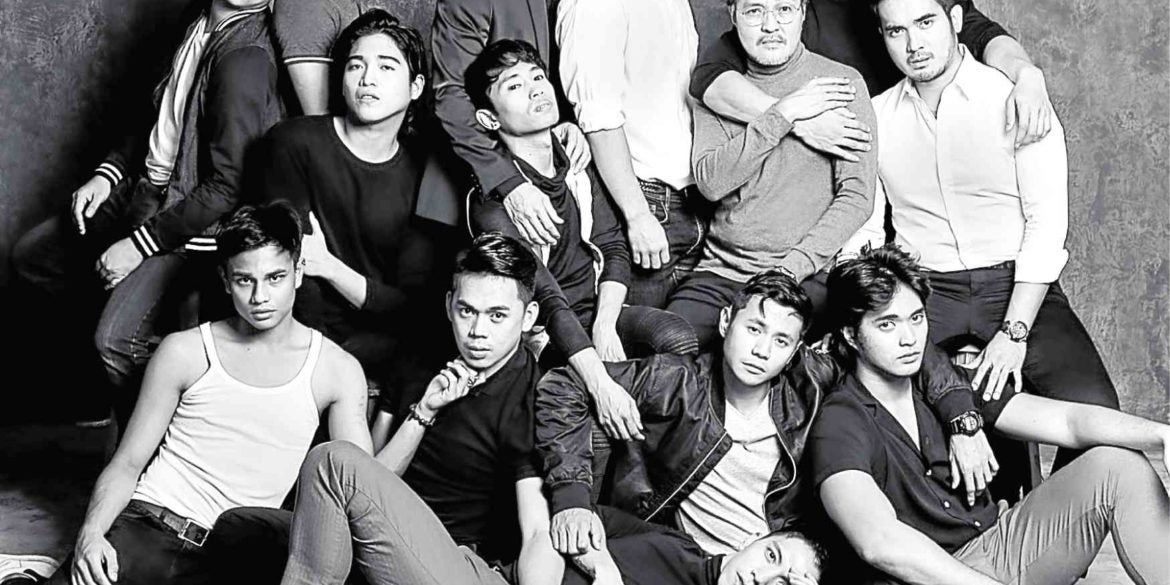 The ensemble of “Laro” —JAY VELASCO

On deck is ‘Roses for Ben,’ billed as the first HIV-awareness gay musical

Pride Month at Arts Above? That’s the idea behind Artist Playground’s (AP) programming for June—well, sort of.

“There was this group that planned to put up a pink theater festival, and the organizers wanted AP to host,” says artistic director Roeder Camañag. “But for some reason, this is no longer pushing through.”

Quintos’ version, however, transports the story to present-day Manila and turns all the characters into male homosexuals.

“A bracing meditation on identity, longing and survival” was how Gibbs Cadiz, Inquirer’s theater critic at the time, described “Laro” in his review of the play’s premiere more than 14 years ago. Among other things, that production, directed by the playwright himself, was defined by “dialogue that’s remarkable for its clarity as for its casual, if bitter, truth,” exposing the “small but volcanically complex gay society [as a place where], for all its surface urban freedom, tribal passions still reign and the terrain of kindred connections often feels like a battlefield.”

For John Mark Yap, director of AP’s “Laro,” that terrain has remained more or less the same. “It’s quite alarming, to be honest, that the gay community is still experiencing the same challenges and struggles from more than a decade ago. The issues discussed in the play such as sexual predation and power play are still very prevalent.”

Staging the play is a wish fulfilled for Yap, who was still a minor when “Laro” premiered in late 2004. “I played the role of the Young Gentleman when Tanghalang Ateneo staged ‘La Ronde’ in 2010,” he says. But he only got to read Quintos’ adaptation in 2014, when he served as project manager for the book launch of the playwright’s two-volume collection of plays.

“I first worked with AP in 2016 as a graphics designer, and in one of our encounters, Paul Jake Paule and Sir Roeder said I should direct for their company. I was honestly very hesitant since I’m more known in the industry as a stage manager, and it was only last year when I told them I was finally accepting the challenge of directing.”

For “Laro,” Yap has assembled, through personal invitation, what he calls “an all-star cast”—a mix of stage veterans such as the multihyphenate Vincent de Jesus and Phi Palmos, and relatively fresh products of the campus theater circuit like Jon Abella and Vincent Pajara.

Following “Laro’s” two-weekend run, AP will stage “Roses for Ben,” which the company bills as the first HIV-awareness gay musical in the country, with Camañag directing.

“‘Laro’ should serve as a prelude to ‘Roses for Ben,’” Yap says. “June is Pride Month so it’s definitely the best time to stage these plays about the gay community.” —CONTRIBUTED