David Endriga and Catherine Huang: ‘I love you just the way you are...’ | Inquirer Lifestyle ❮ ❯ 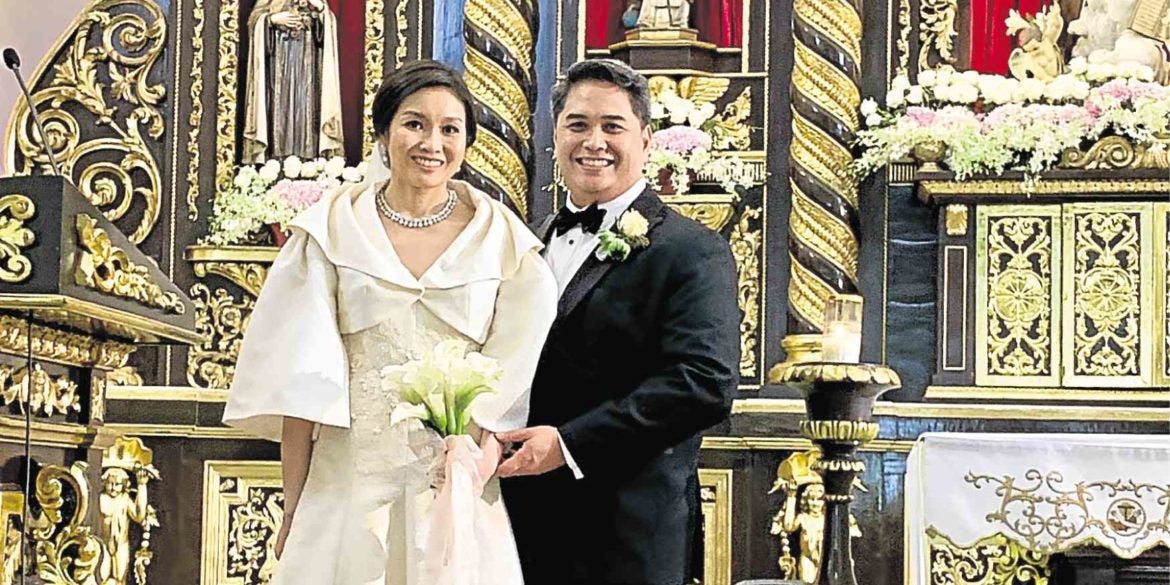 Dr. David and Catherine Endriga after the wedding rites

David Endriga and Catherine Huang: ‘I love you just the way you are…’

Don’t go changin’, to try and please me…,” crooned the groom as he played the keyboard. Soon a few guests were singing along with him, as his bride beamed shyly at the side. “… I love you just the way you are.”

Never have we seen such romance coming with such compatibility of character, like it did in the union of Dr. David Endriga and Catherine Huang last Sunday at Santuario de San Antonio Church in Makati.

Romance with a good head on one’s shoulders—that about sums up the partnership of this young couple, and in this day and age of fleeting relationships, that is a precious find. Friends, albeit distant, since their post-teens, Endriga is an orthopedic spine surgeon making a name for himself, and Huang, as the scion of the country’s leading retail chain family, is the general manager of the global brand Marks & Spencer in the Philippines.

But what was curious in the fun reception that followed at the Shangri-La at the Fort was how friends and family noted, so happily, not only their love story, but also how they complement each other’s character: Endriga’s extrovert personality to Huang’s introvertedness. Yet both pursue their passions with quiet determination.

In the toast at the reception, the groom’s father, Baltazar Endriga, known in local finance and education, and as former president of the Cultural Center of the Philippines, observed how his son, his eldest child, pursued the courtship with “intense quiet and focus,” as he does everything else, from playing musical instruments such as the guitar (for flamenco music) to medicine.

That’s on one hand. On the other hand, her cousins comment on how low-key and shy Huang is, yet with a sense of adventure and strong drive. I still remember how sometime ago, she described to me the extreme fitness travel adventure she dared take on with friends.

The youngest child and only daughter of Commonwealth Foods head Anthony Huang and SSI and Rustan’s chair Zenaida “Nedy” Tantoco, Huang—who’s stayed behind the business/social scenes all this time, behind her elder brothers Anton and Michael—is obviously well loved by her cousins in the huge Tantoco clan and by her devoted friends.

It was so touching how her cousin and best friend, Jaime Pineda, sang for her “Sunrise, Sunset” (from “Fiddler on the Roof”) at the reception, and how he could sing.

The shy bride wore a warm but still shy smile as she began her walk down the aisle on the arm of her father. Her hair held back in a bun, she was in a traditional maria clara by Rustan’s designer Jojie Lloren, its skirt with a full but subtle callado layer of piña, its top of the traditional baro’t saya.

But moments before that walked in—more like jaunted in—the groom, flashing a full smile. That was one happy groom, not at all nervous but connecting to the guests from the pews that were marked with big clusters of white and pink roses and dangling skirts of sampaguitas designed by Pam Lopez of Rustan’s Flower Shop.

Minutes before the bridal procession, Ambassador Bienvenido Tantoco, the 98-year-old patriarch of the clan, took his place in the pew to witness this milestone.

Main celebrant Fr. Tito Caluag, in his homily, so correctly defined love as a mission, love as action, and enjoined the wedded couple to make it so. (Co-celebrant was Fr. Adolfo Dacanay, SJ).

Not over the top

At Shangri-La at the Fort, there were enough guests to fill the ballroom, elegantly decked with pastel blooms, not over the top. The big gathering was a power crowd of diplomats, business, friends and relatives, and most notably, the music and culture cognoscenti.

The groom, who moves in the music circle, invited his musician friends. Baltazar and his wife Tessie Endriga have built strong relationships in the culture industry the past decades—they are regulars at concerts, exhibits, arts dinners, with Tessie usually a lively conversationalist at the table. Nedy, for her part, is also a committed mover of the arts, at the helm of the CCP board, the Phil-Italian Association, among others.

In truth, it was the common culture involvement that brought the two families together as early as two decades ago. Nedy would host regular dinners at home, and on New Year’s Eve, would invite her friends and their families over to greet the year.

This was how David and Catherine came to be in the same social orbit. They would be in those dinners, but no romance bloomed, because they were seeing other people, until, one day, as the elder Endriga noted in his reception toast, his family didn’t know anything was afoot in his love life—but noticed he was “working out in the gym a lot more.”

At around the same time, Catherine, her friends observed, was being extra cheery and blooming. The romance was beginning to blossom. And the elder Endriga could heave a sigh of relief that his son wasn’t destined to grow old a bachelor—he who’s devoted his full time to medical training in the US and Japan.

Catherine herself, who pursued her MBA at the Manchester Business School in the UK, found time for love.

And love sealed a couple’s complementary character. Not even Billy Joel could have captured their character in a song.