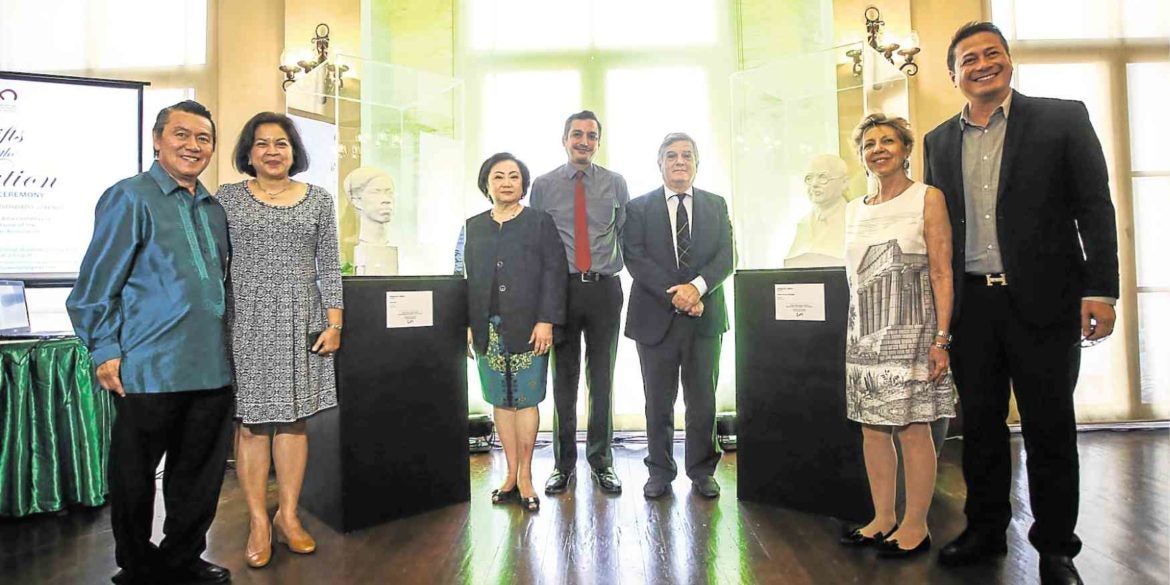 ‘His brushwork could be described as vigorous, sturdy and virile’

Diosdado Lorenzo’s “Kiss”—or one-half of it, anyway, since it is one of a pair—is a portrait of the artist as a young man.

Sculpted by the artist himself during a sojourn in Italy in the early 1930s, when he was still in his 20s, the plaster of paris head offers a window into how the artist viewed himself.

From the strongly emphasized Malay features—the high cheekbones, full lips, firm brow and thick head of hair—one might guess that he held on to his identity as Filipino, even as he explored a novel and stimulating foreign culture.

From the stern brow and intense gaze, one might read a strong personality and an extraordinary self-possession. It is the face of a young man who knows himself and where he wants to go.

Viewing the head from the side, the onlooker might detect a slightly pugnacious cast to the jaw, indicating self-confidence and a healthy amount of ambition.

All this is guesswork, of course. But the artist’s life and recollections of those who knew him would seem to confirm most of it.

After finishing his fine arts studies at the University of the Philippines, Lorenzo (b. 1906) traveled to Italy to attend the Academy of San Luca. There he became fast friends with fellow academy student Mario Costamagna, and was practically adopted by his family.

The other statue of the pair titled “Kiss” is a portrait of Mario’s father, Emilio, also done in plaster of paris. Lorenzo intended them to be displayed together to commemorate the bond that had developed between himself and the Costamagna family. They became cherished family heirlooms.

Meanwhile, Lorenzo met and married Lina Paolini in Rome in 1933, and started a family. With their eldest son Emilio, they returned to the Philippines, just in time for Diosdado to plunge into the artistic ferment of the immediate pre- and postwar period and become one of the legendary “13 moderns” who rebelled against the stodgy academicism of their seniors, and opened up new vistas of artistic expression.

Lorenzo became particularly close to two of them, Galo B. Ocampo and Victorio Edades. All three later taught fine arts at the University of Sto. Tomas.

Last May 23, Lorenzo’s “Kiss” came home to the Philippines when the pair of statues was donated to the National Museum by the heirs of the Costamagna family, through the agency of the Philippine-Italian Association. (See “From Italy With Love,” Inquirer Lifestyle, 05/22/19.)

The unveiling was attended by the artist’s children and grandchildren, who shared some of their insights on Lorenzo, who remains one of the more enigmatic, and perhaps unfairly overlooked, of the 13 moderns.

Judging from their recollections, the impression of a strong, forceful character given by Lorenzo’s self-portrait seems to be borne out.

“His presence alone commanded respect and attention,” recalls his grandson, Alessandro Villaraza, who, as a child, used to sneak into his grandfather’s studio to watch him paint, much to the latter’s annoyance, since he liked to be alone when he worked.

“He was a disciplinarian,” recalls Dr. Emilio Lorenzo, the artist’s eldest son. “He made it a rule that we should all speak in Italian in the house. It was forbidden to speak in Tagalog. That’s how we learned Italian.”

Their mother, Lina, was the pacifier, recalls Mariella Villaraza, the artist’s daughter. When their father was away, their mother, who spoke the language fluently, allowed them to revert to Tagalog.

Her father remained a prolific painter until his death in 1984, says Mariella Villaraza.

“He would go down to his studio to paint, even if it was 1 a.m.,” she recalls. “Nothing stopped him.”

His style continued to evolve, says Dr. Lorenzo. When his health began to fail, his colors became lighter and his brushstrokes finer.

“He is less recognized by the art community, by lay people, than his friends Galo Ocampo and Victorio Edades,” he adds. “My father did not think he should advertise himself. He thought people would eventually appreciate his work.”

Since most of the artist’s works remain with the family, and in private collections, there have been few opportunities for the art public to see Lorenzo’s paintings and sculptures.

In his remarks, the art critic Cid P. Reyes shared some of the insights on Lorenzo he gathered during an extensive interview with the artist.

“I asked him what it was about Van Gogh that attracted him,” recalls Reyes. “He answered, ‘The strength of his vision, the intensity of his colors and above all, the sincerity of his art.’”

These qualities could well be applied to Lorenzo as well, suggests Reyes. “His brushwork could be described as vigorous, sturdy and virile.”

Like Van Gogh, Lorenzo liked to paint landscapes. Mariella Villaraza recalls that her father liked going back to his hometown, San Isidro, Nueva Ecija, where he spent his early years in a nipa hut, to look for suitable landscapes to paint.

“In my estimation, Mr. Lorenzo went further than Edades because he not only had more control of material, but also a strong academic background,” says Reyes.

The artist was equally adept at portraiture.

“Lorenzo has to be counted as among the best portrait artists the country has produced. He said, ‘Only through painting is one able to capture more than the likeness. The important thing is to capture the character of the person.’”

Unlike many painters who are often surprised by their finished work, Lorenzo had a clear concept of what the painting would look like even before he began working, says Reyes.

“It is that journey from the mind to the hand to the brush and the pigment on to the canvas that is the critical theme of his creation,” he adds.