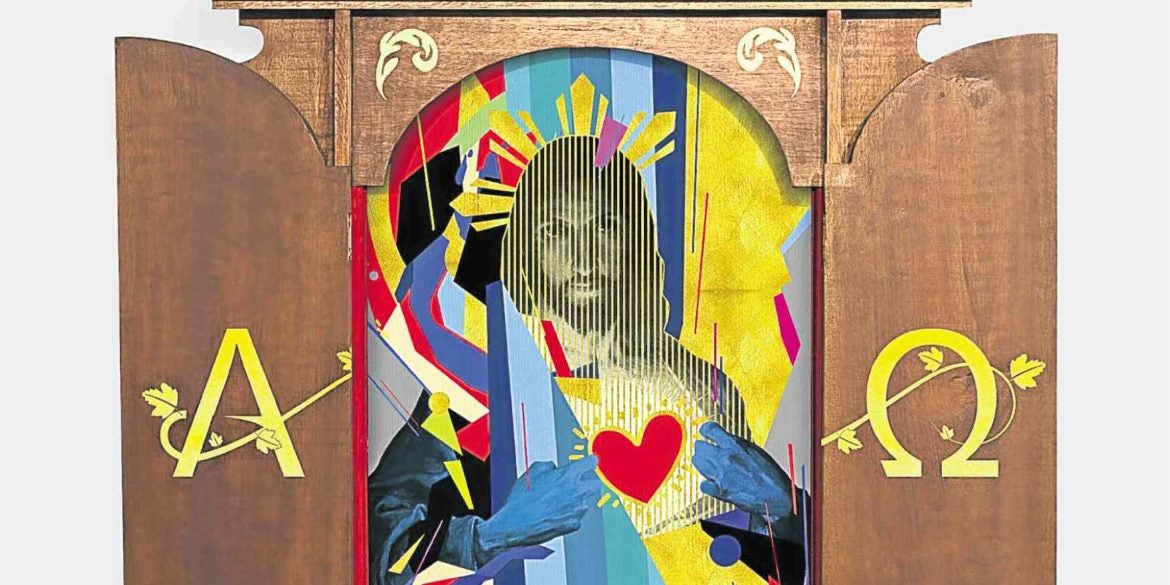 E.H. Gombrich in “The Story of Art” appears to have made the dialectic between Christian representationalism and iconoclasm, noting the early Christians’ depiction through images of episodes from the Scriptures and the Iconoclastics’ revolt and their insistence on abstract symbols and patterns to depict the faith since they considered representation of sacred figures as idolatry.

The dialectic is at the heart of Wilfredo Offemaria Jr.’s “Abstraction / Obstruction: A Discourse on Faith,” running at the NCCA (National Commission for Culture and the Arts) Gallery until May 31. In the National Heritage Month exhibit of paintings and sculptures and art installations, Offemaria blends well-known Christian iconography with contemporary popular-culture imagery, more or less abstract, such as cartoon hearts, multicolored grid lines, and brand trademarks.

“My Haring Heart” is an ode to Keith Haring’s brand of pop art with the use of his signature “Love” series of illustrations. Offemaria indulges in some wordplay here as “Haring” in Filipino means “Hari” or “King,” which is how Christians in the Philippines call the Christ. In this case, the figure of Jesus is crowned with the national flag’s sun rays. Offemaria seems to ask: Is faith an abstraction or obstruction?

The question is immediately raised when one enters the exhibit, which opens with the installation, “Guiding Block,” seemingly nothing more than a pedestrian lane that either guides the viewer to the show or poses as a stumbling block, much like religious belief. In much the same way, title cards mimic the exit path of a building; they constitute both ingress into and egress out of the exhibit.

Bauhaus-esque lines are prominent in the collection, especially in the main abstract works, such as “Quis Ut Deus” and “Pieta.” One would mistake the lines, for example, in “Hear Me,” as either pedestrian lanes or jail bars. Offemaria seems to ask, is faith a guide or an imprisonment?

In other works, Offemaria conjures the entrancement that technology affords, which seems to challenge religion’s old power to enchant and to impress. In “First Byte: The Fall of Man,” the artist contrasts the story of Adam and Eve and the Apple logo, making technology as the forbidden fruit that causes the fall of man—or his liberation.

So does Offemaria look at science negatively? If one were to kneel facing the fiber-cast bust of Christ from his “Sacred Heart” series, one would see “First Byte: The Fall of Man” behind it, and the painting would adorn the sculpture with its halo-like rings while removing the symbol of man’s first sin in the form of the Apple logo.

A devout Catholic, Offemaria provides orthodox works such as “Scutum Fidei – Shield of the Trinity,” showing the Holy Trinity as the Sign of the Cross and the genesis of prayer. On the floor are strewn liturgical prayers as “Dona Nobis Pacem” and “Miserere Nobis,” with the latter parallel to “The Fall of Man,” signifying the artist’s belief in mercy and forgiveness.

But in most of the works, Offemaria emphasizes faith and inquiry, devotion and interrogation. —CONTRIBUTED