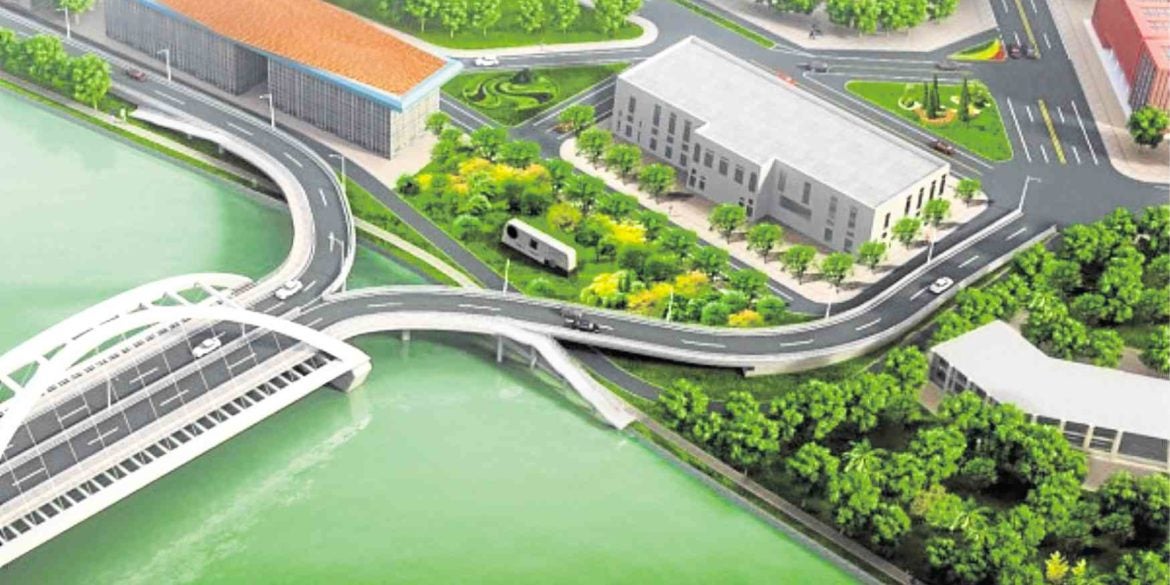 DPWH’s own drawing shows the bridge has two ramps thatwill encroach on Intramuros, the buffer zone of Unesco World Heritage listed San Agustin Church, the oldest church in the Philippines.

But heritage advocates say bridge continues to be built

The controversial China-funded project to put up the Binondo-Intramuros Friendship Bridge, which may cause the delisting of San Agustin Church and other Philippine Baroque churches from the United Nations Educational, Scientific and Cultural Organization (Unesco) World Heritage List, has been suspended pending the submission by the Department of Public Works and Highways (DPWH) of technical studies on the potential archeological and cultural risks of the construction, according to the National Commission for Culture and the Arts (NCCA).

The DPWH must also redesign the bridge.

But heritage advocates disputed the NCCA report and said construction was continuing.

“The studies (by the DPWH) are supposed to be pending,” said heritage advocate and former Unesco Philippines commissioner Eriz Zerrudo, “but why is construction continuing? May construction pa ‘di ba?”
“Am sure lalabas diyan (in DPWH studies) walang impact sa Intramuros,” he added, “so tuloy ang bridge.”
The suspension is disclosed in the “statement of conservation report” of the NCCA to the Unesco, which posted recently the document on its website.

NCCA is the site manager for the churches of San Agustin in Intramuros, Paoay in Ilocos Norte, Santa Maria in Ilocos Sur, and Miag-ao in Iloilo, collectively listed in the Unesco World Heritage List as “The Baroque Churches of the Philippines.”

In its reply to Unesco through the Unesco National Commission of the Philippines (Unacom), NCCA admitted that the planned bridge would affect the northeast edge of the buffer zone of San Agustin Church, particularly on Riverside Drive and Solana Street.

Buffer zone for San Agustin is the whole of Intramuros, including half of the Pasig River from Del Pan and Jones Bridges, according to NCCA officials.

Construction of the bridge will also increase traffic pressure on Intramuros.

Violation of the buffer zone proviso will put San Agustin Church, the oldest church in the Philippines, and three other inscribed Baroque churches in danger of being stricken from the prestigious Unesco World Heritage List.

NCCA explained the bridge had been put on hold as the DPWH was redesigning it to minimize its impact on Intramuros.

DPWH is likewise doing an archaeological and heritage impact assessment (AHIA) to assist the cultural agencies in identifying the impact of the bridge to the outstanding universal value (OUV) of San Agustin Church, said the NCCA.

NCCA told Unesco it had taken a number of steps to address concerns, such as the “alleged … additional traffic volume that might affect the OUV of the church.”
NCCA said the Intramuros Administration (IA) was implementing the policy of “light vehicle traffic only” in Intramuros.

IA, it added, is crafting the Conservation Management Plan of the Walled City “which would define and clearly elaborate on what measures are to be undertaken to conserve Intramuros and control and optimize different variables such as traffic, tourism.”

“Accordingly, nearby heritage structure/s would be greatly considered for preservation and/or protection such as employment of mechanical stabilized earth wall and providing interface for possible reconstruction of heritage structures,” NCCA explained.

“The cultural agencies and IA are in continuous coordination with DPWH to ensure that the ongoing AHIA … would be finished as soon as possible and that the design changes being made would put the heritage structures in consideration,” it said.

Critics and heritage experts remain critical of the project.

He said that World Heritage Committee Operational Guidelines 172-174 requires custodians of Unesco Heritage sites to coordinate with Unesco and “do impact assessment studies.”

But Charles Salazar of the NCCA gave assurances that the NCCA was closely coordinating with Unesco.

Salazar admitted that based on the original design by DPWH, the bridge would encroach on the Intramuros buffer zone.

Heritage experts said the only way to redesign the bridge is to make it a pedestrian bridge. This has been in fact the recommendation of the Philippine branch of the International Committee on Monuments and Sites, an advisory body of international experts to the Unesco.

Experts said this was the remedy that was accepted by Unesco in the case of one of threatened Turkey’s Unesco heritage sites.

They warned that sticking to the original design would cost the Philippine churches to be delisted en masse.

They cited the Waldschlösschen Bridge which affected the Dresden Elbe Valley in Germany, resulting in the latter’s delisting in 2009. —CONTRIBUTED