The man who proved the existence of quarks | Inquirer Lifestyle ❮ ❯ 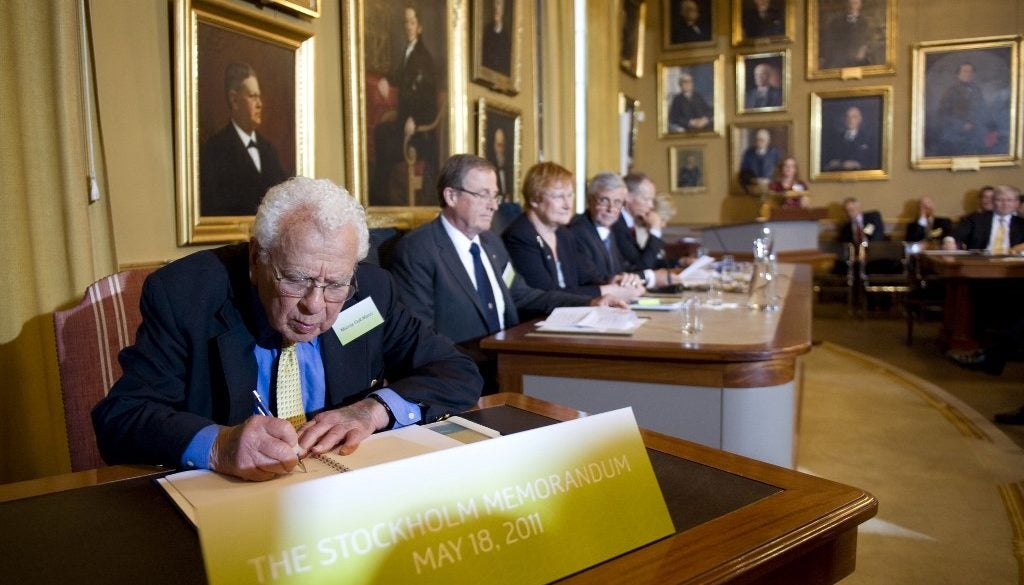 1969 Nobel Prize Laureate in Physics Murray Gell-Mann signs The Stockholm Memorandum during the third Nobel Laureate Symposium on Global Sustainability at The Royal Swedish Academy of Sciences in Stockholm on May 18, 2011. In addition to the Nobel laureates, leading scientists and environmental research group heads were on site to draft a Stockholm Memorandum on the findings of the meeting, which will be to the United High-level Panel on Global Sustainability. The panel will draw up a report with suggestions before the UN Conference on Sustainable Development in Rio de Janeiro in 2012. AFP PHOTO/JONATHAN NACKSTRAND (Photo by JONATHAN NACKSTRAND / AFP)

The man who proved the existence of quarks

Murray Gell-Mann, a physicist who theorized the existence of the quark and won a Nobel Prize for his method of classifying particles, has died at age 89, the California Institute of Technology (Caltech) said.

Considered among the most important physicists of the 20th century, the American scientist theorized in the 1960s that subatomic particles — protons and neutrons — were composed of paired subunits he called quarks.

Experiments later confirmed the existence of the particles, which are a continuing subject of study by physicists including those at the Large Hadron Collider, the world’s most powerful proton smasher straddling the French-Swiss border.

Amid an explosion of research into what makes up matter in the 1950s and 1960s, Gell-Mann came up with a criteria for putting particles in groups of eight based on characteristics like electric charge and spin.

He called it the “eightfold way,” Caltech said, and was awarded the 1969 Nobel Prize in Physics for the innovation.

Born in New York City on September 15, 1929, Gell-Mann was encouraged to study physics by his father, and earned a doctorate in the subject from Massachusetts Institute of Technology in 1951.

He taught at Caltech in Pasadena, California from 1955 until his retirement in 1993.

“Dr Gell-Mann had this clear vision and penetrating insight to look through the large amounts of data that were coming from experiments and make sense of it,” Hirosi Ooguri, a professor at Caltech and director of the school’s Walter Burke Institute for Theoretical Physics, said in an obituary published by the university.

“He opened a new paradigm in particle physics.”