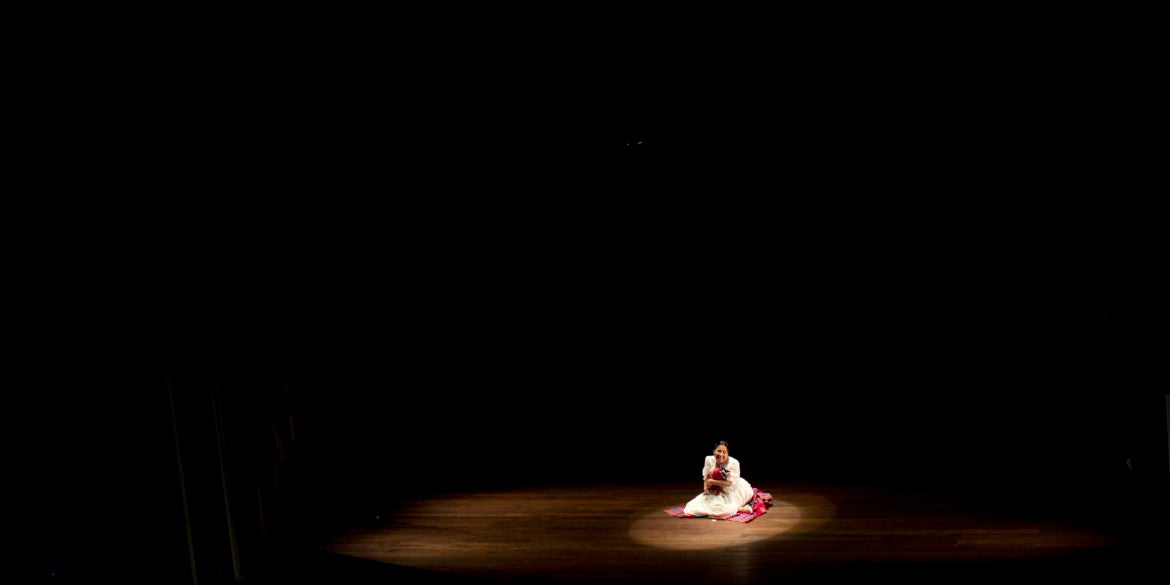 In this April 30, 2019 photo, Erika Andia, director of the theater group Kory Warmis or Women of Gold, performs holding a prop representing a newborn baby in the play "Kusisita," at the Municipal Theater, in La Paz, Bolivia. The theater group, which was founded in 2014, finds itself gaining an audience as waves of women mobilize to fight gender violence across the world. (AP Photo/Juan Karita)

LA PAZ, Bolivia — On stage, amid the hubbub of a Bolivian street market, women recount their stories of abuse at the hands of men.

But the violence depicted in the play isn’t just make-believe for the 22 indigenous actresses: It’s based on their own real-life experiences.

“Kusisita,” a work that seeks to raise awareness about violence against women and mobilize people to fight it, has been drawing large audiences in Bolivia, which has one of South America’s highest rates of femicides.

In the theater, Maria Luque portrays a woman who asks her drunken husband to stop abusing her. In her own history, she said, she was so brutally beaten by the father of her four children that she was left partly paralyzed. Even after more than a decade, she still has trouble moving some of the muscles in her face.

“I’ve suffered discrimination since birth,” she told The Associated Press. “My mom was very poor and she escaped violence. For some, (violence) might be normal, but we want to show that it shouldn’t be that way.”

“Kusisita” is one of two plays offered by the Kory Warmis – Women of Gold in the Aymara language – troupe, and both focus on the problems of gender violence and convincing women to reject it.

“I was quiet, submissive, but I left that behind on stage. Theater is now my life,” said Luque, 56, who immigrated to the city of El Alto from a rural community in search of work opportunities.

The plays, presented in Aymara, are also aimed at indigenous communities where nearly half of all reports of gender-based violence take place, according to 2017 figures from the National Statistics Institute. Those communities make up roughly a fifth of Bolivia’s population.

About 40% of the country’s police cases involve family violence and alcohol is involved in 90% of cases, according to a government report last year on gender-based violence.

Actress Gumercinda Mamani, an artisan and shepherd, recalled how the body of a friend was found on the outskirts of La Paz with marks from a rope that her partner had used to choke her.

“It’s hard to understand how the man that you give your life to is the one who takes it away,” said Mamani, a former representative for female farmers. “I’m fighting against this.”

Carmen Aranibar, another actress, joined the group in the hopes that her story would encourage other women to leave abusive relationships.

“We can’t wait until they kill us or we want to take our own lives out of the desperation caused by violence,” said Aranibar, a mother of two boys who sells diapers for a living.

She said she endured beatings by her partner for more than 10 years before finding out that he was cheating on her with a younger woman.

“I nearly killed myself,” she said. “I put up with everything he did because I was afraid that he’d leave me. But then I realized that it wasn’t worth it and I left him. I’m happy here and that’s what I tell in the play.”

The theater group, which was founded in 2014, finds itself gaining an audience as waves of women mobilize to fight gender violence across the world. In neighboring Argentina, a grassroots movement known as “Ni Una Menos,” or Not One Less, emerged in 2015 and drew thousands to hold massive demonstrations in support of women’s rights. But while movements in Bolivia have lacked the impact of Ni Una Menos or the #MeToo movement in the United States, some say the plays have had impact.

Theater group director Erika Andia said it’s challenging to oversee a group of women who have been forced to be silent and submissive. But she said that their strength of will helped them achieve their goal of “discovering what they’re capable of, helping them loosen up and boost their confidence.”

“We never thought we’d reach so far,” Andia said. “There are no limits to what we do. Every year we continue to grow and there’s happiness after all the pain that our actresses have suffered.” /kga