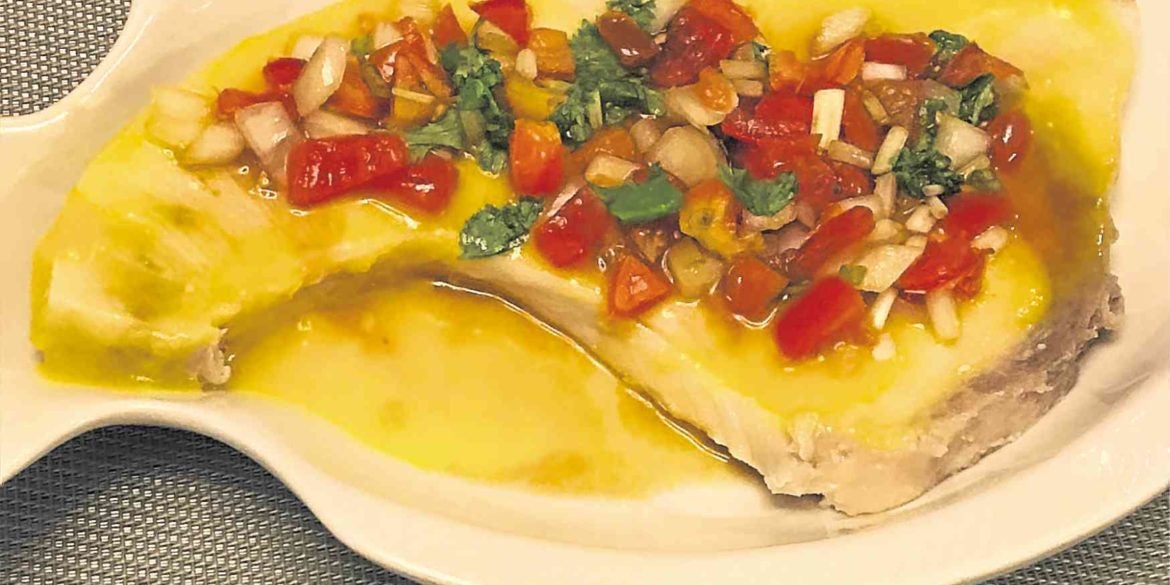 When I was editor of Food Magazine, we came up with a cookbook that compiled all the best recipes that had been published in the magazine since its start in 1995.

“The Best of Food Magazine,” first published in 2001, had 180 recipes of Filipino and international dishes, and it quickly sold out on its first printing… and on its second, and on its third.

As they say, the proof of the pudding is in the eating—and judging from the readers’ reaction, the pudding in this case was very well worth the eating.

Unfortunately that cookbook is now out of print. Those who were lucky enough to have bought a copy now guard theirs with loving care.

I myself have two copies of the book at home—one in the kitchen and one in my home office. The kitchen copy now has some of its pages splattered with a little oil here and a little sauce there. It has seen us through so many family meals, and each time I cook from it, the result is always a delectable dish.

One of my favorites in the book is the recipe contributed by former Miss Universe (and fellow Baguio Theresian) Margie Moran-Floirendo: steamed fillet of white marlin with mango-ginger sauce. The mango sauce imparts a tangy flavor to the fish, while the topping of tomatoes and onions enhances it further.

Over the years I’ve made a few adjustments to the recipe to suit my family’s taste. I’ve added cucumbers, spring onions and wansuy leaves to the topping, for instance, as well as white sugar to balance the acidity of the vinegar and the saltiness of the soy sauce. I also use blue marlin belly, but fillets of white lapu-lapu will also do.

For the blue marlin:
Wash blue marlin slices well then pat dry with paper towels. In a small bowl, blend together the ginger juice and calamansi or dayap juice.
Season the fish with salt and pepper then marinate in the ginger juice mixture for 10-15 minutes.
Steam the fish over moderate heat for 10-15 minutes or until fully cooked. Meanwhile, prepare the mango sauce and the tomato-onion topping.

For the mango sauce:
In a blender, combine the mango cubes, ginger juice, dayap or calamansi juice and pineapple juice. Season with salt and pepper. Process until the mango cubes liquefy and mixture is well combined.
Transfer the mixture to a saucepan and simmer for about five minutes, stirring occasionally. Set aside.

For the tomato onion topping:
In a large bowl, combine the tomatoes, onions, cucumbers, green onions and wansuy leaves. In a separate bowl, mix together the sugar, ginger juice, dayap or calamansi juice, vinegar and soy sauce. Pour over the tomato mixture. Season to taste with salt and pepper. Mix well.

Tips:
To make ginger juice: Grate about three inches of peeled ginger, using a box grater or a cheese grater. Put the grated ginger into a bowl and add about one-half cup water. Press the grated ginger to extract the juice. Strain the liquid into a clean bowl and use as needed.
For best results, use fish that’s very fresh.
For the tomato onion topping, you may add as much as you like of the tomatoes, onions, cucumbers, spring onions and wansuy leaves.