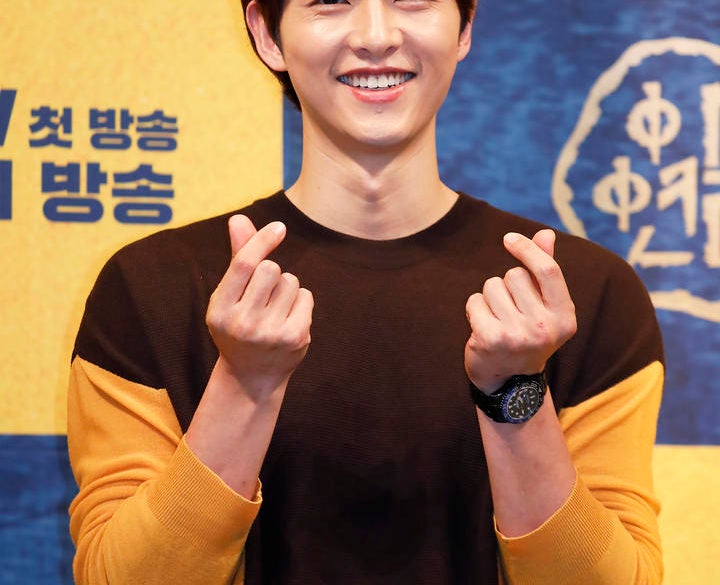 Song Joong-ki poses for the pictures during the Arthdal Chronicles press conference at Imperial Palace Seoul. Photo from Netflix

Kikyo is the couple name fans gave to them. Alternatively, they are also the Song-Song couple. Rumors of their divorce have spread early this year.  But Joong-ki puts it to rest by answering a question from a Korean reporter. The reporter asked if anything changed after the wedding.

“I personally don’t think a lot has changed for me after being married. But I have a more contented heart. That is something that could be different. I think anyone who has been married can understand where I am coming from,” he said.

The couple’s love bloomed on the set of “Descendants of the Sun” (2016). The Korean drama “Arthdal Chronicles” is Joong-ki’s first drama since “Descendants”. In the presscon held at the Imperial Palace Hotel, he said that his wife gave him the support he needed to do this drama. .

“My wife is a huge fan of the director and writers. Because this is the drama that I am coming back with after three or four years, she has been a constant cheerleader for me,” Joong-ki said.

The director of “Arthdal Chronicles” is Kim Won-seok who Joong-ki worked with in “Sungkyunkwan Scandal” (2010). He has also worked previously with writers Kim Young-hyun and Park Sang-yeon for “Deep-rooted Tree” (2011). Both dramas are historical dramas.

Joong-ki received offers before the “Arthdal Chronicles”. He famously declined the role of the Crown Pince in the Netflix Original “Kingdom”. The role subsequently went to another talented actor Ju Ji-hoon who owned the role in the show.

“I wouldn’t say that I chose this project over many other offers. But when I think about it now, when the writers and the director called me before the script was ready, I decided then to do this project,” he said.

“Arthdal Chronicles” starts streaming on Netflix on June 1 every Saturday and Sunday, 10:30 pm, one hour after the Korean broadcast.