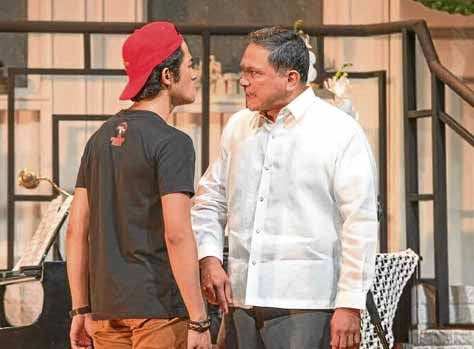 Eleven o’clock numbers (the theater term for a show-stopping song) apply only to musical theater, but the penultimate scene in Floy Quintos’ “The Kundiman Party” now feels like one.

In that scene, the dishonorable senator Juancho Valderrama finally comes face-to-face with his estranged son, Bobby, who has taken the opposite path as a voice of the resistance movement.

That scene was already dramatically satisfying during the play’s premiere at the University of the Philippines-Diliman last year, with Kalil Almonte as Bobby going against an appropriately slimy Teroy Guzman—the rebel standing up to the ruler.

This time, Nonie Buencamino plays the senator, and Boo Gabunada is Bobby—and what they bring to the show is an electric, more familial dynamic.

Gabunada’s Bobby is angrier, louder, more kinetic—a child prematurely molded by the harsh streets to become the fighter that he is. Beneath that façade of the woke millennial is a boy who learned to survive on his own. It’s a character arc conveyed so convincingly, that by the time Buencamino enters the fray, all of Bobby’s strident aggression makes perfect sense.

What surprisingly surfaces is a long-dormant father-and-son relationship.

Buencamino’s senator somehow reveals a caring parent underneath that veneer of calculated evil. And yet, his performance is made all the more delectable by its ambiguity: Is he really a caring father more than he is a politician, or is he just being a politician and fooling us all?

It’s astonishing how that singular scene is steered by what the characters leave largely unspoken—the years of absence and repressed hurt finally taking control of the situation.

When Buencamino’s senator tells his son to go to the mountains because that’s where the real battle is—even though “I may lose you, anak”—you know that Gabunada’s Bobby might very well do just that, if only to perform the ultimate act of rebellion.

And then it dawns on you that somehow, Bobby is now all of us—the ones who hoped for a tide of genuine change in the recently concluded midterm elections, and saw that hope annihilated; the ones who have carved their own corner in social media, helping fight the noble fight, and still got duped by the powers-that-be.

Last year, “The Kundiman Party” came across as self-reflection for the nation, asking, as reviewer Arturo Hilado wrote for this paper, “Fight or flight? Struggle or acquiescence?”

Now, three years into the Duterte administration and with the return to the Senate of some of the biggest thieves, those questions no longer await our individual answers so much as demand them.

The rest of the company are still in topflight form. Shamaine Centenera-Buencamino’s portrait of the songstress Adela, in whose home the story unfolds, remains a masterful creation of the stage; her accent alone, littered with subtle hints of one who feels alien to both Filipino and foreign tongues, works wonders in the storytelling.

But when the senator proclaims to Adela that “we are building a new nation,” it’s hard not to feel the make-believe giving way to reality. This time around, “The Kundiman Party” isn’t just telling us to “resist” from the comforts of our echo chambers; it’s already imploring us to keep fighting the good fight despite the miserable odds. —CONTRIBUTED

“The Kundiman Party” has four more performances: today and tomorrow at 3 p.m. and 8 p.m. at Peta Theater Center, Quezon City.

ticket2me.net or Facebook “The Kundiman Party at the PETA Theater”