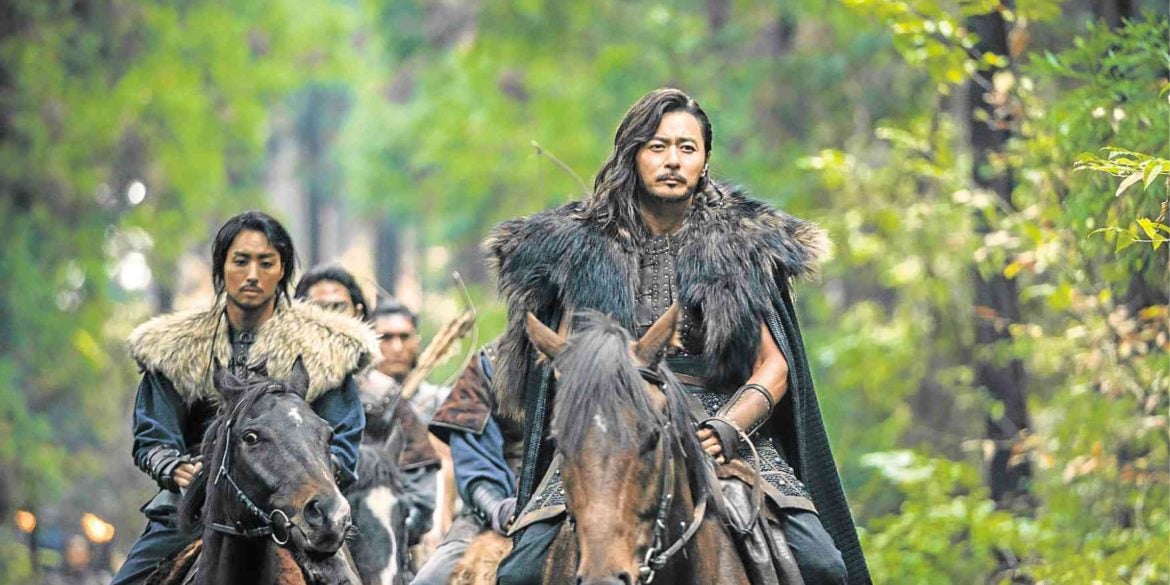 Enter the fantasy of the ‘Arthdal Chornicles’

Let us name a few places that we desperately want to visit but do not exist on our world map. They are Narnia, Middle-earth, Hogwarts, Westeros and possibly soon, Arthdal.

Arthdal is the fantasy setting of the Netflix Original series “Arthdal Chronicles.” It is directed by Kim Won-seok and created from the imagination of writers Kim Young-hyun and Park Sang-yeon. They wrote the historical dramas “Queen Seondeok” (2009), “Deep Rooted Tree” (2011) and “Six Flying Dragons” (2015).

But it is the characters who will breathe life into Arthdal. The story revolves around the lives of Eunseom (Song Joong-ki), Tagon (Jang Dong-gun), Tanya (Kim Ji-won) and Taealha (Kim Ok-vin).

Eunseom is half-human, half-Neanderthal member of the Wahan Tribe. To play this role, there are a few challenges that Joong-ki had to overcome.

“My character is almost half-naked because the Wahan tribe is from a region with a hot climate, and we wanted to give the character a primal look. I initially started out wearing a top, but running made me look like I might as well be topless. I found that primal look very refreshing, which is a major quality that made me decide to join this project. I loved embracing that look,” said Joong-ki.

He also said that there were scenes that it got very cold that he thought he was going to freeze.

“But of course, the outcome is so amazing and beautiful that I forgot all about the freezing cold. Postproduction, of course, added some nice visuals to the scenes. But many of the horse-riding scenes had such great natural light and looked amazing even before the special effects. Those simply made me forget about all the challenges we faced,” Joong-ki also said.

“Arthdal Chronicles” is a story about the birth of a civilization of a nation. It is based on the Gojoseon period (roughly the Bronze Age of Earth). Because there are few materials on the Gojoseon, they created a world of their own. For example, the word Arthdal is based on the word “Earth.” The writers also said that the original meaning of the word “Dal” in Korean is earth, a field or plains.

Imagining and acting in an unknown world is the biggest challenge posed to the actors. But the writers helped them out with that by drawing a map of the world their characters moved in.

“The writers built a robust world. For example, all the regions that appear in the story were already marked on a map. The terms used in the series may sound a bit complicated at first. All the new terms may feel a little overwhelming, but once you finish episode 1 and 2 and become more used to the ideas, it’s not going to be difficult to follow the story. Once you get familiar with the characters, races, and tribes in the series, you’ll see how engaging these characters are,” said actor Jang Dong-gun.

Kim Ji-won had also had to imagine what it’s like to live in ancient times. She had to imagine the life her character Tanya led. Tanya belongs to the matriarchal Wahan Tribe. She is in training to become its next leader.

“When I studied my character, I thought to myself, ‘People who survived this era must be people who survived attacks by wild animals, which means that each of these individuals must have their own set of skills for survival. They must be stronger than the modern-day people,’” she said.

For fellow actress Kim Ok-vin, working on this project is something that inspired her because it needed the actor’s use of the imagination.

“Every tribe has its own style in architecture and clothing and some even speak different languages in the story. We even have newly created languages in the series that sound like they could’ve been what people used to speak. The same goes for tools and garments. Seeing such products of imagination on set is really inspiring, which often helped me act when we filmed the series,” said Ok-vin.

The “Arthdal Chronicles” was divided into three parts. Writer Young-hun explained it is because there are three major points in the story. The audience will understand why they needed to separate once they start watching the drama. The other parts of the series will be shown later this year.

New episodes of “Arthdal Chronicles” will start streaming on Netflix every Saturday and Sunday, 10:30 p.m.