How ecotherapy, or reconnecting with nature, can combat stress, anxiety and depression | Inquirer Lifestyle ❮ ❯ 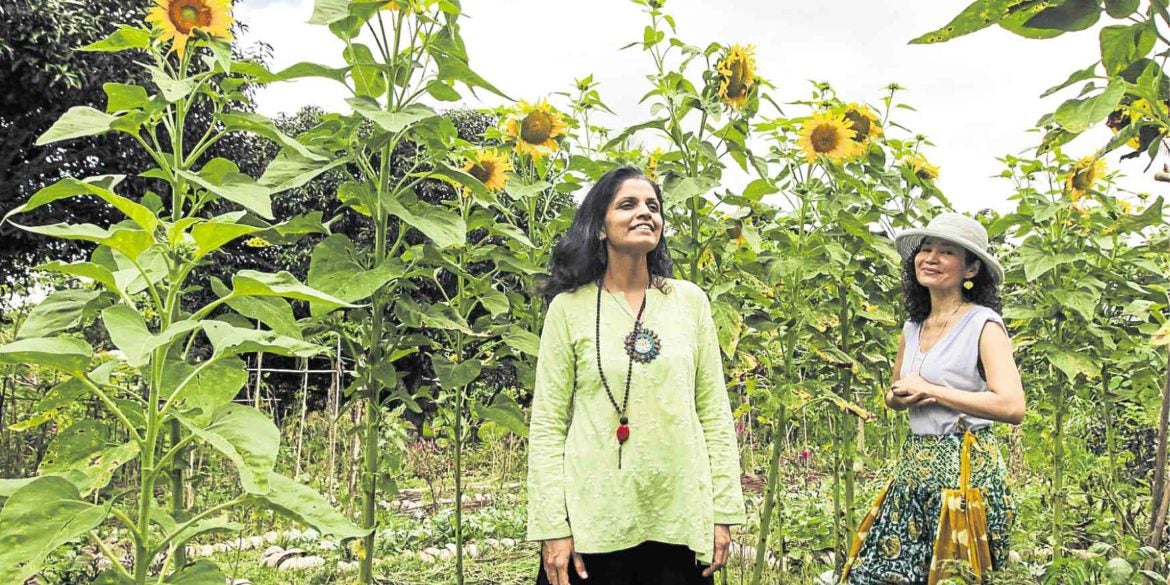 How ecotherapy, or reconnecting with nature, can combat stress, anxiety and depression

That’s how far ahead Delgado’s team is thinking. Kai is an acronym of her siblings’ (not her children’s) names, to remind her that they are no more than stewards of the land for many generations to come. Kai Farms, owned by conglomerate Transnational Diversified Group (TDG), is anchored on the principles of permaculture.

Permaculture is a set of creative design processes based on whole-systems thinking that simulates and/or utilizes the patterns and resilient features observed in natural ecosystems. It adopts the ethics and patterns of relationships in nature.

Kai Farms, however, is more than just avoiding pesticides and upsetting the earth’s natural cycles. Delgado has a higher purpose. She aims to make organic food more accessible to everyone, not just a commodity exclusive to the wealthy, and her farm open to people from all walks of life.

At present, she’s busy reconnecting the communities surrounding the property to the ecology that sustains them, and teaching anyone interested how to grow their own food.

Forest bathing is a Japanese practice called shinrin-yoku (shinrin means “forest,” and yoku, “bath”) where one bathes in the forest atmosphere.

Delgado says she also wants to give people a chance to walk in nature, to bathe in the energy of nature. Get to know the heritage of the land, she says, and its wild plants, medicinal plants, trees, and wildlife.

“People live and work in glass boxes. We shop and eat in malls. We are so disconnected from nature, from the sacred in life. Kai Farms is about reconnecting people to the sacred and to our essence, especially women. Women are sacred beings, we bring people to life,” says Delgado.

According to Harvard Health, the media and publishing division of the Harvard Medical School of Harvard University, an expanding body of scientific evidence suggests that nature-deficit disorder contributes to a diminished use of the senses, attention difficulties, conditions of obesity, and higher rates of emotional and physical illnesses.

The report says that research in a growing scientific field called ecotherapy has shown a strong connection between time spent in nature and reduced stress, anxiety, and depression. (Nature-deficit disorder is a term coined by Richard Louv in a 2005 book, “Last Child in the Woods.”)

“We begin with a nature walk, and we invite the visitors to pick up something they find along the way, something that they want to feel in themselves or in their life,” Delgado says. “A visitor once picked up a chili pepper, ‘I’m always angry, and I want to heal that.’”

The retreats, while they’re not offered for overnight stays yet, are very authentic, she says. Kai Farms has a natural spring with potable water, healthy farm-to-table nutrient-rich meals. There are meditation sessions as a way for people to reconnect with their higher self.

Work partner and Kai Farms general manager Amena Anantishi Bal leads the meditation sessions: “Meditation is something you experience. A meditative mind is a mind that is present in the now—there are no past regrets or future plans. Everything in nature is so alive that you are forced to be in the now.”

Permaculture heals the land and makes it healthy and alive as well, says Delgado. Organic, she points out, simply means growing chemical-free products. But with permaculture, the farm is using inputs from its natural surroundings to feed the soil. Even the seeds Kai Farms use is not treated with a fungicide. (Some organic farms use treated seeds, she says.)

This means Kai Farms produce is far superior in terms of nutrients and taste compared to other products in the market. “You can tell the difference. My kids always say to me, ‘Mom, you turned us into salad snobs,’” Delgado says.

Kai Farms will host again the Green Unconference that intends to engage the community to discover new opportunities, techniques, and innovations for easy sustainable living. There will be workshops (including a healing workshop) and talks, music, theater, games, and a mindful market on June 3-8 at TDG In.Hub in Taguig, and June 9 at Kai Farms in Silang, Cavite.

The Green Unconference is championed by TDG with Kai Farms.