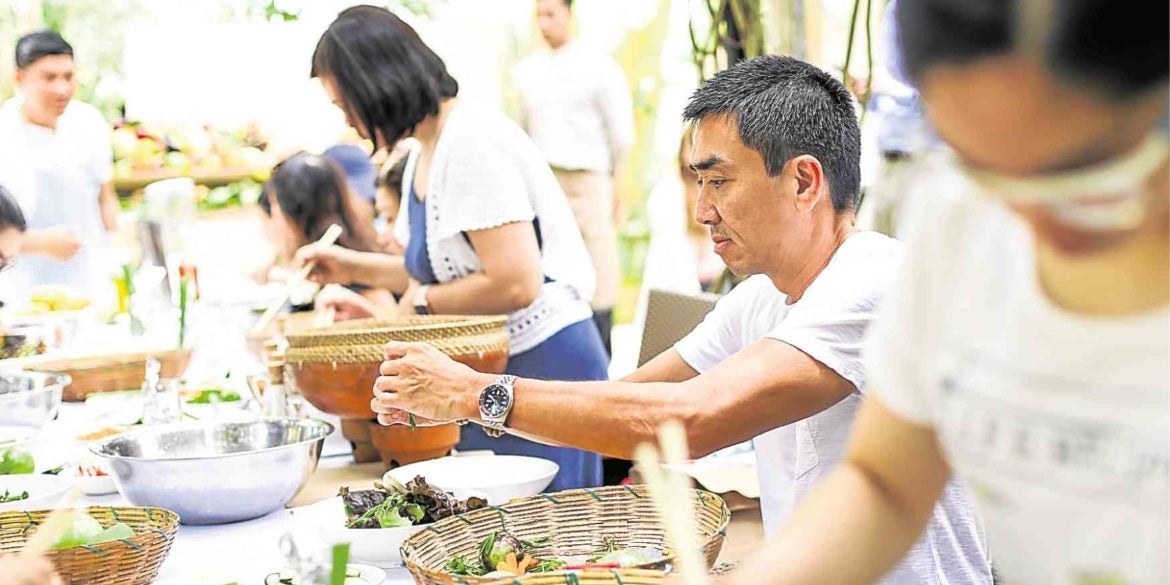 Participants learn to cultivate and prepare food with love.

Stress is a choice, according to facilitators of mindfulness retreats.

Anya Resorts’ “Inner Journeys Experience” is a series of workshops that invites participants to make a detour from the fast lane and take a slower route that leads to a calmer outlook.

For two decades De Ocampo had juggled family life with careers in publishing, real estate and banking. Weary of the pressures, she started organizing workshops that made people realize the connection between the body and the mind, and how their perfect balance could brighten their world.

Her workshops are based on the concept of “mindfulness,” a buzzword which means focusing the mind on a single activity, object or idea instead of on several at a time.

“Mindfulness helps us to slow down and learn to relax,” De Ocampo said.

The session began with growing organic food and making smoothies and dressings. Entrepreneurs Mario and Olive Medina named their farm, Lorenzo’s Sanctuary, after their eldest son, who is autistic.

Olive says Lorenzo, 17, used to be shy. Today he smiles and is more sociable when he is in touch with the earth. The Medinas said they’ve never been sick ever since they adopted the natural lifestyle.

They plucked herbs and fruits from Anya’s garden for their salad lunch. The herb garden was a haven for visitors as they got to know what they were eating by learning the plants’ names and their attributes.

When they became fully absorbed in the activity, they realized that there was no need to rush—a daily habit in the city. They found peace even the smallest things like the calming blue shade of butterfly pea flowers.

The greens were flavored with dressings made from coco nectar, olive oil, Bragg’s amino acids, and passion fruit from the garden. Senses were reawakened with Sekaya botanic infusions (not to be confused with teas which are defined as caffeinated leaves). These herbal concoctions addressed various concerns such as weight loss, digestive disorders, sleeplessness, metabolism and moodiness.

Sekaya consultant Judy Abrina explained that botanicals have been valued for their mystical and healing qualities. For instance, chamomile can be used to reduce inflammation while a solar plant can attract prosperity.

She added that the right plants can be a partner to the individual, as its healing properties can bring the mind and body into equilibrium.

During the break time, guests savored the beauty of Anya’s landscape. Its contours, colors, textures, scents, chirping of the birds and rustling of the leaves worked as a soothing balm.

To mobilize the joints and stimulate blood circulation, De Ocampo taught bamboo wand workout, a set of 17 gentle exercises which helps the body move in different directions and lengthens the spine. De Ocampo said her regular practice has improved her scoliosis and her flexibility.

The day ended with music and a meditation commentary. Anya’s garden lent itself to introspection with canopies of trees and quiet corners. Gazing at the blazing sunset in Tagaytay and enjoying the silhouette of foliage, the guests felt some magic as their worries faded.

“At Anya, we believe in working out the physical and cultivate spiritual but not from the viewpoint of any religion. It’s making time to turn inward and know yourself better,” said Mikel Arriet, Anya Resort’s general manager. —CONTRIBUTED