Trent: In the footsteps of the princes of the church | Lifestyle.INQ ❮ ❯ 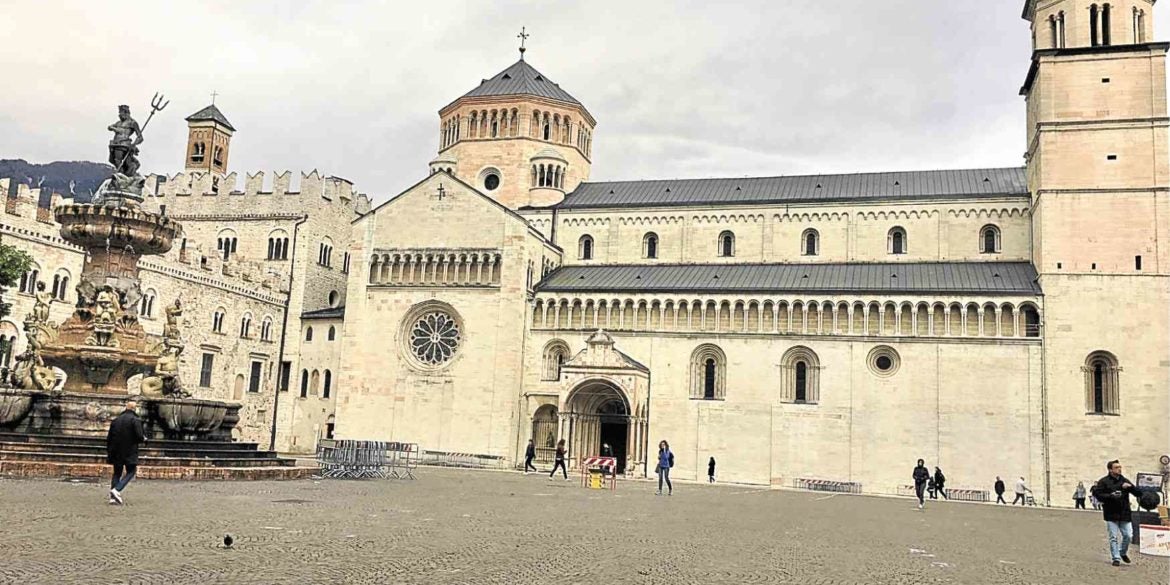 Trent: In the footsteps of the princes of the church

Last election day in the Philippines was a red-letter day for me, as well, in northern Italy, which I spent with friends in a noble medieval city called Trent.

Guiseppe and Franca Parolari, parents of my doctor friend Luca, planned to take me and my travel mates, Brigs and Honey Carandang, to dinner. The chef of the restaurant is Luca’s cousin, Federico.

We were told that the restaurant, Osteria a Le Due Spade (Restaurant of Two Swords), was famous in the region for its menu of game, especially deer, for which it earned a Michelin star.

Our excitement was heightened when Luca’s father told us the restaurant had been in continuous operation since 1545, when the Council of Trent was convened in this medieval city.

We were told that during those times, the archbishops, bishops and other important personages of the Catholic Church would retreat to Due Spade for their meals of game and fish.

I got gooseflesh upon realizing we were dining in the same hall where crucial changes in Church history took place nearly four centuries ago, and we were going to partake of venison and truffle from the forests around Trent, the same fare the participants of the Concilium Tridentinum consumed.

The name of the restaurant gave full meaning to what happened in this medieval town— the two swords: the sword of the Catholic Church parrying the sword of Protestantism.

The term “Council of Trent” was used loosely in my time as chief medical officer of St. Luke’s, when the CEO would call his close-in group for a meeting when a group of doctors was plotting some scheme counter to the policies in place.

In the 1500s, there was a growing discontent with the tenets of the Catholic Church. In response, the Council of Lateran was convened, when reforms regarding the selection of bishops, taxation and preaching were issued. The Catholics of Germany, especially, were not satisfied, because this did not address their major concerns.

There was a growing restlessness among the flock, and the reformist Martin Luther published his 75 theses in Wittenburg in 1517, among them the abolition of the papacy.

Luther and his teachings embodied the soul of the Reformation, and these drove many Catholics away from the Church. Europeans who were his followers stopped going to church, and embraced Protestantism.

Pope Paul III convened the Council of Trent (Concilium Tridentinium) in 1545, to declare the proponents of Protestantism as heresies and to regain the foothold that was lost by the Church to the teachings of Luther. This was the start of the Counter-Reformation.

It all happened here in Trent, and the princes of the Catholic Church gathered in the Duomo of Santa Maria Maggiore. In its shadow a few meters away was the restaurant where we were going to have dinner.

When the cathedral bells started to fill the air with its sonorous cadence, I paused to feel the gravitas that the city of Trent conjured.

I learned that the council was convened 25 times in a span of two decades, from 1545 to 1563, and was presided over by three popes—Pope Paul III, Pope Julius III and Pope Pius IV—none of whom attended the council in person.

The council issued condemnation of what it defined to be heresies committed by the proponents of Protestantism, as well as statements and clarification of Church doctrines. They also defined the Mass and upheld the veneration of saints.

In 1565, after the council finished its work, Pope Pius IV issued the Roman Catechism and revision of the breviary and the missal. These in turn led to the codification of the Tridentine Mass, which remained the Catholic Church’s primary form of the Mass for the next 400 years.

Trent is under the radar for many travelers, who prefer visits to nearby Verona, for the graffiti-covered balcony where Juliet was supposed to have been courted by Romeo.

On this beautiful spring day in Trent, there were not too many people. A lone artist was playing a plaintive Monteverdi on his violin in the expansive plaza dominated by an ornate fountain, presided over by a gray Neptune surrounded by angels in impossible poses.

I did not see any Asian tourists, unlike in Milan where hordes crowded the shops in the Galleria Emanuelle or Via Montenapoleone, or stood shoulder to shoulder in the vaporettos of the Grand Canal in Venice.

On the day we visited Trent, the city was populated by university students hurrying on their bikes, or walking briskly in pairs or huddled in cafes near the Duomo in their spring sweaters in the cold wind. It is an old city taken over by the young.

I saw a few elderly Italians inside the Duomo of Santa Maria Maggiore, celebrating the 40th anniversary of a bishop sitting on a throne beside an ornate altar, where there was much clapping reverberating in the magnificent hall.

I walked slowly on marbled floors leading to numerous side altars dedicated to ancient saints, whose gloomy faces were pierced by shafts of light from hundreds of lighted candles.

Amid a slight drizzle, Guiseppe and I walked around the historic center, navigating the charming passageways in the fading day, brightened still by the profusion of flowers hanging from stilts of faded brass. I got attracted to a capilla with a heavily sculpted wooden door; in front of the altar, a group of young men quietly prepared for a late evening concert.

Along the street leading to the Duomo were many palaces with walls adorned with painted curlicues of vines, or an occasional crown of laurel, or peeling images of saints and bishops, or heavy-breasted medieval maidens now fading, but still resplendent. I peered at the inscriptions embossed on the walls, indicating the names of the bishops and other princes of the church in residence in these splendid palaces during the Tridentium.

Every time I travel, I seek out a memento of a place that I put on my bedroom wall to trigger memories. I wanted a print of the Concillium Tridentinium, whose impact in society can be felt to this day. The issues that were debated centuries ago are alive in our beloved archipelago, far away from Santa Maria Maggiore.

Unfortunately, for me, the last print in the antique shop had been bought by a bishop the day before our visit. The gentle shopkeeper promised to notify me when a copy is available. For now, I am content with a map of Trent circa 1700. It will be placed beside an ancient map of Bologna, which my doctor friend gave me as a gift one Christmas.—CONTRIBUTED