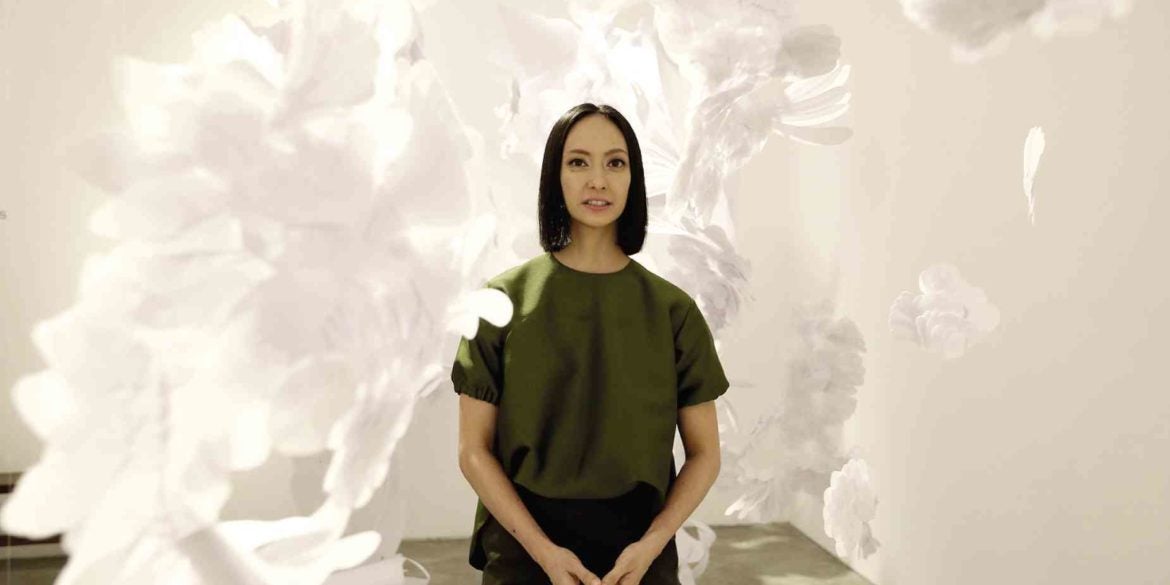 Bea Valdes: “Wewanted to create an experience that you could walk through.”

The designer uses her toiles, basic prototypes of her finished products, to create ethereal, detailed installations highlighting ‘something you don’t normally expose’

Designer Bea Valdes harnesses the power of the appliqué for brave artistic expression.

Valdes earned her reputation for the intricate embroidery and beadwork of her namesake brand of clutches, jewelry and decorative panels. Her ongoing exhibit, titled “Flux,” shows how a toile—a study of the finished installation or bag made of inexpensive fabric—can be elevated in an artistic environment that stirs emotions as one walks through it.

Inspired by the amorphous patterns used in her large-scale, commissioned panels, she cut hundreds of abstract petals and feathers in white felt, stitched and layered them, and suspended them along a light-filled corridor and a corner at Silverlens Gallery.

The installations resemble a series of abstract angels or giant birds in flight. When the light falls on the works, the shadows cast on the wall become part of the art. The all-white site installation evokes imagery of angels or swirling clouds.

“It’s about flight or weightlessness,” she says. “We’ve been doing large-scale commissions, but in presentations, we can’t do full-size mockups, so we show the detail work. Middle of last year, we found some of the old patterns and strung them up. Like carcasses, they were resurrected in the workshop.”

These toiles were always starting points for her designs to be tested and perfected. Although some were disheveled or timeworn, they still held meaning for Valdes because their design intention was clear.

She then conceived of creating installations that showed how the Bea Valdes brand began its design process with the felt toile. “When we start our bags, we use a material to draw on. This is like pattern paper. It is something you don’t normally expose,” she says.

Up close, the felt pieces are cut with precision, with no need to sew or finish the edges. Behind the installations are the stitches that lend character to the work. The whiteness of the felt elicits feelings of calmness and purity. The installations take on different moods as the light changes in the gallery throughout the day.

Two installations along the hallway are framed by a glass wall. The glass doubles the illusion of the artwork. You want to touch the installation, but realize it’s just a reflection. “We wanted it to be like a place you couldn’t name,” she says—perhaps, something you couldn’t quite put a finger on. “It’s something that cannot be quantified in the same way as matter.”

“Flux” could be interpreted as how the starting point of a design process can also be the finished product. The artist’s concept makes you rethink time. “It’s about beginnings and endings,” Valdes says. “They inhabit the same space. Time is not linear.”

The works look deceptively fragile, but felt is resilient. This material doesn’t fray and can withstand all sorts of weather conditions.

Known for fastidious work, Valdes, with her workforce, took several months to cut the ellipses, petals and wings and stitch them together. When they were hung in the gallery, Valdes fine-tuned the installations by trimming them so that they would look attractive and float in space.

Gallery owner Isa Lorenzo likens Valdes’ works to skeletons or sculptural bone work. “Something that is normally concealed is revealed,” Lorenzo says. “The amount of attention that Bea gave to detail was incredible. When she installed them at different heights, only she could tell the difference, if one had to be higher by 2 centimeters to the right, or by 1 cm. That’s the way she is.”

Valdes’ creativity is in demand these days. Aside from designing her Spring-Summer 2020 bag collection for the global market, she is working on a public art installation for the upcoming South East Asian Games. To mark the 30th anniversary of Premiere Classe, Paris Fashion Week’s trade show for high-end jewelry and footwear, the organizer selected her to create one accessory for a 30-piece international collection that celebrates this milestone. —CONTRIBUTED