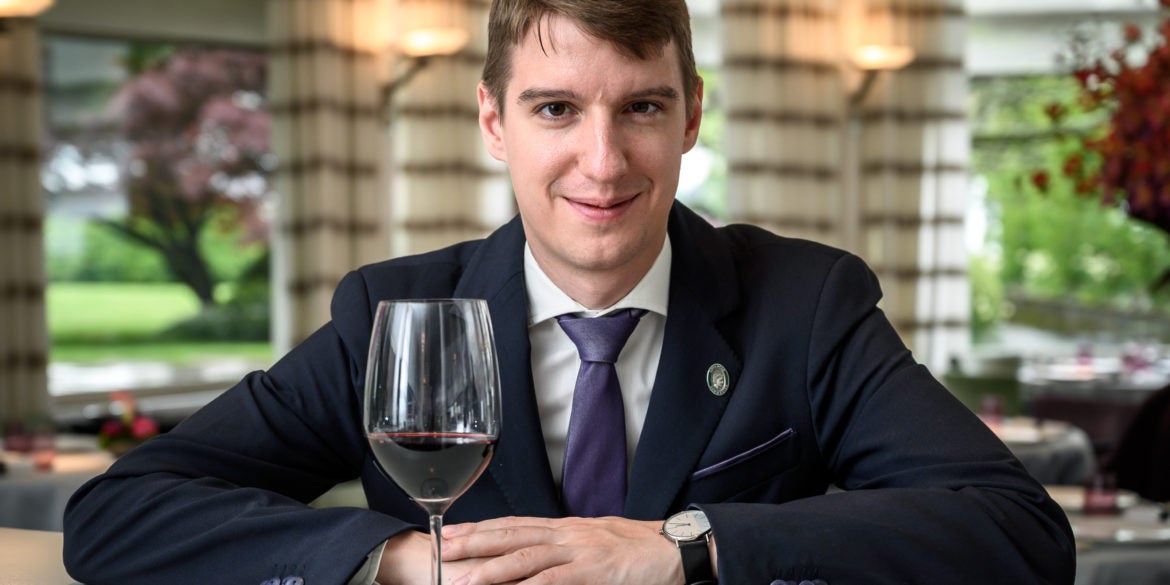 World's best sommelier, 27-year-old Marc Almert poses for a photo session with a glass of red wine on May 8, 2019 at the two-Michelin-starred Pavillon restaurant at the Baur au Lac hotel in Zurich. - In March 2019, Almert from Cologne won the title awarded by the Association de la Sommellerie Internationale (ASI) after a mutli-round competition involving national and regional qualifiers that tests knowledge, tasting and service of all beverages typically served in a restaurant. (Photo by Fabrice COFFRINI / AFP)

By: Ben Simon via Agence France-Presse

“Both (my parents) always tried to motivate me to taste the wines at home when I was coming of age — so 16, 17 — and I always refused,” said Almert, the slight, genteel sommelier at the two-Michelin-starred Pavillon restaurant in Zurich’s ultra-luxe Baur au Lac hotel.

“To me (wine) stank and it didn’t taste nice and I didn’t want to drink anything at the parties with school friends. People were having beer and spirits and I thought it was disgusting…That was my honest opinion,” he told AFP.

In March, the 27-year-old won the title awarded by the Association de la Sommellerie Internationale (ASI) after a multi-round competition involving national and regional qualifiers that tests knowledge, tasting and service of all beverages typically served in a restaurant.

The contest happens every three years, making Almert — from Cologne, Germany — the 16th winner in its five-decade history.

That he earned such an honour a decade after finding alcohol broadly repulsive is a testament to both Almert’s tenacious work ethic as well as shifts in an industry that is increasingly drawing younger talent.

In her book, she described the sommeliers she profiled as “the most masochistic hedonists (she’d) ever met,” with an all-consuming regime of tasting and studying that, in at least one case, appeared to destroy a marriage.

Almert did not immediately reveal any hedonistic traits, but he did make clear that becoming a world-class sommelier required unrelenting determination.

“There is no big secret about it. You just need to hit the books, do your flash cards, really, really learn and dig deep, and that just takes a lot of hours,” he said.

But winning the ASI title required more than encyclopedic knowledge of wines, spirits and beer.

Finalists also have to demonstrate graceful service skills in multiple scenarios, including one where a table declares its meal should only be paired with white wines — even if a dish seemingly cries out for a full-bodied red.

Almert said his school experience in improvisational theatre taught him how to cope “when your voice starts shaking.”

But he also mentioned another factor that helped him relax on stage during the finals in Antwerp.

“To me, it was clear I had no chance, because there were two great colleagues next to me, one of which was a very seasoned and very well trained sommelier…That was what made me so calm. I had no pressure.”

Bosker, whose book details the history of sommeliers, told AFP it was “an incredibly old profession” mentioned in the Bible but which, in more modern times, was hardly a prestigious position on the restaurant floor.

“There were times when sommeliers were failed chefs who were booted from the kitchen to the cellar,” she said.

But that is changing rapidly.

Bosker said that one of the most striking changes in the industry is that “more people are coming to it at a younger age than ever before.”

“People are really coming to the job of a sommelier as a career. It is not just a temporary stopover.”

She also noted that more women are breaking into an industry that has always been male-dominated, injecting it with even more new talent.

Indeed, the second place finisher at the world’s best contest was Nina Hojgaard Jensen of Denmark.

Almert dismissed the suggestion that the newly-crowned world’s best sommelier should be the main attraction at Pavillon.

“In America you do definitely see the sommeliers becoming almost like pop stars and almost being on the same level as the chefs,” he said.

“I think in Europe… the focus is still on the chef which I think is very good because chefs make the food.”

But he conceded in the weeks after he won the title some people booked tables at Pavillon because he “had managed to win a certain title.”

The Baur au Lac’s general manager, Wilhelm Luxem, told AFP that beyond employing an award-winner, high-end restaurants needed sommeliers that were both flexible and unpretentious.

“Sometimes a sommelier can come across very much like a professor and that is not at all (Marc’s) approach,” Luxem told AFP.

While some might perceive a sommelier as a stuffy wine buff whose goal is to nudge diners towards wildly expensive bottles, Luxem said that a growing tendency in the industry is a guest who wants to drink by the glass — but something nicer than “a house wine.”

Almert summarised his approach as an exercise in tactfully trying to figure out what a table is looking for — how much they want to spend and whether they are looking to experiment or drink something safe.

“All of this is fine,” he said. “It is just my job to phrase the questions.”