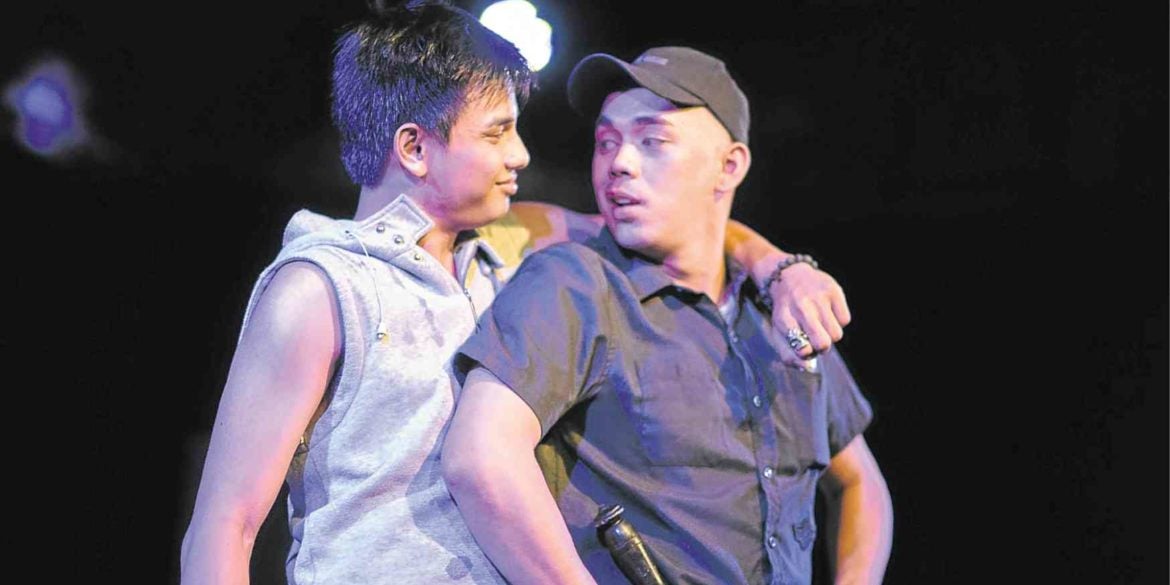 A game of sexual upmanship between the call boy (Andre Miguel) and the cop (Paul Jake Paule). --JAYPEE MARISTAZA

‘Laro’: A raw, gritty revelation on the complexity of gay relationships

Fifteen years after its first staging in Manila, Floy Quintos’ “Laro” has lost none of its justly earned bite, pathos and poignancy. The updated version, directed by John Mark Yap with fresh material added by Miguel Castro, makes references to call centers and virtual hookups.

Some of the characters even whip out their smart devices for some cyber sex (which was technologically unheard of a decade ago). But at the core of it all remains the dark, painful struggle of the gay community’s search for love, connection and acceptance.

Spoiler alert: Viewers are advised to leave their romantic, flowers-and-chocolate notions at the door. The script pulls no punches and rips open the longings and lust of the 10 characters who, two at a time, inhabit the stage for roughly 15-20 minutes each in a revolving tale that connects them all in a series of 10 vignettes.

The close quarters of the minimally lit theater can blur the traditional boundaries between actors and audience. Io Balanon’s stage design is practically bare, and props like chairs, couches and tables are brought in and out as one scene ends, and the next one begins.

The burden of making the audience empathize or at least feel the characters’ dilemmas then falls full force on the actors. The challenge for each thespian lies in peeling away layer by layer the brave front that his character shows to the world.

The first vignette might show his swagger, the succeeding and last one exposes his vulnerabilities. However, he has to connect them to present his character as a complex human being, while opening the door for the next character to come in and build on that thematic revelation.

For example, MC dela Cruz’s up-and-coming millennial manager is conflicted about his physical meetup with his chat lover, serial playboy Gio Gahol. The next scene shows why: Dela Cruz’s partner (whom he admits he has) is older, smarter, more successful and will do anything to protect their newfound respectability in a predominantly heterosexual high society.

Said partner, played by Al Gatmaitan, later shucks this sophisticated persona when he brazenly and unapologetically buys the sexual favors of a school basketball team. Gatmaitan’s young lover on the team, Ross Pesigan, has a crisis of conscience, which is revealed more fully in his next scene with his journalist cousin (Vincent Pajara).

The first act is all about power play, who gets to be top and who has to contend with being bottom, in more ways than one. The cry for love explodes in the second act, where the vignettes have the characters asking for more—more meaning, more care, more emotional depth—in what usually starts out as a physical relationship.

Some of the actors breathe more life into their characters than the others. Not surprisingly, the more experienced actors deliver the more granular performances like Paul Jake Paule’s sleazy cop and Vincent de Jesus’ billionaire.

The subtle coming-out of Pajara’s writer and the unexpected self-liberation of Phi Palmos’ drag queen also deserve special mention. As of this writing, many in the ensemble were still finding their paces.

Their commitment to playing out their roles is undeniable, mirroring their characters. At the end, they gather onstage in a red haze of passion, a testament to their continuous quest, unmindful of the pain that they might still go through. —CONTRIBUTED