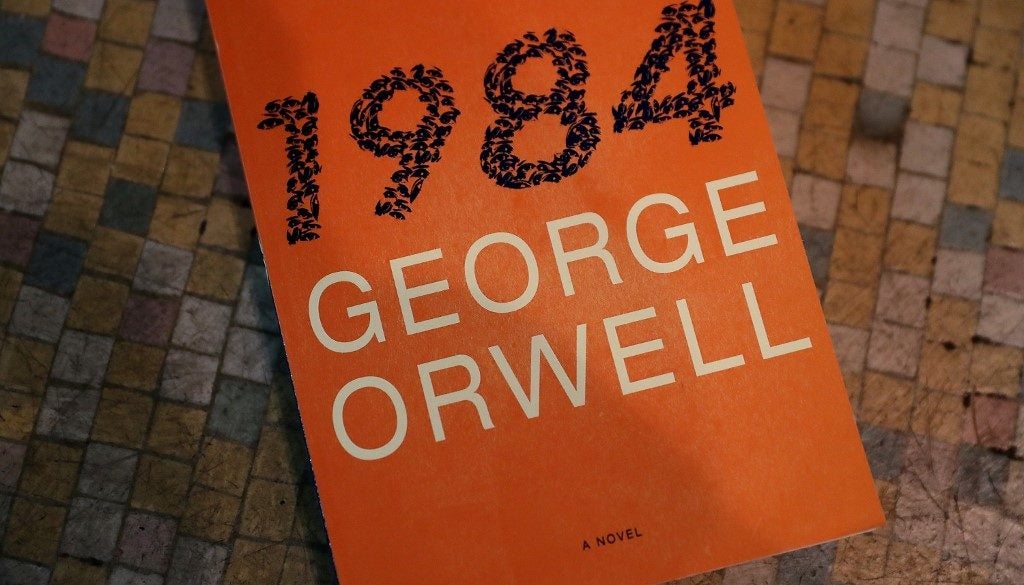 LOS ANGELES, CA - JANUARY 25: A copy of George Orwell's novel '1984' is displayed at The Last Bookstore on January 25, 2017 in Los Angeles, California. George Orwell's 68 year-old dystopian novel '1984' has surged to the top of Amazon.com's best seller list and its publisher Penguin has put in an order for 75,000 reprints. (Photo Illustration by Justin Sullivan/Getty Images)

Why Orwell’s classic ‘1984’ is still fresh in an angst-filled, social media-dominated age

“Some students are very shocked by it, and remain shocked by it,” said Michael Callanan, an English teacher and director of the Orwell Youth Prize, which supports political expression amongst young people.

“It is part of the paradox of a book being 70-years-old,” he added.

“I think they were taken aback by how fresh and how true to our lives today it strangely is.”

Written in 1948, and published the following year, “1984” depicted a chilling future world in which a totalitarian state controls people’s thoughts and actions, suppressing any dissent.

This rigidly-controlled society features a so-called “ministry of truth” that distorts reality, with the ever-watchful eyes of “Big Brother” keeping tabs on citizens’ behaviour.

The novel introduced other terms that have endured in the lexicon, including “double-think”, which means “the power of holding two contradictory beliefs in one’s mind simultaneously, and accepting both of them”, according to Orwell.

For Jean Seaton, director of the Orwell Foundation, which promotes the work of the writer who died in 1950 aged 46, and administers various awards, his masterpiece was “very prescient”.

She noted the book’s description of “two minutes hate” — in which citizens watch a daily film inciting them to hate enemies of the state — as comparable to online hate-mobs today.

Over the seven decades since its publication, “1984” has remained omnipresent on the social landscape, and even seen periodic spikes in sales.

In 2017 it enjoyed a boom in popularity after one of US President Donald Trump’s advisors used the term “alternative facts”, a phrase used in the book.

The novel also saw a marked increase in purchases in 2013, after the revelations of mass state spying by US whistleblower Edward Snowden.

Callanan, who has been teaching for 30 years, said today’s teenagers are not “frightened of it in a way that maybe previous generations were”.

“But in the past couple of years with the rise of Trump, there is now significant minorities of students that are very concerned about the way the world is going — and of course truth is the big thing,” he added.

Even those who have not read “1984” can be hard pressed to avoid its influence on popular culture, from movies and music through to video games.

When students open the book for the first time, Callanan said they “immediately recognise things like ‘double-think’ and the ‘thought police’.

“These kind of Orwell phrases are out there in the zeitgeist, and kids have heard of them,” the teacher at a school northwest of London added.

The book appears particularly relevant amid wider public interest in dystopian fiction and drama on television and in cinemas, with television hits like “The Handmaid’s Tale” and “Black Mirror” and film adaptations such as the “Hunger Games” series.

Callanan tells his pupils Orwell is “the granddaddy” of these contemporary works.

“People are reading it for signs of what they should be worried about now.”