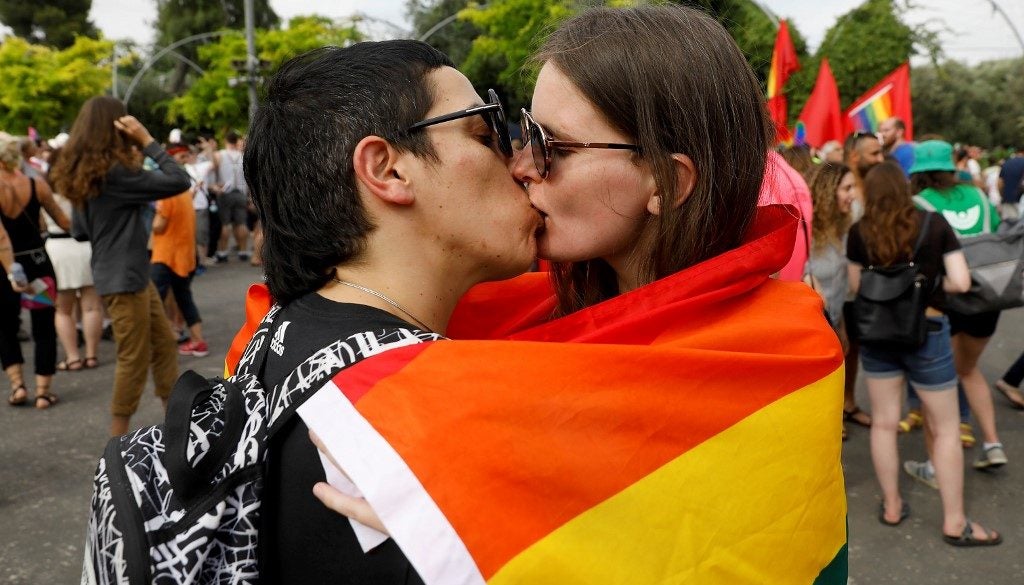 Two women kiss in a rainbow flag as participants take part in the 18th annual Jerusalem Gay Pride parade on June 06, 2019. - Thousands were expected to participate in Jerusalem's annual Gay Pride march Thursday under high security following a knife attack by a Jewish religious extremist that killed a teenager in 2015. Police were deploying some 2,500 undercover and uniformed officers for the parade that starts at a park in the Holy City and continues through nearby streets in the late afternoon and into the evening. (Photo by MENAHEM KAHANA / AFP)

Thousands took part in Jerusalem’s Gay Pride parade Thursday, waving rainbow flags and calling for tolerance in the Holy City under tight security following a 2015 knife attack by a Jewish extremist that killed a teenager.

As crowds gathered for the march, police said they had arrested a man in the area who was acting suspiciously and a search turned up a knife.

A total of 52 people were detained on suspicion of wanting to disrupt the event, police said without providing details.

Police deployed some 2,500 undercover and uniformed officers for the parade that started at a park in the Holy City and continued through nearby streets.

Crowds were festive, with live music and dancing before the march set off.

“Despite the difficulties, it’s important to participate, especially in Jerusalem,” said Israel Lumbroso, a 28-year-old resident of the city who said he came out of the closet around a year and a half ago.

This year marks the 18th Gay Pride march in Jerusalem, but due to the city’s conservative religious character, controversy and even violence have erupted at times.

The city hung rainbow flags along the march’s route despite Jerusalem chief rabbi Aryeh Stern requesting it not be done to “avoid hurting the feelings of part of the population”.

City hall has also ordered the removal of posters denouncing the march and reading “Father and Mother = Family. The courage to be normal.”

A 2015 knife attack that killed a 16-year-old girl and wounded several others remained fresh in the minds of many.

The attacker was Yishai Shlissel, an ultra-Orthodox Jew now serving a life sentence.

Shlissel had spent 10 years in jail after a similar attack on the 2005 Jerusalem Gay Pride march and had been released just three weeks before the event, leading to heavy criticism of the police.

The Jerusalem parade has taken on added significance since then, with many from outside the gay community joining the march in solidarity and to call for tolerance.

Illustrating the diversity of the crowd, a 25-year-old man with a Jewish skullcap and sidelocks said he was participating in solidarity.

“I want to show that religious people support those who are targets of a murder,” said Dov Morell, who had also brought along his baby in a stroller.

Israel has the most open attitude to homosexuality in the Middle East, with a large and influential gay community.

But conservative Jerusalem, which is sacred to Jews, Muslims and Christians, is far less gay-friendly than liberal Tel Aviv.

The march takes place only in mainly Jewish west Jerusalem and not in the city’s annexed eastern sector, which is claimed by the Palestinians as the capital of their future state.

But many analysts saw Amir Ohana’s appointment as justice minister months ahead of September 17 elections as strictly politically motivated since he has expressed support for a proposal that would result in Netanyahu being granted immunity from prosecution.

Netanyahu faces possible indictment for corruption in the months ahead.