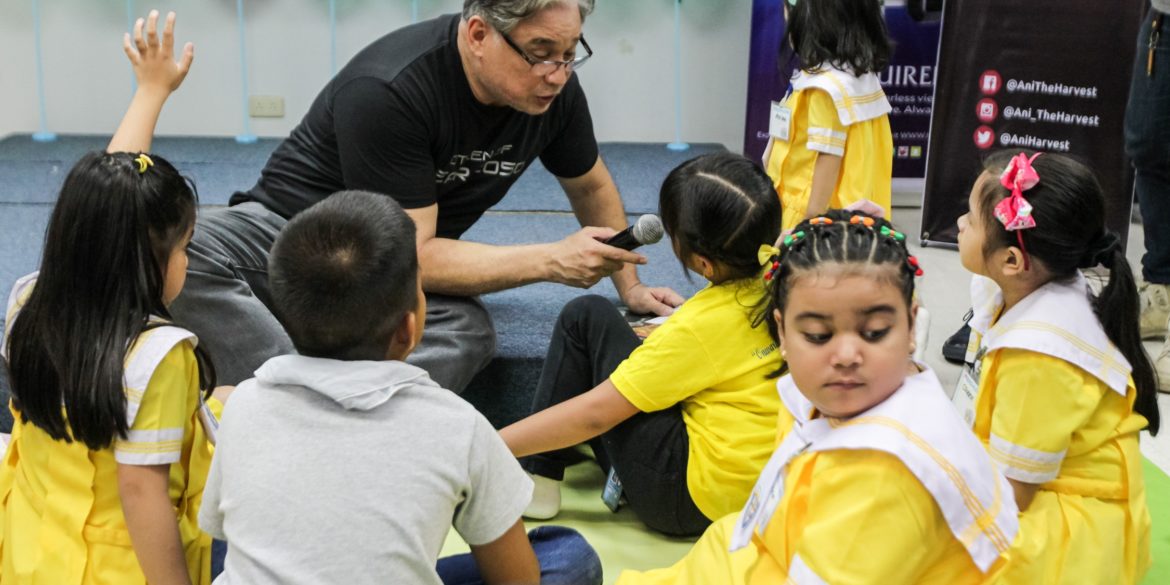 He said he used to read to his children when they were younger.

“In fact, even when they were still in their mother’s womb, I would read to them already,” said Davao, a father of three.

“We were told and we read before that even when a child is still inside the womb, they feel and can hear us already. So we played music for them and we read to them,” he said.

“Aside from bonding with the baby inside the stomach, you are also bonding with your partner. So it’s really helpful,” he added.

On Saturday, stories about hardworking and dedicated fathers were the highlight of the Inquirer Read-Along session held in advance celebration of Father’s Day, which will be observed worldwide on June 16.

Davao read Adarna’s “May Higante sa Aming Bahay” (There’s a Giant in Our House), written by Rhandee Garlitos, a story about a son’s awkward encounter with his father who had just arrived from a foreign country after a long absence.

“It’s always a pleasant and exciting experience to read to kids. I enjoyed seeing the reactions of the children,” Davao said.

“And you know their reactions are very real and very raw. Even I as a reader feel like I’m a child again,” he said.

Other featured readers during Saturday’s session were actors Miguel Valdes and Zyren dela Cruz who read in tandem Russell Molina’s “Anong Gupit Natin Ngayon,” a story about a father and son’s relationship dynamics as they grow older; and veteran storyteller Rich Rodriguez of Ang Pinoy Storytellers who read Luis Gatmaitan’s “Sandosenang Sapatos,” a story about a shoemaker whose youngest daughter, Susie, was born without legs.

On the other hand, Dela Cruz said reading is important, especially for children, because “we learn lessons from the stories we read that we can apply to our lives.”

A child actor, TV host and dancer, Dela Cruz is currently a Grade 6 student in a school in Marikina.

Davao, Valdes and Dela Cruz are cast in the Cinemalaya film “ANi” (The Harvest), the first science fiction full-length film to be part of the film festival produced by Black Sheep, Wanderstruck Films and Syncrosynth Creatives.

“ANi” is set in dystopian Philippines in the year 2050 and follows the unlikely friendship between a boy named Mithi and a robot named ANi.

Davao plays the role of Mithi’s estranged grandfather who was secretly leading a rebellion against war robots.

“I talked about this project with one of the heads of Cinemalaya, Director Laurice Guillen, and she encouraged me to take on the project because it’s really good,” he said.

The veteran actor added that it’s a very exciting project for him because it is his first time to engage in a venture of this scale. —Inquirer Read-Along staff