The last Botong and the first Zobel | Inquirer Lifestyle 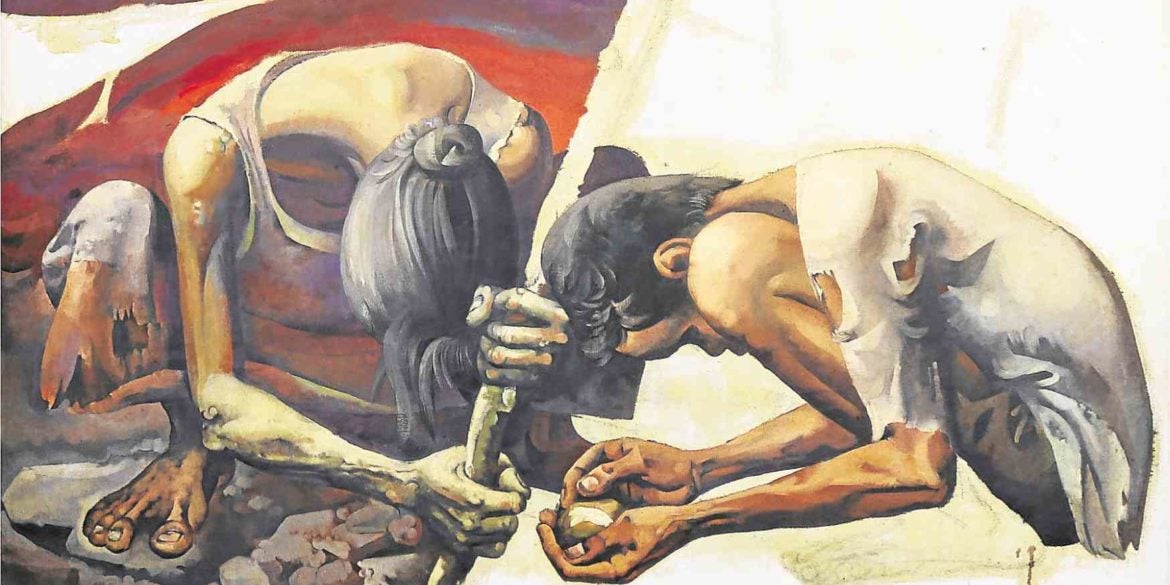 The last Botong and the first Zobel

The last major work of muralist Carlos “Botong” Francisco before he died and the first painting ever by Fernando Zobel are among the top lots in León Gallery’s Spectacular Mid-year Auction 2019 on June 22.

Nearly 3 feet in height and five feet in length (88 x 49 cm), Botong’s work was left unfinished on the year of his passing (1969). It portrays a pair of diggers of the lowly but sweet Philippine root crop, their heads bowed to the earth so that their faces are not seen, making them a portrait of the Filipino everyman.

Zobel was an abstract trailblazer, but León will auction off his representational work, “Homage to Vicent Van Gogh: ‘Wheat Field with Cypresses.’”

Composed during his Harvard years circa 1946-1948, the small oil-on-canvas is the artist’s first ever painting by his own account. In a letter to the mother of a Harvard friend, he wrote, “It is the first painting I ever did and it is a copy of Van Gogh.” Floor price is P1.2 million.

Meanwhile a rare work by Lorenzo Guerrero (1835-1904), the teacher of Juan Luna and Felix Resurreccion Hidalgo, is expected to draw fierce bidding.

Formerly in the collection of Pedro Roxas, “Mariquina” is one of the few surviving works in the country by Guerrero whose Ermita house was laid to waste by the war. The beautiful painting depicting a bucolic scene from the Marikina river underscores what his biographer E.A. Manuel claims as the artist’s main strength: “It is in the reproduction of local scenes that Guerrero will be equally remembered (as with his religious themes), if not better appreciated.” Floor price is P12 million.

Fierce bidding is likewise expected for Guerrero’s student Hidalgo’s “After the Typhoon.” It evokes the funereal calm after the passing of a storm and the work consolidates Hidalgo’s reputation as a master of seascapes. Bidding starts at P8 million.

Auction favorite Ang Kiukok is represented by several lots, most of them drawing from his Agonized Christ series, the most expensive of which is “Fifth Station: Simon Helps Jesus Carry His Cross.” Cubist in technique but religious in fervor, the work is striking and compelling, showing the national artist’s compositional verve and colorist’s vitality. Bidding starts at P7 million.

Among several Juvenal Sansó’s in the auction, the most interesting are Lot 35 (Untitled), an evocation of a primeval forest; “Isles of Hopes and Dreams,” a dreamlike depiction of a craggy coastline; Lot 147 (Untitled), which depict a Mont St. Michel-like structure looming over a panorama basked in dusty yellow; and perhaps the most uncharacteristic of the artist’s works, “Warm Tides,” a plein-air painting of a sea coast with none of artist’s usual expressionist overlays.

Abstract expressionist Florentino Concepcion (1933-2006), who became dean of the University of the East School of Fine Arts and influenced Agusto Albor, Romulo Galicano, Lao Lian Ben, is represented by “Transcendental Reflection” (floor price P800,000) and “Interaction” (P300,000), both showing his style of limited but bold use of colors.

Conceptualist trailblazer Roberto Chabet (1937-2013) is represented in the auction with “Bestiary,” a mixed-media work from his 1960’s collage phase, in which he mixes maps, drawing on handmade paper, children scrawls and drawings, and envelopes without addresses.

One of the strongest works in the auction is perhaps Justin Nuyda’s “Search 94,” an oil-on-canvas signed and dated 1969, the year of Stanley Kubrick’s celebrated movie, “2001: A Space Odyssey.” According to the catalog, it is a “brooding vision of sweeping and cosmic elements in a strange and rarefied space.”

A more familiar lot is Oscar Zalameda’s “Basketball,” in which he put to work his unique brand of Cubism to depict the modern Filipino’s favorite sport. “Here, Zalameda combined solid and more transparent colors to enhance the subject’s dynamism,” says the catalogue.

Quite interesting is foremost abstractionist Edwin Wilwayco’s “Birds of Paradise #93 S-IV.” While most of the avian series literally abstracts the species through brilliant striking colors, this painting is minimalist and monochromatic; only the bravura gestural strokes evoke the bird’s exotic colors and wild flights.

Among the sculptures, the most provocative is Julie Lluch’s “Kairos I,” done in cold-cast marble and depicting a woman seductively supine on a couch being eaten up by flames of desire. —CONTRIBUTED

Preview of León Gallery’s Spectacular Mid-year Auction 2019 will be on June 15-21 at Eurovilla 1, Legazpi Village, Makati. Access catalogue via www.leon-gallery.com.