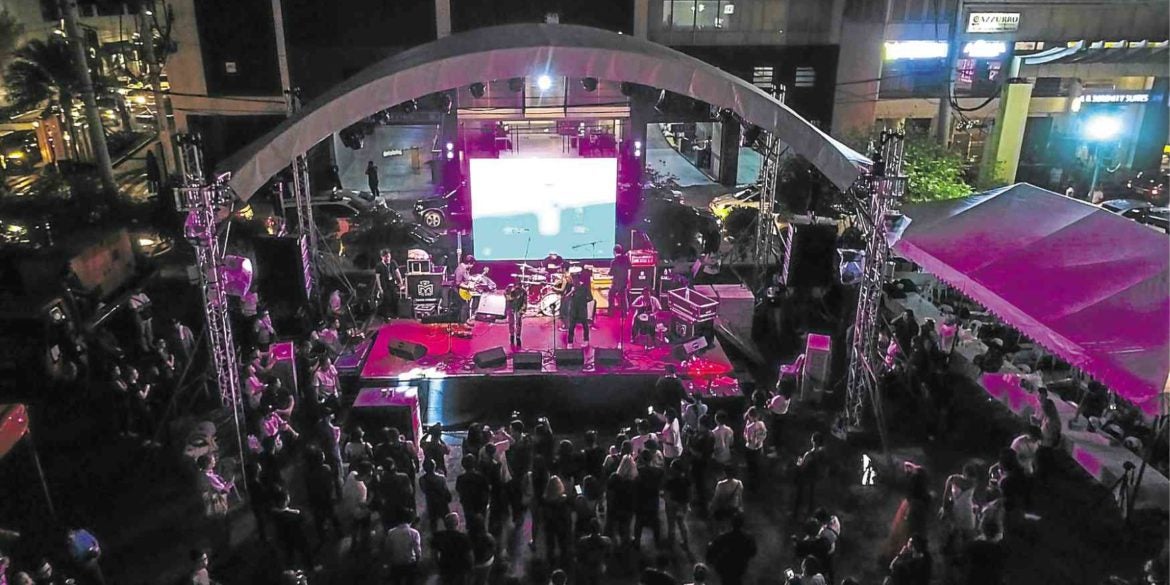 French music fest at the parking lot of A. Venue on Makati Avenue,Makati City

For its 25th anniversary, Fête de la Musique in the Philippines will hold its biggest festival with more than 70 stages to be set up in different parts of the Luzon mainland and in Palawan in a bid to go back to the original vision of its founders of “music everywhere and concert nowhere.”

The Philippines will have a monthlong celebration this June in various locations in Metro Manila, Pampanga, Batangas, Baguio, Bulacan, Laguna and Palawan. Fête will be graced by hundreds of Filipino artists and will feature different genres such as jazz, rap and rock.

Fête de la Musique, which translates to “music festival,” is a worldwide celebration of music that originated in Paris in June 1982. It was founded by French composer Maurice Fleuret and France’s culture minister at that time, Jack Lang, with the vision of “music everywhere and concert nowhere.” This free-for-all festival is currently celebrated in 120 countries.

Undoubtedly, Fête de la Musique is one of the most attended French events in the Philippines.

Despite the fest’s continuous growth, organizer Alliance Française de Manille (AFM) would like to keep it in line with its original vision and maintain its character.

“Expanding is not contradictory with being the same. It is getting the visibility for what Fête de la Musique is,” said Jean-Pierre Dumont, executive director of AFM. “(This is) a Filipino event but with a French concept that is also taking place in France.”

“What is happening here is already amazing especially in terms of size,” he added. “There is so much involvement from musicians and the public.”

Singer Kat Agarrado told the Inquirer that it was always fun performing in Fête de la Musique because the artists drew from the energy of the crowd.

She added that Fête had always supported OPM (original Pilipino music) and attracted a large crowd of music aficionados. “The festival makes us happy as musicians.”

The festival started last June 8 at the Virlanie Foundation in Makati with nurse-rapper Fatima Palma-Loo leading the show “Music Heals: Fête de la Musique Pop-Up.” It aimed to showcase music as a tool for healing and inspiration.

KMC Skydeck in Bonifacio Global City, The Peninsula Manila’s Salon de Ning in Makati and Rizal Open-Air Auditorium in Luneta Park will hold pre-Fête de la Musique parties on June 15. This is a prelude to the main stages of the festival.

On the same day, simultaneous shows featuring various musical genres will be mounted in 50 pocket stages in different bars around Makati.
The public can also enjoy the festival at Intramuros’ Puerta Real Gardens on June 28. The main stage will see performances by Munimuni, Sandwich and Juan Karlos. There will also be a special production number titled “All-Female French-Filipino Medley,” featuring Radha, Vanessa Monot and Palma-Loo.

Festival will be held in different stages around Luzon on June 29.

Baguio’s main stage will be at Malcolm Square. Bulacan and Pampanga will have their shows at Pangnan Grill & Restaurant in Guiguinto and Anchor Bay Gastro Pub in Angeles City, respectively. Batangas’ festival will be at La Consuelo Spring Resort in Rosario.

Puerto Princesa City Baywalk will be the main stage in Palawan. Bars will serve as small stages.

On the same day, there will be a closing party at 20:20 bar in Makati hosted by DocDef and Gabi na Naman Productions.

Admission is free. Audiences can also get a chance to win a round-trip ticket to France by uploading a 25-second video about their unforgettable Fête de la Musique experiences.—CONTRIBUTED