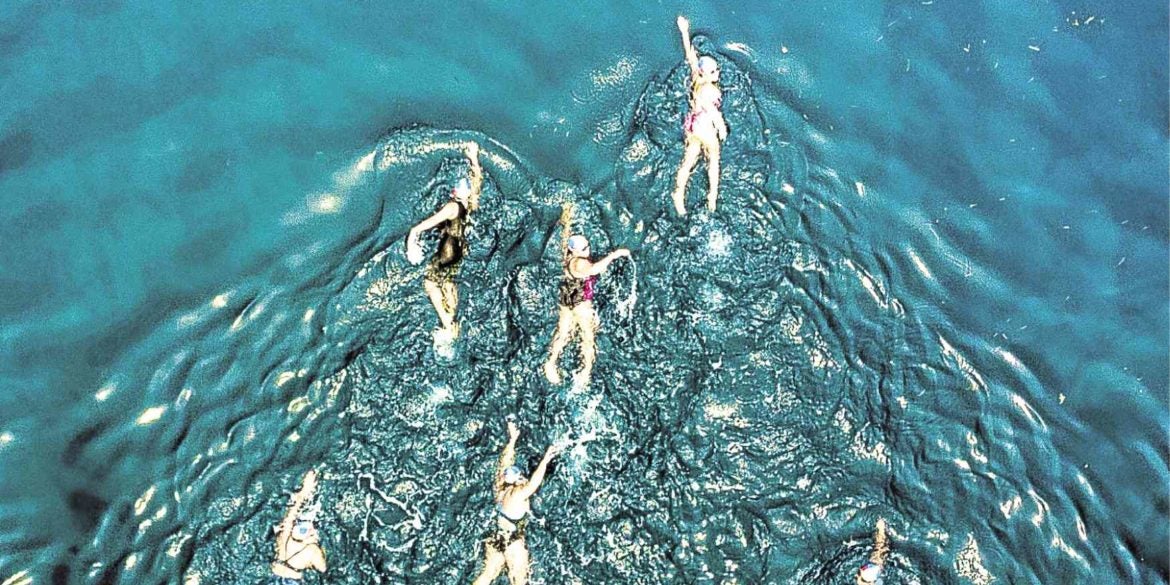 It takes strength, endurance, and a great deal of courage to swim across 22 km in open water. On May 26, six brave women did precisely just that.

Collectively called Ocean 6, the six made history as the first women to swim across the ocean in the country, rhythmically moving through waves and choppy waters, as they swam from the shores of Silliman Beach, Dumaguete City in Negros Oriental, to Siquijor, Siquijor Island.

With nothing but deep-blue darkness beneath them for hours on end as they crossed the Tañon Strait, never did the women feel they were, well, out of their depth. With ages ranging from 28 to 51, they were out to prove that anyone—any woman—can leave their comfort zones to conquer their dreams.

“We want women to feel empowered. We are not athletes. We are your average working women. If we can do it, anybody can,” said Monique Furbeyre, team leader of Ocean 6.

The team is made of average Janes from Dumaguete—Furbeyre, Maru Rodriguez, Sheila Pabalate-Omaguing, Flom Barot-Datoy, Frances Hope Yap, and Ching Furbeyre. How average? Pabalate-Omaguing, for instance, only learned how to swim when she was already in her 40s.

Ocean 6 began its adventure in March last year, in time for Women’s Month. They swam from Negros island to Cebu, from the town of Sibulan, Negros Oriental, to Santander, Cebu, covering a distance of 6.4 km, for over three hours and 20 minutes.

This year, for their next endeavor, the team aimed high. The women wanted to match the distance covered by endurance swimmer and environmental lawyer Ingemar Macarine. A former varsity swimmer from Silliman University, he is now known to the locals as the Pinoy Aquaman. In 2017, he swam from Dumaguete to Siquijor, covering a distance of almost 25 km.

But Ocean 6 encountered strong currents as the women inched closer to Siquijor, forcing the team to reroute, cutting their distance from 26 to 22 km. The women made it to Siquijor just before their cutoff time of 5:30 p.m. It took them eight hours and 40 minutes.

It would have been dangerous to keep on swimming after sunset, as many shark species are nocturnal creatures. Sharks are sluggish by day but are active, strong swimmers at night. And Siquijor waters are rumored to be shark-infested. (Hammerheads have been sighted in Tañon Strait, as well.)

But the risk of a shark attack, while real, is small. Despite their reputation, sharks would rather feed on marine mammals and fish.

For the team’s safety, however, 10 small boats surrounded Ocean 6 the entire time it was crossing the ocean. One boat had a team of medical experts. The Sibulan Rescue 613 also sent out a unit equipped with a shark “deterrent” device that emitted a strong electromagnetic field. It won’t hurt a shark, but it would make them want to turn around.

The Philippine Coast Guard-Dumaguete, Siquijor Bantay-Dagat, Norad 7, lifeguards, swim coaches from Silliman University and Negros Blue Dolphins were also onboard. Divers from the boats routinely went into the water to spot dangerous creatures.

“The locals told us not to be scared of the sharks, but to be afraid of barracuda instead,” Furbeyre said. Some species of barracuda are aggressive. They are scavengers and could mistake swimmers for large predators, following them in hopes of finishing off the remains of their “prey.”

“When you swim in open water, anything can happen. You can encounter fish that can harm you, creatures that can attack. But when you’re there, you don’t think about that anymore. I guess your fear disappears when you’re with a group,” Furbeyre said.

Fortunately, there were no shark or barracuda encounters. There were, however, brushes with jellyfish—many of them. While in the middle of the ocean, Furbeyre recalled sightings of glistening, shiny objects. Fearing they were jellyfish again, she was mortified to discover they were plastic—bags and junk food packages.