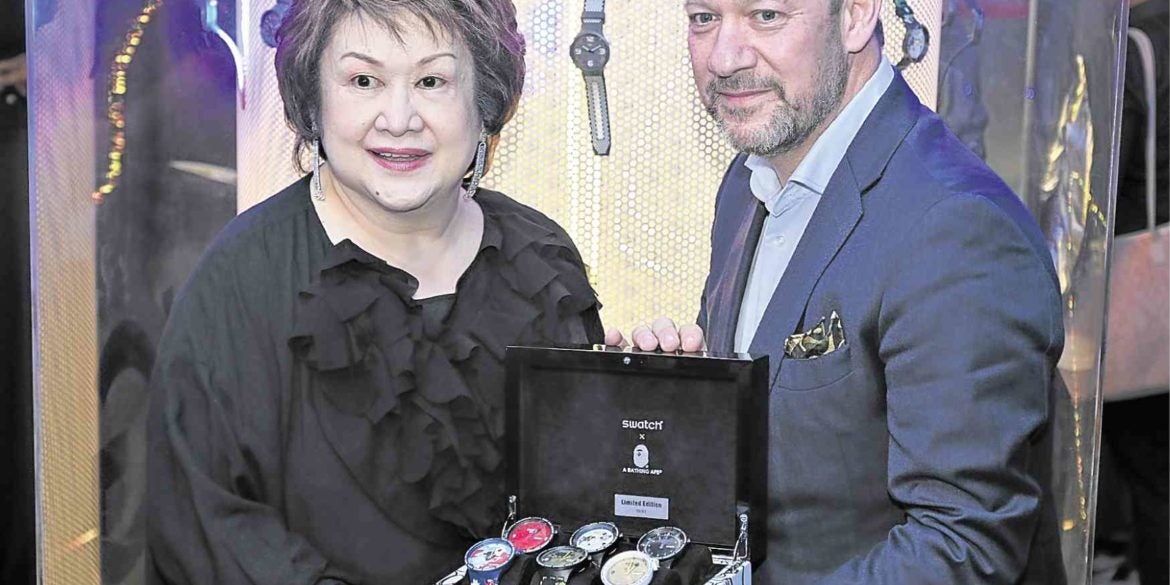 Sold out in two days after its Tokyo launch, it’s known for its massive size and the collaboration between the Swiss brand and the Japanese streetwear label

A party was about to start at the Swatch Building in Makati, and Swatch International vice president and COO Gonzalo De Cevallos was wearing two watches—Big Bold BAPE the World on his left wrist and BBBlanco on his right.

“I have two wrists so I’m wearing two,” he said, smiling. “These are my favorites from the collections.”

“We wanted to bring something bold, something unexpected,” De Cevallos said. “We thought that it was the right moment to introduce a watch with a bigger size.”

With its massive size, Swatch Big Bold is a watch with a big personality. It’s a real statement piece. Initially, it seemed the line would appeal more to men. But women have fallen in love with Big Bold, too.

“I would say it’s 60-40, 60 percent men,” De Cavallos said. “It’s a watch that everybody can wear. It’s for men, women, teenagers, millennials. It looks really good on the wrist, very sexy.”

Swatch and BAPE’s collaboration began with a chance meeting between the two brands.

“We started to talk about what they were doing, what we were developing,” De Cevallos said. “We showed them Big Bold and they really loved it because it really represents their spirit.”

Swatch and BAPE’s creative teams worked together for more than eight months on the collection. “The result is outstanding. It’s the look of the Swatch Big Bold, but the spirit is absolutely BAPE,” said De Cevallos.

They may have been born 10 years apart in different parts of the world—Swatch in 1983 in Switzerland and BAPE in 1993 in Japan—but the two brands have more in common than you think.

“We try to do things in an unexpected way. We also like to have fun. And we like our customers to feel emotions when they wear our product.

They feature a newly designed signature BAPE camo (camouflage) pattern on the dial or strap, the brand’s Ape Head logo and the Swatch logo.

Only 1,993 pieces of the Paris, Tokyo, London and New York watches will be released—a homage to the year BAPE was founded.

The 983 pieces of the Bern watch will be available, while there will be 19,930 pieces of Big Bold BAPE the World available. It has a map of the world on the dial and BAPE’s classic green camo.

“I like the concept of a global watch that is a tribute to the world,” De Cevallos said. But he loves the Tokyo watch, too. “From the design point of view, it’s my favorite.”

On some dials, the numbers 3, 8 and 9 are highlighted in contrasting colors, another tribute to the birth year of both brands. Each watch case comes embedded with a numbered plate.

Earlier this month, the Swatch X BAPE collection was unveiled in a global press event in Tokyo, where BAPE pioneered street culture. The collection sold out in Japan in two days. It is expected to sell out, too, when it becomes available worldwide on June 15.

Swatch Philippines celebrated the Big Bold and Swatch X BAPE collections with the Big Bold event at the Swatch & Swatch Building in Makati on June 7.

The party, hosted by Perea Street, with performances by Butta B, Bret Jackson and international DJ Yeti Out, is also Swatch’s way of kicking off its 30th anniversary in the Philippines.

“The Philippines and Swatch have a very special love story. Our team here has done a fantastic job, and the product really brings something that touches Filipinos,” said De Cevallos. “I don’t say this in all parts of the world. But it’s clear, there’s a local connection between Swatch and Filipinos. I hope that we continue another hundred years here.”

This love story began when Virgie Ramos brought Swatch to the country. “She is the ambassador. She is Madame Swatch,” said De Cevallos. “I always say that if I had two more Madame Ramoses in the world, my life would be easier. But I have only one.”

Thirty years after it hit our shores, Swatch, now available in more than 140 countries, remains a brand that’s loved by Filipinos.

“The Philippines cannot compete with bigger countries like China in terms of sales. But in terms of passion and creativity, it’s on top. It’s true. I’m not  saying it just because I’m here. It’s a pleasure working with the team here,” he said.

Asked if there’s anything that makes the Philippines unique as a market for Swatch, De Cevallos said: “The way they they love our brand but also the type of watches that they buy. They are colorful, they’re really not the classical watches that we sell in other parts of the world… This really reflects the personality and the identity of the Filipinos.”

This love for Swatch is something De Cevallos can relate to. He said, “Apart from being part of the Swatch team, I’m a fan of Swatch. I’m really a collector. I have more than one Swatch for all the days of the year.”