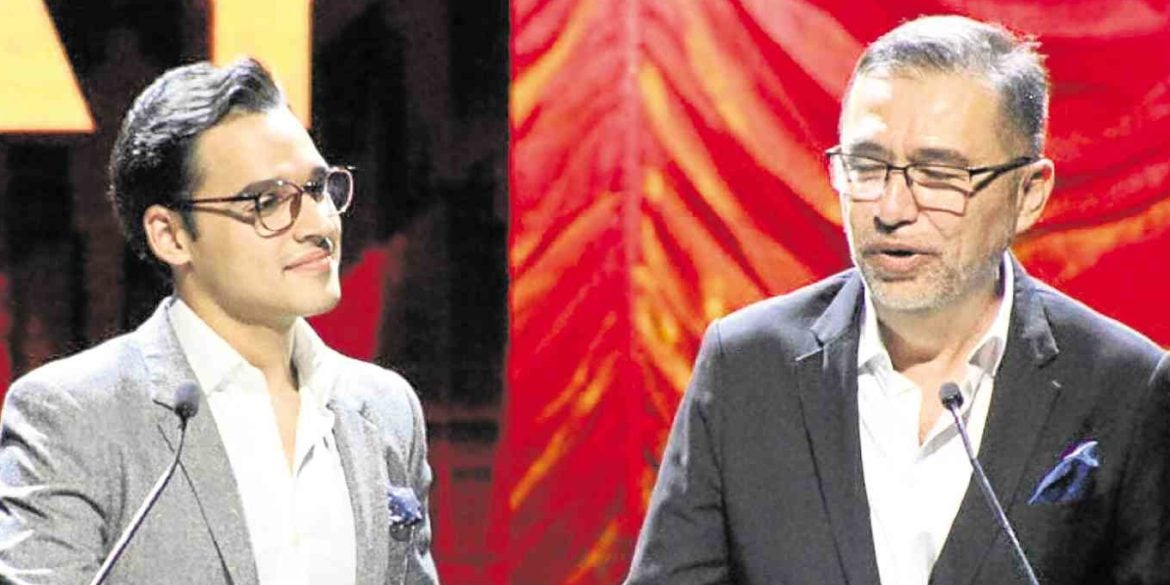 Theater passes on the torch, but first—a celebration of legacy

‘We are standing on the shoulders of giants... The lessons will live, and we can raise the bar... and the new generation can stand on our shoulders’

The 11th Philstage Gawad Buhay Awards (Read “‘Himala,’ APO musical triumph in 11th Gawad Buhay” by Vincen Gregory Yu, June 1, 2019) at Onstage Theater, Greenbelt 1, was both a celebration and a call to arms for the next generation to build on the legacy of its forefathers in the arts.

The time is now. A widening gap has to be filled. Some of the “elder statesmen/women” of Philippine theater have long departed. And the disciples of these pioneers—the former leading men and women of the stage—are doing parental and more mature roles; the directors once hailed as trailblazers are now mentors backstage.

The good news is, the younger generation is emerging, and the Gawad Buhay Awards made sure that the audience took note. As the theater pillars went onstage to present the 25 awards on May 28, each of them was accompanied by a youthful counterpart—hence, the proliferation of titos and titas who were treated with gratitude, if not reverence.

Red Turnip Theater’s Cris Villonco, whose directorial debut in “A Doll’s House Part 2” won the Outstanding Stage Direction for a Play, tearfully thanked her “aunts and uncles” who had made the victory possible.

She was referring to the veteran thespians she had directed in that production: Menchu Lauchengco-Yulo, Sheila Francisco, and her uncle, Carlitos Siguion-Reyna, a prominent film director who was new in theater performance.

Radio DJ Jobim Javier, hailed as one of theater’s breakout stars of 2018, thanked his father, APO Hiking Society’s Danny Javier, after winning the Male Lead Performance for his role as the playboy-with-a-heart in 9 Works Theatrical’s “Eto Na! Musikal nAPO!,” the popular jukebox musical based on APO’s discography.

“This is for you, Dad, wherever you are—most likely at home, where I left you,” he said in a quasi-somber tone.

The mixture of solemnity and ribbing and heckling showed how the theater community was a close-knit family.

Stage and film veteran Ricky Davao butted heads with one of musical theater’s princes, Jef Flores, as they presented the awards for Best Male Lead in a Play.

Sweet Plantado-Tiongson (The CompanY) took a friendly swipe at copresenter and fellow composer Ejay Yatco: “It’s okay that you won an award because I am famous naman.” Yatco won the 2018 Gawad Buhay for Best Musical Direction for Repertory Philippines’ “Hair.”

That night, the theater artist —either as awardee or presenter—had the chance to talk about his/her legacy and what he/she learned from their mentors.

Macuja-Elizalde recalled how, when she was 15, her parents were putting pressure on her to give up ballet for a safer career—in finance.

Radaic somehow learned about her dilemma and wrote a letter to Lisa’s parents, Cesar and Susan Macuja: “The Philippines has so many accountants, but we do not have many ballerinas. Let your daughter pursue her dream.”

The most heartfelt speech came from Sheila Francisco, who went from tearful, silent to screaming with joy, after winning Best Female Featured Performance in a Play for her role as the smart, saucy housekeeper in “A Doll’s House Part 2.”

“I don’t know what to say,” she stammered. “I just want to stay here.”

But what brought the house down was her walk down memory lane: “I want to thank director Freddie Santos for believing in me and inspiring me to go into theater… although Audie [Gemora] did not think I was good enough!” Then, spotting Gemora, Philstage cofounder and president, in the audience, she barked, “Audie… ha!”

Gemora was game enough to stand up and applaud.

Perhaps the best speech was by director and playwright Jaime del Mundo, who presented the Outstanding Stage Direction Award for Best Musical. Standing beside his protégé, acclaimed actor and up-and-coming director Nelsito Gomez, Del Mundo said: “We are standing on the shoulders of giants … The names will be forgotten, but the legacy will not. The lessons will live, and we can raise the bar… and the new generation can stand on our shoulders.”

Gomez affirmed: “We will pursue the legacy and pass it on. We will show how far the Filipino theater artist can go.”

Driving home that message later was the event’s last performance, mostly by the bright young students from the Ateneo Blue Repertory, Trumpets Playshop, Tuloy Foundation, and the Philippine Opera Company.