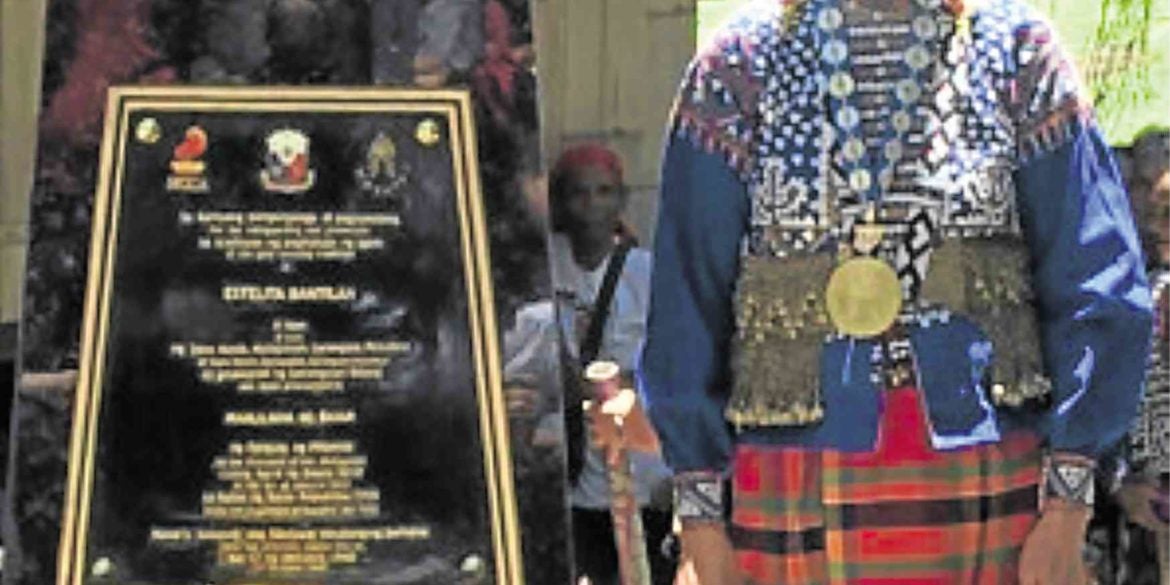 Bantilan beside her Gamaba marker

Bantilan, a septuagenarian who hails from Upper Lasang, Sapu Masla in Malapatan, is one of three recent Gamaba—also called National Living Treasure —awardees together with textile weavers Yabing Dulo of South Cotabato and Ambalang Ausalin of Basilan.

Gamaba is the counterpart of the National Artist award in traditional arts.

It was first given in 1993 to Hanunuo Mangyan poet Ginaw Bilog of Oriental Mindoro, Pala’wan musician and storyteller Masino Intaray of Palawan, and Maguindanao musician Sumaon Sulaiman of Maguindanao.

Bantilan, who was born Labnai Tumandan but later chose Estelita as her first name and gained her last name through marriage, started her craft at a young age, weaving intricate mats using a pandan variety called romblon.

Marian Pastor-Roces describes her works as unique and excellent.

In an article she wrote of Bantilan, Roces said Estelita “carved out considerable time from domestic and farming responsibilities to accomplish some of the biggest, most subtly beautiful mats to be seen anywhere in Southeast Asia today.”

She adds Bantilan “has continued to cultivate a personal aesthetic through half a century” of dedication to her chosen craft.

She said this is where the works of Bantilan and her students will be showcased and will also serve as a weaving school.

This will also enable the community to give importance to their weaving tradition, she added.

Meanwhile, barangay indigenous peoples representative Edwin Tumandan said during the event that he is very happy that a Gamaba awardee came from their village.

He said it is important that their intangible heritage of mat weaving is practiced more so that many would benefit from it.

Coinciding with the opening of the center is the community celebration for Bantilan, giving her community to celebrate her award as only few of them were present during the awarding in Malacañang last year.

In a short message, Bantilan thanked the NCCA, her community, and the T’boli cultural dancers from South Cotabato who gave her a tribute through cultural performances. —CONTRIBUTED