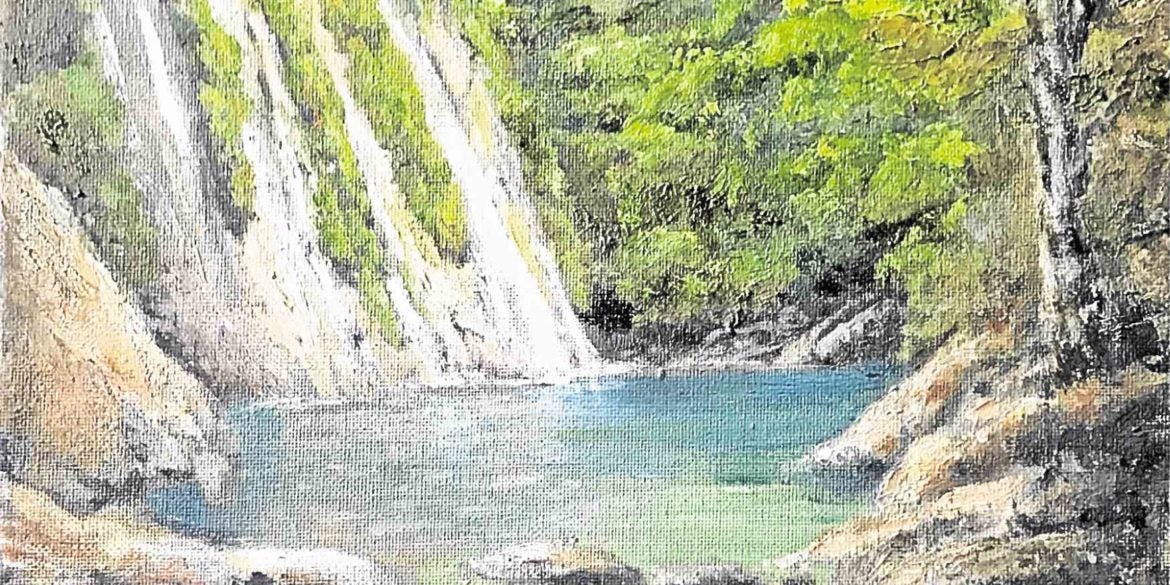 Periquet uses brush and palette knife techniques to create this realism, down to the water, trees and rocks.

Why noted interior designer Tina Periquet is drawn to painting—realism

Opening her first exhibit June 22, she says, ‘You can’t control the world outside, but you can create a perfect world within your sphere’

With only two years of intense art training, Tina Periquet, interior architect and principal designer of the Periquet Galicia firm, has become a specialist in realism, particularly portraits.

On June 22, she opens her first solo exhibit at the Legacy Art Gallery of sportsman-turned-painter Dante Silverio. She will present 26 paintings and some furniture designs.

“Portraits are the hardest, but that is where I feel strong,” she says. “There are very few portrait painters here. It’s challenging to capture lightness. That’s not because it necessarily needs special training. It’s a talent.”

In 2018, Periquet and her husband, architect Dominic Galicia, were lauded for the restoration of the facade and renovation of the interiors of the Philippine National Museum of Natural History.

With a master’s degree in interior design at Pratt Institute in New York, Periquet has done local and international projects, some of which have been featured in coffee table books and magazines.

In 2017, Martin Lopez, head of Far Eastern University’s President’s Commission on Culture, told Periquet about the weekly Saturday sessions of the Visual Artists’ Guild at Silverio’s residence. Although she was then at the peak of her design career, she also wanted to pursue a new interest.

Silverio showed her his impressive portfolio of paintings done in a span of 20 years. Willing himself to paint every day—despite a busy businessman’s schedule—Silverio has mastered the art.

“The Visual Artists Guild focuses on figurative realism, which is not common these days,” says Periquet. “Everyone is into abstraction, surrealism and abstract impressionism. People are confused about what art is. They think realism is less interesting because it is easy to read or understand. It’s not just painting pretty pictures.”

She adds: “Our group represents the return to classical values. It’s one thing to achieve likeness of the subject, but you have to be very accurate in the muscles and skeletons to create the three-dimension effect.

Progressing quickly, Periquet became a member of the Portrait Artists’ Society of the Philippines, headed by Romulo Galicano. Guild members Edgardo Lantin, Gig de Pio Sr. and Silverio urged her to pursue studies abroad and focus on the “hardcore” art—realism.

Periquet enrolled at the Art Students League, one of the most influential schools in the United States, which has produced Robert Rauschenberg, Man Ray and Mark Rothko.

“Others provoke, seek disruption or promote dynamic change such as social realism. I prefer creating the sense of rightness by painting environments that make you feel calm and centered,” says Periquet. “These are achieved by balance and harmony, getting the right proportions, and putting a sense of order. All those are important to me. You can’t control the world outside, but you can create a perfect world within your sphere.”

She expresses similar aesthetic values of visual arts into design projects with interiors that are warm, stylish and inviting—cocoons from the maddening world.

“As a designer, you have as tools the lights, colors and forms to mold space. As a painter, you capture the same sense of space on a two-dimension plane. With the use of pigments, your picture should express light, form and shadows to create depth. It’s challenging to translate these values into the canvas. You’re not capturing a girl or a landscape but portraying the illusion of reality,” explains Periquet.

After graduate school in New York, she was trained as lighting designer at Fisher Marantz Stone, a firm specializing in the use of light in architecture.

She was also a former senior associate at Orsini Designs.

She points out that, “as a specialist in lighting design, you apply the properties of light in transforming surfaces. It can produce certain effects like iridescence, radiance, translucency, depending on the surface that light touches. If glass is lit, transparent light goes right through it. If the glass is frosted, glass will come in partially, casting a white glow. If the glass is painted on the back, it will be opaque as the light is blocked. It will reflect instead.

“When you are expressive with light and its effects on surfaces, you can create poetry. Interior design isn’t just about decorating. It’s expressing ideas and letting surfaces speak.”

She adds that light also produces certain effects on metal surfaces. It can bounce if the surface is polished or get soaked in by a matte surface.

“Colors don’t happen unless there is light. They are the effect of wavelengths of light and how they are reflected or transmitted to a surface,” she says.

“Most artists are intuitive. It takes them a long time to grasp the color theories. I apply the theories of a lighting designer to art. I’ve been equipped with scientific knowledge. That’s my edge,” she adds.—CONTRIBUTED