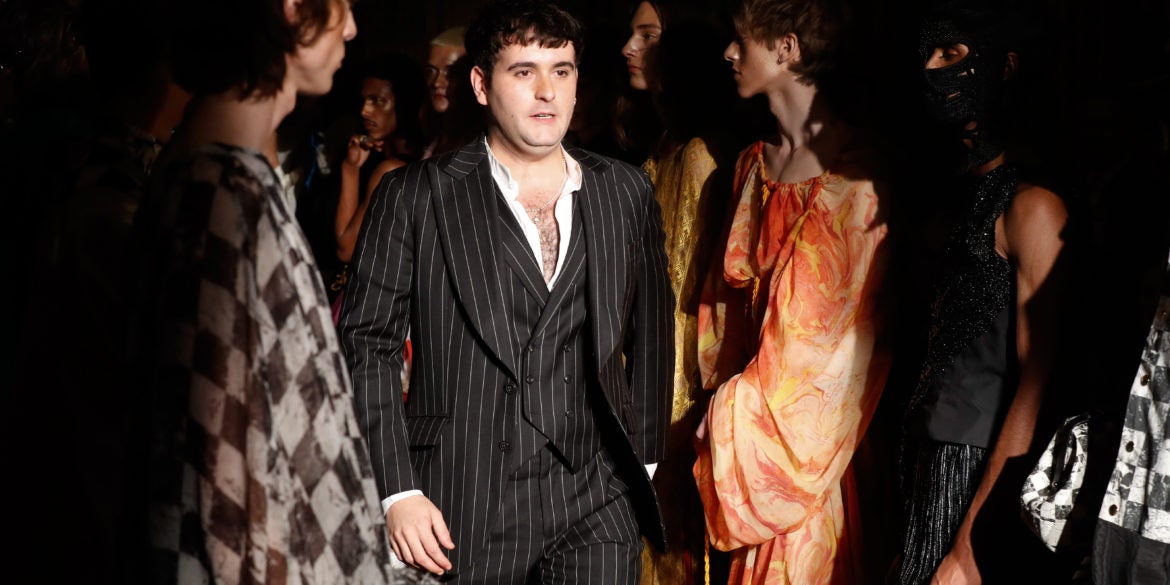 It was not quite the return of the toga, but Spanish wunderkind Alejandro Gomez Palomo turned the fashion clock back 2,000 years at his Paris men’s show Tuesday.

The flamboyant Andalusian conjured up Rome at its most decadent with a procession of beautiful boys who he claimed had just stepped from the frescos and mosaics of the lost city of Pompeii.

“Buried under the volcanic ashes of Mount Vesuvius lies a distant civilisation of Palomo boys who for centuries have been subject to a deep lethargy,” he declared.

Now they have come back to shake fashion from its long conformist sleep, he added, and to “become the man of the future.”

Palomo believes pretty dresses are not just for girls and his clothes can be worn by men, women and everyone in between in.

And you could imagine Nero or the boy emperor Elgabulus fighting with Madonna, Beyonce and Miley Cyrus — all fans of his Palomo Spain label — for some of his new gladiator glam.

Watch out for versions of his centurion sandals, which strode a stylish line between sneaker boot and espadrille, in the shops next summer.

To the sound of imperial trumpets, he sent out his resurrected Roman dandies, socialites and emperors in clever and erudite clothes made from everything from jute to the flounciest feathers.

Laurels in their hair

Palomo’s dive into Roman accessories — armbands, torcs and chainmail — was so deep, one model wore a golden nose similar to the solid gold hooter sported by the 7th-century Byzantine emperor Justinian II.

As for the toga, he took it on a wild bacchanalian dance from a relatively simple embroidered tunic to the glammiest of tulle feather-fringed evening dresses.

Despite their feminine line, Palomo insisted that his clothes are very much designed and tailored for men — even if lots of women were now wearing them.

“I would never call them women’s dresses or say they are for women,” he told AFP. “Everything is for men.”

The 27-year-old designer said he wanted to “liberate” men from the straitjacket of suit and trousers.

“It’s great that women have helped get my clothes known, but I do not feel so qualified to design for them,” he added.

Cowboy in a dress

Palomo, who lives and works far from the madding fashion crowd in his home village of Posadas near Cordoba, weaved the Roman, Spanish and Arab influences of his native region into his clothes.

But there was also a nod to the transgender hijra culture of the Indian subcontinent.

Young New York designer Emily Adams Bode, who made her Paris debut, also has a sideways view of what men’s fashion should look like.

Bode is known for turning 100-year-old tablecloths or 1960s towels into rather beautiful shorts and jackets, all with the lightest of off-beam touches.

And she didn’t disappoint with her debut Paris collection that gently flirted with gender.

Another American debutant, Spencer Phipps, took his inspiration from the much more straight-down-the-line urban cowboy, with Stetsons galore in his line of sustainable streetwear.

But that did not stop blurring the lines with one cowpoke wearing a dress over his hiking boots.

London-based Swedes CMMN SWDN toyed with the unisex vibe in their show, wrapping the heads of several of their models in print scarves and then layering the motifs through their looks.

Japanese creator Takahiro Miyashita also had a skirt or two in his radical deconstruction of the tuxedos and military dress uniforms.