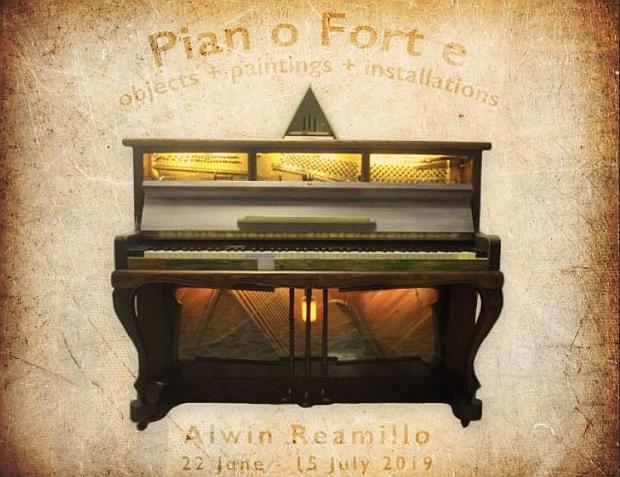 Part of the xhibit poster

MANILA, Philippines — In his installation and bricolage art, Alwin Reamillo has always focused on the loudest issues in the country, but he approaches them through a display of a myriad of symbols — both popular and academic, sometimes esoteric and even personal. By doing so, he hopes to show reflections of Filipino social and political culture.

In his 22nd exhibit, called “Pian o Fort e,” his goals remain the same — “a show of linguistic fragments,” as he puts it.

As a press statement makes it clear, the title is drawn from the Italian term “pianoforte,” referring to the instrument that’s now more commonly called as a piano.

“But in musical notation, ‘pianoforte’ refers to a dynamic mark (pf), which directs the music performer to attack the written note at the dynamic level of ‘piano’ (soft) followed by a quick increase in volume, to ‘forte’ (loud),” the statement says.

“Thus, one can say that his art’s every fragment performs at ‘piano’ level, but then, once gathered with the others, or reassembled, if you will, it explodes into a ‘forte’ of agreements and conflict with an impact upon the viewer’s consciousness,” the statement adds.

The way the title is written, however, has more meanings.

As the statement, explains: “In its Filipino sense that means ‘Pian or fort, e,’ with ‘e’ uttered as a Filipino interjection or discourse marker almost equivalent to ‘yeah’ or ‘you know’ or ‘you see.’

“In Chinese, ‘pian’ means a piece of writing or a chapter. ‘Fort,’ meanwhile, in English means a fortified building. While every fragment in Reamillo’s pieces refers to a symbol in a people’s language, each — in fact — also refers to an expression of either agreement or resistance.

“This is how to approach Reamillo’s pieces and the fragments therein, each as a record of a people’s various discourses (both fact- and fantasy-based) towards negotiating their never-ending problems.”

To see how all these translate into art, you might want to drop in at the exhibit, which runs from June 22 to July 15 at Altro Mondo Creative Space at 1159 Chino Roces Avenue, Barangay San Antonio in Makati.

The exhibit opens on June 22, a Saturday, at 6 p.m., with performances by the Tago Jazz Collective and several pianists.