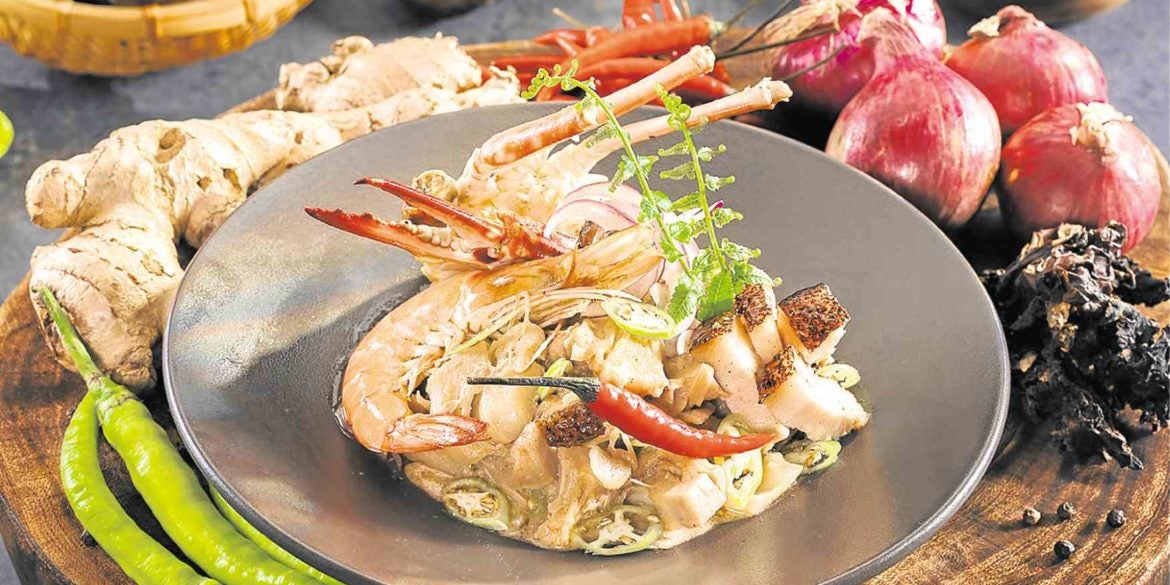 Heritage dishes, the likes many of us have never heard of, much less tried, are Christopher Carangian’s forte.

A history teacher-turned-chef, Carangian has researched on forgotten recipes and reconstructed them. His mission is to preserve the Philippines’ culinary roots.

Aside from being the founder and president of Razorchef Philippines, he also heads Culinary Generals of the Philippines, which promotes the country’s historical identity through the exploration and reintroduction of traditional cuisine.

Ciento Quinse is an extinct Chavacano dish that Carangian discovered at the wake for a friend in Cavite City.

It it said that during the Spanish occupation, the dish was popular in the coastal areas of Cavite. It is called Ciento Quinse because it has 115 chillies added to an array of ingredients that include crabs, shrimps, mussels, one whole unripe jackfruit and coconut milk.

Meanwhile the Pancit Langlang of Imus, Cavite, is made of sotanghon noodles, chicken meat and eggs, quail eggs, shrimps and vegetables.

Jose Rizal even mentioned it in his novel “El Filibusterismo,” describing it as “the best soup made from mushroom, shrimp, eggs, sotanghon, chicken” and other ingredients.

Warik-warik is similar to Pampanga’s sisig and Ilocos’ dinakdakan, with an interesting twist. Carangian related that during pre-colonial times, as well as the Spanish period, the Tinguian tribe (and other tribes from the north) prepared Warik-warik as part of a ritual invoking the wisdom of the gods.

Before cooking, the Tinguian would open the pig’s stomach, interpret the alignment of its entrails, and ask for guidance from an anito or ancestral god.

Warik-warik is liempo and choice offal, infused with ginger and other aromatics, along with liver spread that adds a nouvelle touch to the ancient, communal meal.

The conversation with Carangian took many twists and turns.

I learned that root crops were food for the encanto or nature spirits, whose favorite is Kinampay—a variety of ube and the most famous among Bohol’s root crops.

Carangian said that, as folklore dictates, the preferred person to plant kinampay is a young, beautiful, well-endowed naked woman in squat position, chanting, during a full moon.

It is believed that planting kinampay as instructed brings luck to the planter.

Once harvested, the crop should be handled with utmost care, never to be dropped. But if it drops, the one who dropped it must pick the kinampay up, hug and kiss it, in full view of other people in order to appease the spirits.

All of these heritage dishes and more are available at Diamond Hotel this June, with Carangian himself at the helm.

Aside from Ciento Quince, Langlang and Warik-warik, a special feature is the Malolos Congress Dinner of 1898, a recreation of the menu made for the delegates who drafted the Philippine Constitution.

Here’s the recipe for Ciento Quince.

Boil jackfruit until tender then set aside. Saute garlic ginger and onion.

Add pork and cook until tender. Season with patis and add half of the green chilies.

Pour coco milk and simmer until liquid is reduced to half. Add crabs and remaining green chilies including labuyo. Add coco cream.

If langka is not available, kangkong is used as replacement.