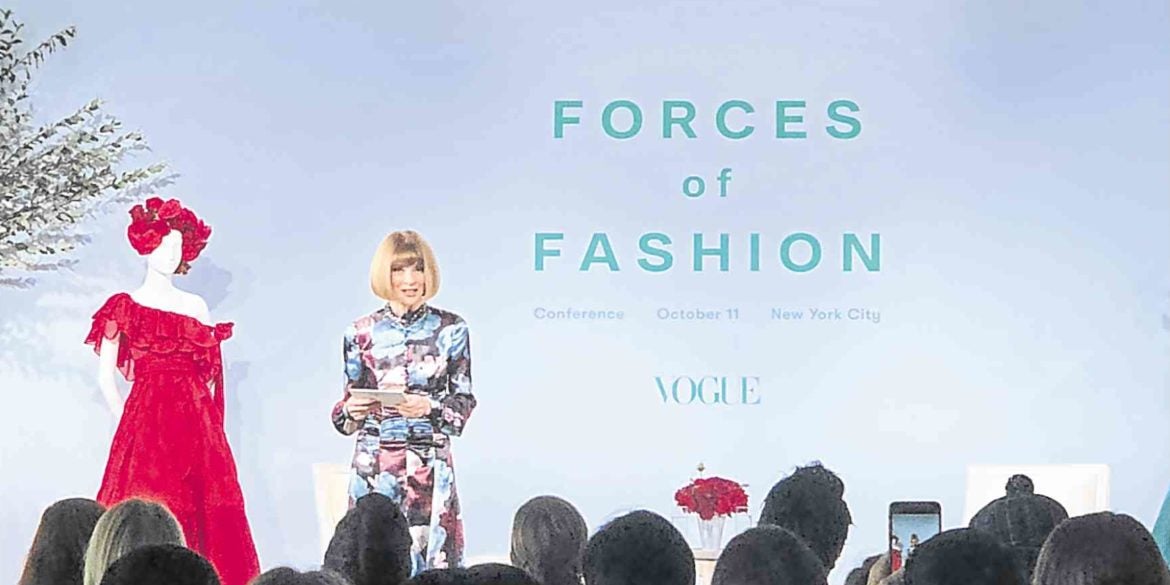 NEW YORK—Let’s get one thing straight: I enjoy sleeping. Yet I’ve lost several nights’ worth of a good night’s sleep for a single project, puzzling out how the laser printers at the Parsons Making Center work, only to be critiqued by an audience of professional artists and creatives.

I guess it’s safe to say that I find solace in my siestas and deep slumbers—away from the adversities of being in a design school. To savor the splendor of my harmonious, twin-sized, dorm room bed on a chilly fall morning is something I would never give up for anything.

But—when Anna Wintour gives you a 6 a.m. call time to attend the Vogue Forces of Fashion Conference, you jump out of bed.

The 2018 Forces of Fashion Conference focused on the forces of change—be it entrepreneurs, designers and artists disrupting traditional practices, formulating design solutions, and promoting versatility and transparency.

I was one of 50 New York-based fashion students to attend the conference.

Though held at Milk Studios, a 15-minute walk from my building in Manhattan, I made the careful yet seemingly irrational decision to book a $15 Uber ride to be as punctual as possible. After all, it was Vogue.

The room was filled with high-profile fashion figures by the likes of: museum curator Andrew Bolton (who was recently commended for the 2018 Heavenly Bodies exhibit at the Metropolitan Museum of Art); legendary photographer Annie Leibovitz; and even momager and matriarch of the Kardashian-Jenner clan Kris Jenner.

Speakers such as Valentino’s Pierpaolo Piccioli and Givenchy’s Claire Waight Keller discussed their vision for the future of the couture houses.

Piccioli, asked about the future of Valentino, simply said: “It’s very important to be a couture house, but it has to be relevant for today—not to live in the past. My issue is to get the house keeping the values of couture, but I want a brand alive and not dusty.”

Keller, being the first female designer and now artistic director of Givenchy, spoke of how being a mother of three working in a cutthroat, fast-faced industry once dominated by men is “empowering and viable for all women.”

However, of the 15 speakers who spoke about their experiences and visions of the future, Wintour, with her short yet enlightening speech, astonished me the most as she righteously projected herself as a purveyor of progress—pioneering a forward-thinking mindset in a haughty industry known to preserve traditions.

At exactly 7 a.m., attendees were told to find their seats. From the corner of the room, Wintour herself stunned me. In a red-and-blue silk dress, a chic bob, wearing the highly controversial yet emblematic Chanel sunglasses on a rather gloomy day in the city, was Madame Anna Wintour—as poised as she was portrayed in “The Devil Wears Prada.”

The editor in chief of Vogue and creative director of Condé Nast began the program welcoming attendees to the second Vogue Forces of Fashion Conference.

She spoke about her experience in the ever-changing world of fashion, and how her position at the helm of Vogue instigated change in the industry.

Wintour recalled her first Vogue cover, in November 1988 as editor in chief, that made heads roll and question her leadership: an Israeli model wearing a pair of blue denim jeans. Not as controversial as we think, so to speak.

Since 1892, Vogue has embodied grace and polished beauty, the epitome of femininity and class. Models on the cover were dressed and photographed in haute couture by the likes of Cristóbal Balenciaga and Yves Saint Laurent.

But Wintour wanted something new, a cover that broke traditional high-fashion norms—casual, straightforward and unceremonious, yet bold enough to make a statement.

From then on, more and more readers developed an interest in Vogue as the covers exemplified the reality and playfulness of fashion, opposing its eminent grandeur.

Later on, she would put actresses, talk-show hosts, and powerful women in politics on the cover, breaking yet another tradition of the professional model as the exclusive face of Vogue.

With the majority of the audience coming from today’s generation that has been frowned upon, Wintour encouraged young aspiring writers, designers, artists and entrepreneurs to continuously embrace transitions.

Having to witness the rise of a digital era that is in constant flux, Wintour noted how the millennials and the Gen Zers adapt to change effortlessly. People have become more culturally competent, environmentally conscious, and politically aware of the things that affect our society.

As she stepped off the platform, Wintour left her young audience an invaluable encouragement. The world of fashion is erratic, and even after 30 years at the helm of Vogue, Wintour never ceases to shake the industry with her instinct and eye for the unconventional and the innovative.