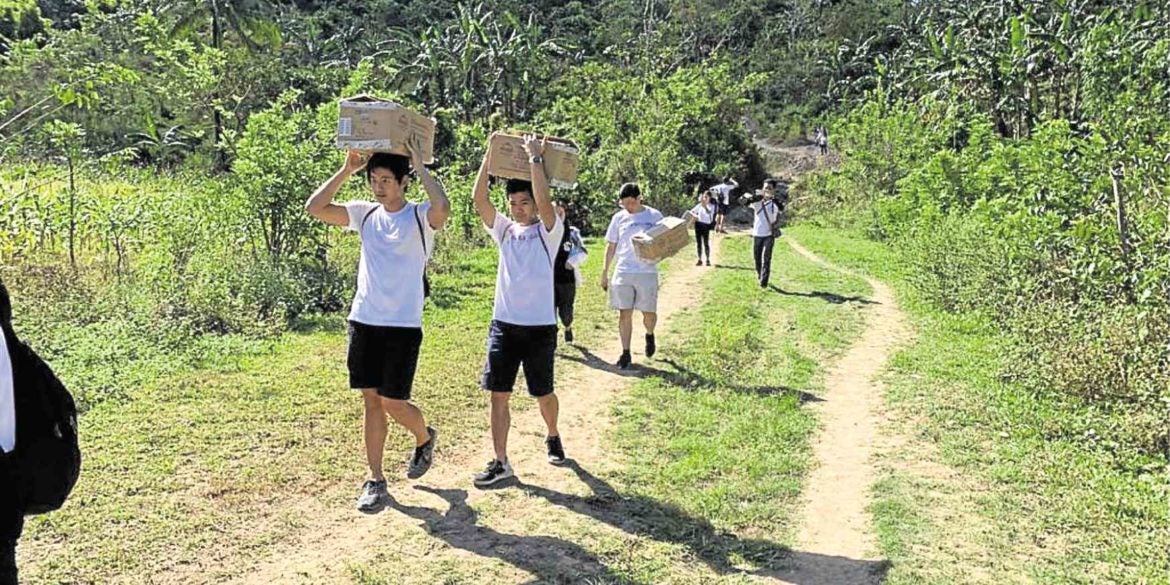 Student volunteers of One Million Lights carry boxes of solar lights on a 4.5-kilometer trek to an off-grid community in Rizal.

When brightening up a room is as simple as flicking on a switch, it’s easy to take the lights in our home for granted.

Founded in California and brought to the Philippines by OML Filipino volunteer Mark Lozano, the nationally awarded, youth-led nonprofit organization helps improve the lives of communities in impoverished, off-grid and disaster-stricken areas around the country by providing them with clean, safe and accessible solar-powered lights.

“Before that first distribution, I didn’t realize that lack of light and electricity was such a prevalent issue,” says Limcaoco, a grade 11 student at the International School Manila (ISM). “The trip to Rizal opened my eyes to the benefits lighting brings to communities. Lighting improves all aspects of one’s life, including education, productivity, income and social relationships.

“It also made me aware of how lack of lighting can affect communities, as it prevents them from maximizing their potential in all aspects of their lives.

“I was excited by the prospect of One Million Lights because it brings a simple but effective solution to communities, that uplifts their lives exponentially; it addresses a social issue that many youth organizations frequently overlook.”

Solar-powered lights, at the very least, reduce the incidence of fires, as one beneficiary told Limcaoco during a distribution in April 2018.

“A kerosene lamp in their small home was accidentally tipped over by a child, causing half their home to burn,” she says. “She was grateful for the solar-powered light because it removes this risk.”

So inspired was Limcaoco by the impact of solar-powered lighting that she and schoolmate Lorenzo Yao-Bate formed a youth team of 10 equally passionate and dedicated ISM students that organizes its own light distributions and fund-raisers.

Since coming together in 2017, OML PH’s Youth Branch has distributed solar-powered lights to 70 families in Pundaquit, Zambales, in April 2018, and trekked two hours up Mt. Puro, Rizal, to deliver lights to 50 households.

A distribution event in Isla Verde, Batangas, with OML PH in 2017 proved a learning experience for Limcaoco and Yao-Bate, who saw how fellow volunteers coordinated with communities.

Today, Yao-Bate is in charge of planning distribution programs with OML PH, while Limcaoco conceptualizes and manages fundraising efforts.

Like all worthy causes, this one is not without its challenges. To organize the November 2018 musical concert fund-raiser “Illuminate,” the Youth Branch’s teenage volunteers looked for sponsors for a venue, food and prizes. They also made sure student performers showed up for rehearsals.

“The event was very challenging to organize, but in the end, we were able to execute it successfully!” says Limcaoco.

“When struggling with an issue, what keeps me going is the notion of ‘high risk, high reward.’ The concert was undoubtedly a lofty project, but it resulted in enough money for 3-4 distributions that will uplift the lives of over 350 people.

“Sometimes projects and ideas may seem daunting, but to us, that is an indication that their results will be all the more rewarding for our community beneficiaries.”

Such a mind-set explains why Limcaoco dares to aim high. “My main hope for One Million Lights is to extend from solar lights to complete electrification,” she declares.

“Solar lighting already improves the quality of life, but if One Million Lights is able to implement solar microgrids in communities, the solar solution will be more long-lasting, sustainable and effective.”

Like the many families she and her fellow volunteers have helped through this advocacy, Limcaoco has benefited, too, from the life-changing effects of solar-powered lights.

“I realize I can make an impact outside my world, and this impact can be even greater if I choose to challenge myself for the benefit of others,” she says. “Morally, I’ve been humbled by seeing homes without light—it is a thing that is easily overlooked, especially in Manila, where people take standard lighting for granted. Intrinsically, I’ve learned that I am someone who desires to be taken seriously for what I believe in. Though I am young, I realize that my ideas do matter and I should speak up about them in a mature and professional way.” —CONTRIBUTED