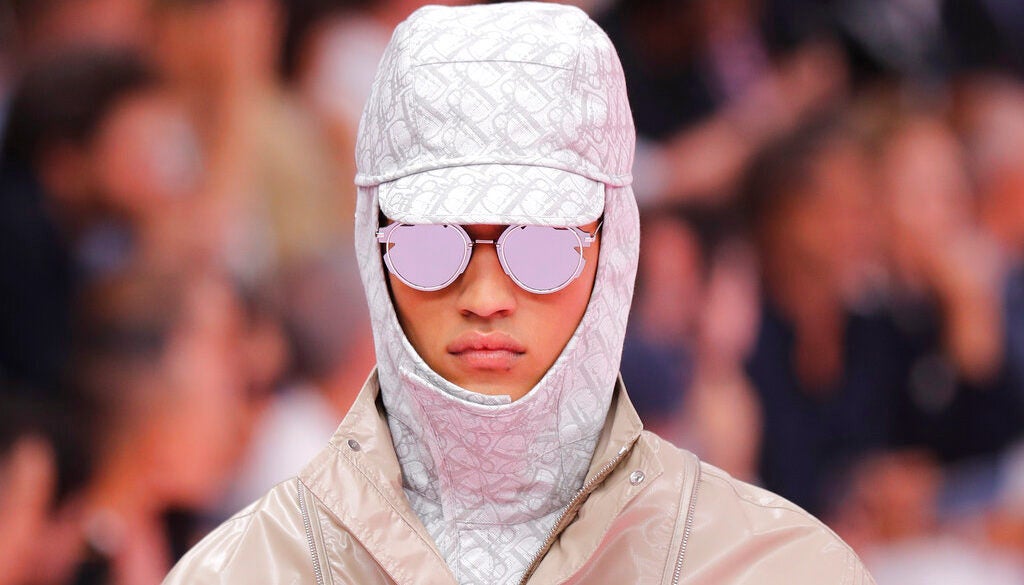 Guests including Kate Moss, Christina Ricci and Kelly Osbourne marveled at the giant artwork by American artist Daniel Arsham that spelled out “DIOR” in broken up plaster with jewels surreally glimmering beneath.

Here are some highlights of spring-summer 2020 menswear shows.

DIOR’S GOES BACK TO PAST

“It’s quite incredible,” exclaimed Osbourne. “The artist puts real crystals inside his work.”

The metaphor of the jewel hidden inside the sculptures provided Dior Man with its theme: Beauty unearthed from the past.

It was the starting point of a collection that went back to the past of Christian Dior, who revolutionized the global fashion industry after World War II with his sculpted, couture styles. These were evoked throughout the 49 looks.

Softly sculpted suits — single and double-breasted, and in pale shades — sported long contrasting silken strips that cleverly evoked the shading of the real sculptures on the runway.

Stiff, sanitized coats that were A-line and in white, meanwhile, referenced the house’s popular saddle bag by using the item’s curves here as storm flaps.

The overly-referential designs are a frequent downside for Dior — but Jones ensured he didn’t lose his own identity.

Indeed, the collection’s strongest looks — like a simple T-shirt with a whoosh of blue watercolor on one shoulder — looked just like Jones exploring his own artistic self.

The scent of flowers that seemed to float into Berluti’s venue — the resplendent Luxembourg Gardens — was so intoxicating it had fashion insiders guessing that the perfume was, in reality, artificial.

The show itself by designer Kris Van Assche, which seemed inspired by the bright colors of a tropical forest, had a similar problem.

There is courage in putting men in bright hues — a point which should be duly credited to the Belgian who’s been at the helm of the Berluti house one year.

He’s certainly succeeded in bringing a new aesthetic to the storied 19th-century brand, a former Italian shoemaker, since arriving from Dior.

But the yellow citrines, vivid blues, electric oranges and electric reds that were chosen for the spring-summer looks were so eye-poppingly industrial they seemed to distract from all else.

And instead of being broken up with more neutral colors, for instance, or used sparingly, they were sometimes splashed across “total look” ensembles. It looked rather heavy-handed.

Still, the show had some great one-off moments — including one from model, Gigi Hadid, who closed the show in a verdigris pant-look speckled with matching diaphanous embroidered feathers.

The art of the chic invite is still very much a staple of Paris fashion.

Houses compete to produce the most eye-catching, inventive and flamboyant show invitations delivered often by gas-guzzling courier to each guest’s personal or professional address with little thought for ecology.

The little works of art sometimes provide a hint as to what the collection has in store. Often, they are just plain wacky.

The edgy it-brand Vetements sent out an actual condom in a plastic packet that some fashionistas opened in the belief their seating placing was contained inside. They were wrong.

While, the house of Berluti sent out a chunky wooden block, as was historically used in the construction of classic footwear, with their show details on top.

They were all used like a puzzle across the 40 looks in varying rates and intervals. It produced a diverse, yet coherent, series of variations — or modulations — on a theme that worked well.

Juun J.’s go-to color palette of black, white and khaki began the show — moving into some space-age sheens of silver and pink that were on female models. Their billowing skirts seemed to melt down the body, artistically.

Shimmer, sparkle, stripes in the intoxicating style of the ’80s — that was the essence of designer Olivier Rousteing’s spring collection for Balmain that didn’t break any mold. And why should it?

This season, he loosened the silhouette and put on a fashion show with dramatic black and white stripes as well as all-out looks comprising embroidered mirrored pallettes and dazzling silver space pants.

To say that this collection didn’t tread much out of Rousteing’s comfort zone demonstrates how totally he has redefined the aesthetic and reputation of the age-old Parisian house founded in 1945 by icon Pierre Balmain, a contemporary of Christian Dior.

For the final moments of sunshine on the longest day of the year, it will take place outdoors and will be followed by musical performances, kicked off by Gesaffelstein.

Earlier in the month, 1,500 free tickets to the event were available, free of charge. Designer Olivier Rousteing said it was his way of “democratizing” fashion. Money is being raised for (RED), a charity that helps fight AIDS.