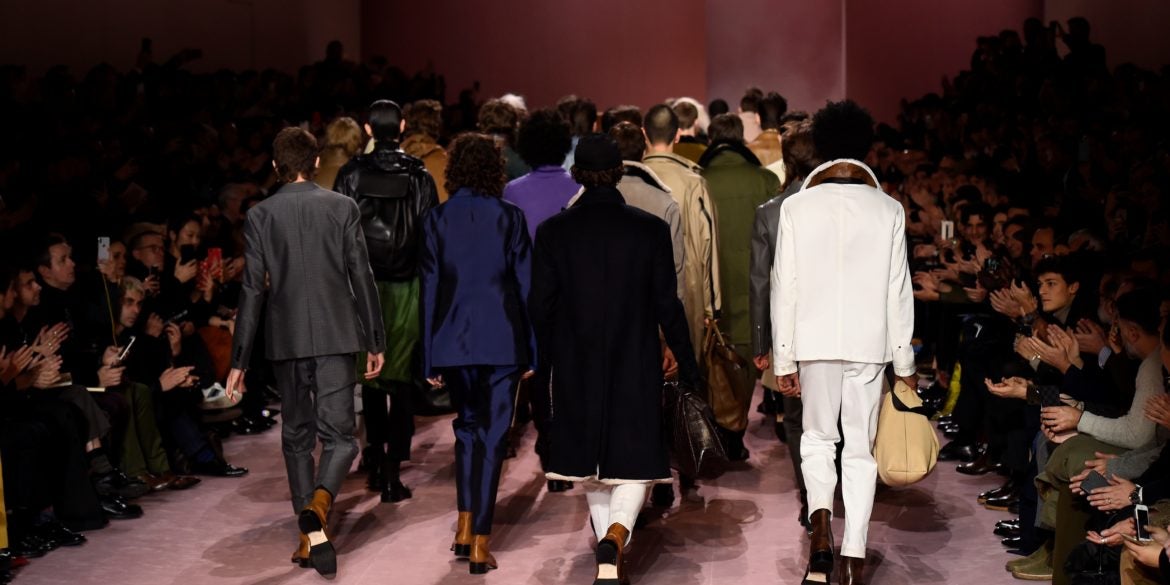 Dior and Berluti top the class on Paris catwalk

Two of fashion’s most gifted menswear designers gave a masterclass in tailoring on the Paris catwalk Friday.

Kim Jones showed why sales have shot up at Dior since he took over last year by hitting all the streetwear sweet spots while reinforcing the label’s reputation for effortless elegance.

Kris van Assche, his Dior Homme predecessor who moved on to revamp Berluti, produced a sharp and richly coloured spring summer collection with a co-ed twist.

Both had trousers worn longer than they have been for a few years, and paid homage to the suit, boot, shirt trinity of classic tailoring. But there all similarities ended.

While the Belgian turned up the colour volume, Jones bleeds it out to the bare minimum of bleached-out Dior egg-shell blues, pinks and silvery greys.

With an all-white replica of the brand founder Christian Dior’s office nestling in one corner of the vast set like a marbled relic of classical Greece, Jones went on an archaeological expedition through its archives to find the key to unlock the house’s fashion future.

Along the way Jones turned up some interesting and amusing artefacts of possible space age luxury such as a metallic Rimowa case that doubles as champagne cooler.

The designer conceived the set with American artist Daniel Arsham — who Jones said  “looks at the present from the future” — with Dior written out in huge crushed stone letters.

But it was the clothes that made the real statement before a starry front row that included Kate Moss, Lilly Allen, Kelly Osbourne and no shortage of celebrity subplots, with Columbian reggaeton star J. Balvin seemingly confirming his romance with former Miss Argentina Valentina Ferrer.

With the colour so subtly muted everything was in the sculptural cut.

That also left room for a run of laboriously handmade deep blue and orange plisse shirts to do their magic.

Classic blue toile de Jouy pattern shirts and see-through news print variants were also given plenty of room to breath, matched with transparent rubber boots through which Jones had run with a new line of Dior socks.

“A lot of us in the studio are really obsessed by footwear,” Jones told AFP, and the idea that “you can dress head to toe in Dior.”

It takes a killer cut to get away with that kind of colour and the Belgian master upped the ante by lopping the sleeves off several of his suits and town coats for summer, as well as slitting the pencil trousers at the ankle.

With singer Ricky Martin in the front row, the Belgian sent sleek silver-fox older and female models in to mix it up on the catwalk with young bucks in Berluti brown leather suits.

Van Assche saved his big statement for the end with Gigi Hadid in a glorious mint green sleeveless double-breasted suit streaming with picked out marabou feathers.

“It’s a challenge for me reinventing myself and the DNA (of the brand),” he told reporters after the show.

“I refuse to think Berluti should always be about the timeless luxury. It is also supposed to be for now,” he added.