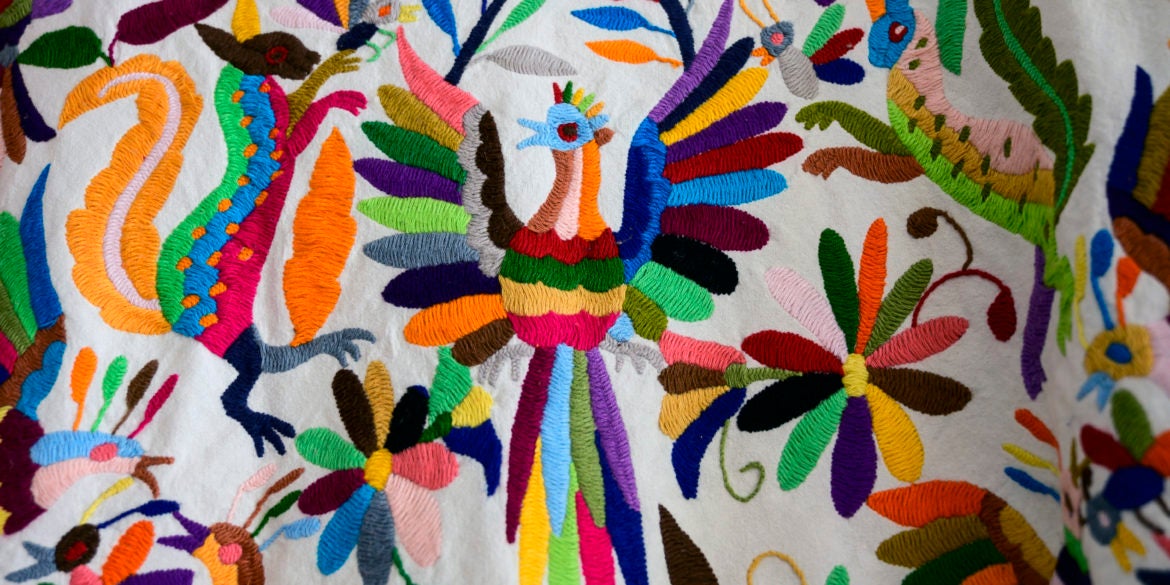 Detail of a piece by Mexican artisan Glafira Candelaria Jose, of the Otomi ethnic group, on display at her workshop in San Nicolas Village, in Tenango de Doria, Hidalgo state, Mexico, on June 18, 2019. - The Mexican government asked famous Venezuelan designer Carolina Herrera to explain her decision to use textile designs from three Mexican indigenous communities in six pieces of her Resort 2020 collection. (Photo by Pedro PARDO / AFP)

It’s the dress in “Look 23” of the Resort 2020 collection that particularly infuriates Candelaria, because its bright pattern of animal and floral designs look exactly like the prints covering the walls of her workshop, which her mother and grandmother first created decades ago.

Yet the Mexican government has accused the designer of “cultural appropriation,” and 59-year-old Candelaria, who lives in the small central Mexico mountain village of San Nicolas, views it as a blatant rip-off of her traditional wares.

“They’re just copying our work. It’s not right,” the indigenous Otomi woman said in stilted Spanish at her home.

Her poor, rural municipality of Tenango de Doria is the namesake for the intricate and painstaking Tenango embroidery technique, one of several native traditions Gordon used in his collection.

“Outsiders are getting rich using our work,” she said. “These people could be sued. They should at least apologize.”

Candelaria’s bright textiles sell for about $65 for a table runner, which takes her six months to make, and $250 for a full table cloth, which takes around a year and a half.

American designer Gordon, 32, took over from Carolina Herrera’s eponymous founder a year ago after the legendary Venezuelan fashionista stepped down at age 79.

The Mexican government has been less impressed.

Culture Minister Alejandra Frausto sent Gordon and Herrera a letter calling on them to publicly explain “on what basis (they) decided to make use of cultural elements whose origins are clearly documented, and how the profits of that use will go to benefit the community.”

She called for a “broad discussion of the cultural rights of indigenous peoples,” and said Mexico would consider legal action after consulting with the communities whose designs were used.

In addition to the Tenango design, she accused the label of “appropriating” embroidery from the isthmus of Tehuantepec, in southern Mexico, and the country’s vibrant “Saltillo” ponchos.

“The presence of Mexico is indisputable in this collection,” Gordon replied in a statement, saying his aim was to “pay tribute to the richness of Mexican culture.”

He is not the first designer to land in hot water with the Mexican authorities.

The government has sent similar letters to Zara, Mango, Louis Vuitton and other firms over the years.

Mexico could potentially pursue legal action in such cases, according to experts.

The International Declaration of Human Rights recognizes intellectual property as a fundamental right, and Mexican copyright law extends protections to artisanal works, as well as a requirement to clearly credit indigenous communities if their traditional designs are used in new products.

Carolina Herrera “may have committed an infraction of trade law by neglecting to give credit to the ethnic communities in question,” copyright law expert Dafne Mendez told AFP.

‘They should come to us’

Behind Candelaria’s house is a single, small room with a dirt floor where her mother, Josefina Jose Tavera, lives.

Her sight is now too poor for embroidering, so Tavera spends her days in the mountains gathering leaves used in indigenous “temazcal,” or sweat lodge, ceremonies and hauling them back to the village in a large pack tied around her forehead, as is traditional.

She is indignant when she hears her pattern was used by a major fashion label without credit.

“If it weren’t for my hands, this work wouldn’t exist!” she said in the Otomi language, her face creased with anger.

Fashion labels that want to use the Tenango technique “should come to us,” said 29-year-old Oliver Lopez, who runs his own small design shop out of his home.

“They should bring us jobs,” added Lopez, who has also incorporated the village’s traditional designs into modern-looking mini-dresses — though with less commercial success than Carolina Herrera.