A last night with Eddie Garcia and Lilibeth | Inquirer Lifestyle 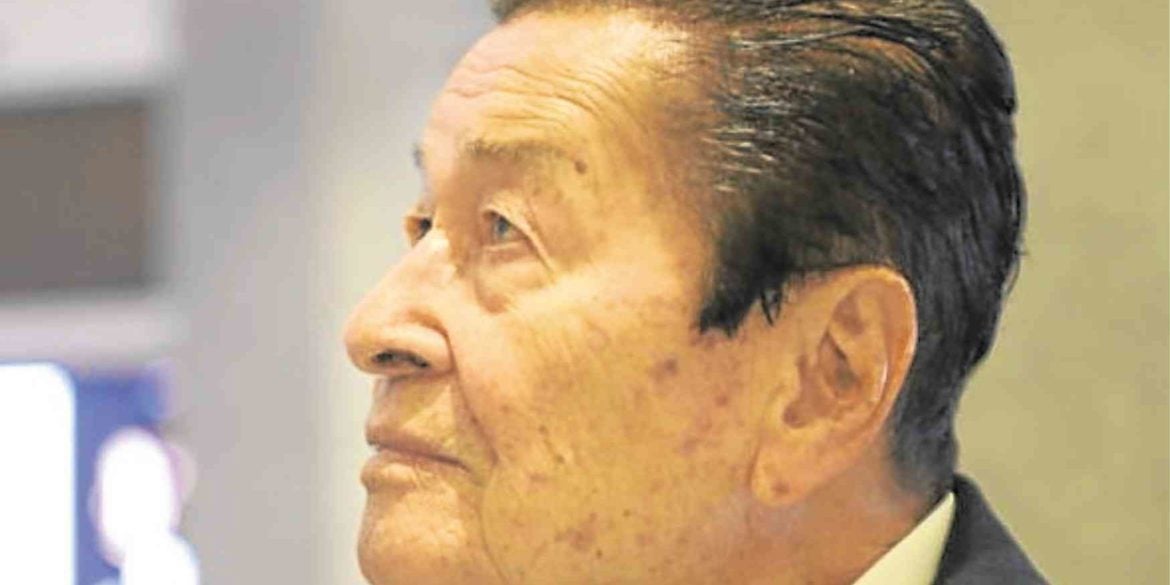 Eddie Garcia in 2015 at the launch of the Bench Love Local book: A Filipino icon —miguel pastor

A last night with Eddie Garcia and Lilibeth

A tear must have fallen from out of the corner of Eddie’s eye, even as his eyes remained shut

Life is gone in a gasp. Always give in to the urge to see someone. I’m glad I did Wednesday early evening.

After we were done with the Lifestyle pages, I decided to go to Makati Medical Center and visit my longtime friend Olive Lilibeth Lagman Romero and her partner of more than 30 years, Eddie Garcia.

In the wee hours the day before, Olive—Lilibeth, as she is called by family and now by the public, but still Olive to us, her former grade school classmates—texted me if Eddie could indeed hear her. I had asked her to keep talking to him in his deep coma, like we did to my mother who was also in deep coma six years ago before she died. “What, he can hear me? I pray he reacts even for once,” she texted.

“It’s been almost 12 days,” she added. Anyone could read a woman’s helplessness in that.

Since Eddie suffered a what-would-be-fatal injury more than a week ago, Olive had barely left his side at the ICU, talking to him and playing his favorite songs like “Green Fields” by the Brothers Four (Once there were greenfields, Kissed by the sun, Once there were valleys, Where rivers used to run…).

When I texted her to get some sleep, she replied, “Just coping like a robot, no sleep, but must be physically, emotionally, mentally and spiritually fit. For the love, kaya ko…”

So that Wednesday night, we walked into the ICU room, with Olive, the family’s friend and leading writer and actress Bibeth Orteza and three other visitors.

Olive, in her signature lively voice, called out to Eddie, raised his arm and held his hand tight, telling him that he had guests, people who loved him. Olive ticked off our names, tagging mine as “from St. Theresa’s, remember, we’d see her at Mass sa Bene?”

She would not let go of Eddie’s hand that held the rosary she had placed days before, then she said, touching his face: “May luha.” Indeed a tear must have fallen from out of the corner of Eddie’s eye, even as his eyes remained shut.

Eddie’s body was still, his hands a bit swollen and losing the color of life. To us gathered around the bed, Olive recounted the tragic day of the taping in Tondo and its aftermath, how she frantically got a specially equipped ambulance from Makati Med to move Eddie from Mary Johnston to the Makati hospital before the break of dawn, where his doctors stood waiting.

The talk veered to how she and Eddie would have check-ups every three months—that was how health-oriented the actor was. The sense of irony wasn’t lost on us at all.

Olive must have recounted this and other stories many times to Eddie’s many visitors the past week, yet she would do again that night, being the raconteur she is, this time the storytelling a coping mechanism of a person in pain.

Depending on her recollections, the mood in the room that night would swing from heavy to light. “Ang lechon for our homecoming, Eddie,” she reminded Eddie of his commitment to provide the lechon for Olive’s jubilarian class at the St. Theresa’s homecoming in January 2020, as if that long-term promise were enough to revive this kind, caring man. Olive recalled how recently, Eddie overheard her discussing on the phone with her former classmates the details of the homecoming and the plan to have a lechon. That was when Eddie said he’d take care of the lechon.

While Olive had understood that the end was inevitable and the need to let go, the mind couldn’t dictate on the heart.

The hospital staff had noted how Eddie’s vital signs would ebb when Olive was upstairs in her room, but would perk right up the moment she went down again to ICU.

That Wednesday night, after some time in ICU, her sisters and her son Nikki, visiting with his two children, were able to talk Olive into getting some rest in the private room.

There, all by ourselves, I glanced at the Best Actor Award trophy from the 42nd Gawad Urian that Eddie had been given just the previous night for the movie, “ML” (Martial Law). It was placed above the hospital bed in Olive’s room, and in a nearby corner propped against the wall was the framed poster of Eddie’s portrait in “ML.” Both had been delivered to Olive in the hospital after the awards night.

That night, our freewheeling chat in her room must have given Olive a much-needed break. We talked about life then and now—our grade school days, when we were seatmates and about how our shared suffering in Algebra, Geometry and remedial classes bound us, how decades ago, people were skeptical about her and Eddie, but then, the partnership became one fulfilling lifetime. “My soulmate,” she had described him.

The couple are opposites: Olive, who’s decades younger than Eddie and was into interior design, is very outgoing and sociable; Eddie, an icon of Philippine entertainment and culture, was taciturn, his quiet demeanor a glaring contrast against the noise of fame.

Through the years, Olive and I have kept in touch simply because we’d run regularly into each other at Sunday Mass at the San Beda Chapel in Alabang, Muntinlupa.

She and Eddie would occupy the aisle pew, in the middle row, not too close to the altar and not too far back—she glamorously made up and chic even on a weekend, he so casual and simple in his plaid polo shirt and khaki slacks.

Perhaps the public didn’t know how God-centered Eddie was. He hardly missed Sunday Mass, as far as we noticed even then. Sometimes when Olive was out on a trip, he’d be in the Mass alone, coming in on time and quietly walking away after the Mass.

Last Sunday at Mass, we threw a glance at that aisle pew and realized it wouldn’t seat an Eddie Garcia again.

Usually after Mass, Olive and I would chat—endlessly, if you know what I mean, as Eddie stood by patiently. That was how my octogenarian mom—his fan—and my sons met the movie legend. Mass-goers would sometimes ask to have their photos taken with him, especially the balikbayan, and he would oblige. He was like a “balikbayan destination,” Olive and I would say, laughing.

One Sunday evening, a long time ago, after Mass, he and Olive took me and my sons out to dinner in the mall. My sons, who weren’t that familiar with his movies, wondered why people would stop this self-effacing man for selfies. Because he’s a big star, I would remind them—for 70 years, we’d learn now.

At that dinner, Eddie hardly butted in in the conversation of two ex-schoolmates. He was a contented listener. Among the few personal things I learned about him that night was that Erap was really his close friend.

The other night at ICU, Bibeth, with obvious sadness, told us how Eddie was a fine gentleman. You never heard him talk about the personal lives of his friends, Bibeth and Olive would agree.

Last Wednesday, it was almost midnight when I and her sisters said goodbye to Olive who, again, was sleeping over in the hospital. She took the elevator down with us, but got off in the ICU floor. She was headed for Eddie’s bedside again.

However, the next day, Thursday, Eddie finally moved on.