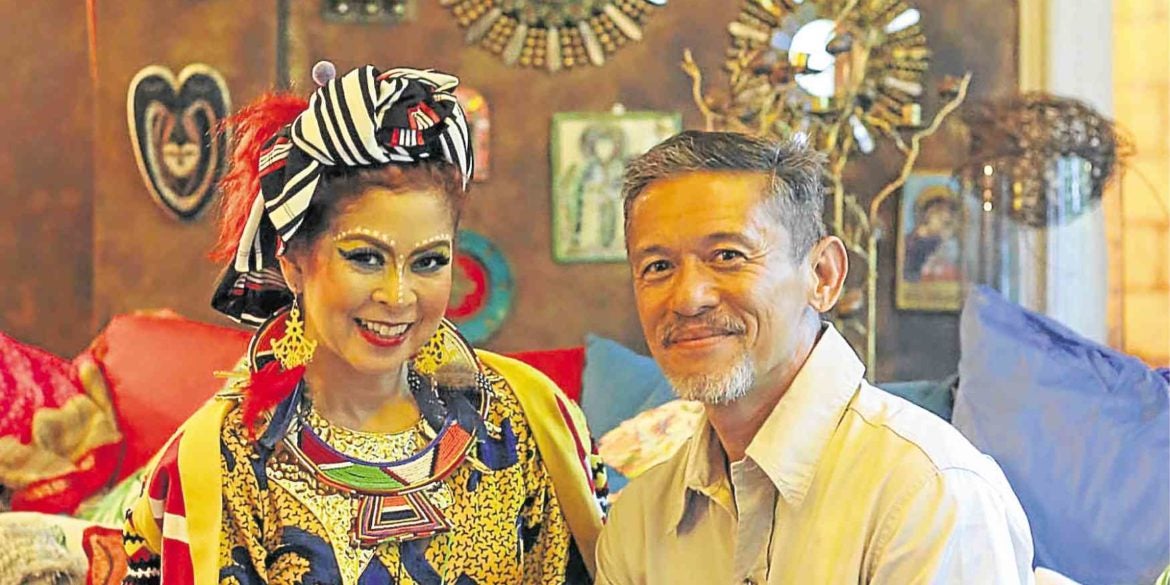 As they celebrate their 25th anniversary tomorrow, the famous couple talk about an enduring, exciting marriage

Theirs was a whirlwind romance, except he turned out to be the romantic, and she the whirlwind.

On paper, it shouldn’t have worked: she the wild child scion, the “life-is-a-cabaret” party girl; he the straight-laced corporate guy with a Kellogg MBA who exuded managerial gravitas.

And yet, tomorrow Tessa Prieto and Dennis Valdes will celebrate 25 years of marriage, and it seems they’ve never been happier.

As it turns out, it’s the same as in any successful relationship: have endless patience with each other, leave plenty of room for fun, and—surprise—keep to some good old family values.

“It takes two people in every relationship,” says Tessa, best known as an events host, Inquirer Lifestyle columnist and the life of every party she attends.

“It might seem that he’s the one making sure the relationship lasts, but I do my share, too,” she adds. “It’s really a constant balance. You’ve got to keep working at it.”

“We give each other the space to do what we need to be doing, then we go back to the home where we’re both very grounded,” says Dennis, the president of PhilWeb Corp., the electronic gaming company.

Home is the “Sea Princess Palace” (named after Tessa’s alter ego), the Mediterranean-inspired villa the couple designed together early in their marriage.

From the outside it exudes an Old Hollywood vibe, kind of like Norma Desmond’s house in “Sunset Boulevard.” Inside, however, it’s as one might imagine from Tessa’s outsized personality, outré sense of style, and penchant for everyday cosplay.

One might describe the décor as “crazy quilt”: armchairs draped with furs, brocades and wild tribal weaves, walls and vaulted ceilings painted with murals, and enough sequins and feather headdresses to mount a high-kicking Las Vegas revue.

There’s a Charlie Co painting, an Ed Castrillo bronze, and a wall-size black-and-white portrait of the mistress of the house. Designer luggage, African masks, a baby grand piano—there’s enough stuff in here to give Marie Kondo a seizure.

“Everything sparks joy!” says Tessa, an interior designer herself. “Take it as I am, this is me!”

“It shows you how different Tessa and I are,” says Dennis. “When I drew out the layout for the house, it was all straight lines and rectangles. Tessa said ‘I like your layout’ and proceeded to draw on it. Now there are very few straight lines inside the house.”

“We really are the perfect example of contrasts, and of how opposites really attract,” Tessa chimes in from the makeup chair in the anteroom.

The initial concept of the Lifestyle shoot was for Tessa to be au naturel (as in, not made up) but that was a nonstarter since she wanted to preview the theme for their silver anniversary party, months in the planning, which is “African safari.”

It all makes sense when you consider that la vida Tessa has become a happy confluence of performance art and brand marketing. As Bob Dylan says in the current Scorsese Netflix documentary: “Life isn’t about finding yourself… life is about creating yourself.”

“What she really wanted to do was entertain people, and she set out to create a persona that was focused on that,” says Dennis.

“When you look at her, you think ‘this woman is pure whimsy,’ and when she talks and entertains, she’s kind of spacy. But the reality is, she’s worked very hard on that persona. It’s almost like a caricature. That’s why there are comedians who dress up in outfits and pretend to be Tessa on TV.”

It’s an ephemeral art, hence the website, the PDI Lifestyle column, the Instagram page, and other ways of documenting it on the wing, as it were.

Behind the scenes—most of the time, anyway—is Dennis. (Occasionally, he is called on to play the Pirate to her Sea Princess in the ongoing saga.)

“Dennis is kind enough and patient enough that I can be who I want to be,” she adds. “I think Dennis came to me as like my stabilizing element. I’ve been like this ever since he met me—I think it’s worse now—and he seemed to me like a constant factor that I could so depend on. [Women] are so much more emotional than guys, and I needed somebody who was just so constant.”

Tessa’s life constantly spills over into Dennis’, just as her wardrobe has overflowed into his closet space.

Tessa already had Bryan, from a previous relationship, when they met. He was followed, at long intervals, by Tyrone in 1995, Annika in 1998, and Athena in 2005.

“If you’re fortunate enough to have kids, they really change the chemistry in any relationship,” says Tessa. “They will make you work harder for the relationship.”

“I’ve realized that because she’s always out, the home needs an anchor,” says Dennis. “I’ve become like the housemother because the kids need someone who will show up when there’s a PTA meeting, someone to have dinner with, to tutor them. I’ve tried to be that anchor.”

“She’s an anchor in a different way,” he hastens to add. “You see somebody who’s very whimsical and arty, but there are facets there that are very solid. You would think somebody so out of this world wouldn’t be quite so religious, but she’s the only person I know who goes to Baclaran every Tuesday night/Wednesday morning as part of her week. And who goes to Mass almost every day, at noon. It’s something that wasn’t there when we first got married.”

They met in an impromptu scuba diving trip to Anilao in February of 1993. It was organized by Tessa’s dive instructor, who also invited her dive instructor: Dennis.

He was working in Hong Kong at the time as the regional marketing manager for a multinational. After the dive, before going back to HK, he invited Tessa to see an Italian opera in HK. She said yes—if he sent her a plane ticket, business class.

The date finally happened six months later, after weeks of telefaxes and overseas phone calls between HK and Manila, this being before cell phones. Of course, Tessa went on a shopping spree on the big day and they missed the opera’s first act.

Something had changed in those six months.

“I had no clue that, in the six months that I didn’t see her, her brother had passed away,” Dennis recalls. “She said, ‘I’ve changed a bit, I’ve become carpe diem—seize the day—because I’ve seen my brother die.’”

“Louie’s passing was sort of instrumental to who I am now,” Tessa reflects. “I wasn’t as flamboyant as I am now. I was super punk, wearing black. I was into grunge and super conscious of what people were saying. And then Louie passes away while he was in his prime, and you realize that life is short, and you’re not really answerable to anyone except God.

“I was a single mom, going out every day and partying—all the bad stuff, I went through that. I could have gone there and continued on. But then, Dennis came, and it changed everything. Priorities in life and what really matters change when there’s a death in the family. You realize, ‘I want to express myself the way I want to be.’”

When Dennis proposed marriage the following year, she said “yes.”

“He wanted our wedding to be Filipiniana, super simple, and I said ‘no way.’ I wanted a medieval theme!”

It’s only escalated from there, and here we are, 25 years later.

The joke is, it’s a good thing Dennis is a scuba diver, because Tessa uses up all the oxygen in the room.

“I cannot so lose my persona that I become a nonentity,” says Dennis. “That would be fatal to the relationship. I need to be able to break out.”

Everyone needs some me-time, and for Dennis, that is reserved for his renewed passion for water sports. Apart from scuba diving, which is more of a family activity since everyone, including the kids, is certified, he’s rekindled a passion for underwater hockey, a sport he used to play in college.

“I’ve become very passionate about it, and joined the Philippine team that went to the World Championships twice. Now I got it in the SEA Games in December.”

Occasionally, Tessa joins him for shorter distances. They’ve also raced triathlons as a team, Dennis doing the swim, Tessa the run, and a third party for the bike.

For some real solitude, he goes windsurfing on weekends.

“When you’re on the board in the water all alone, it gives you time to reflect,” he says. “Windsurfing is all about balance. The moment you get the wind balanced, you’re not exerting effort anymore.”

Of course, there have been some bumps along the way. Things were tense for a while when Dennis was working for Tessa’s family’s business. But that’s all been ironed out and it’s been smooth sailing for the most part.

“You always come back to where you’re centered,” says Dennis. “As long as that center is there and you keep coming back to it, it’s all good.”

“We keep evolving,” says Tessa. “There’s that constant factor of togetherness and family, but there always has to be something new—a trip or travel or an adventure—making every year a milestone. People tell me ‘you’re constantly celebrating.’ It’s because every year for me is like, wow!, there’s something to celebrate.”