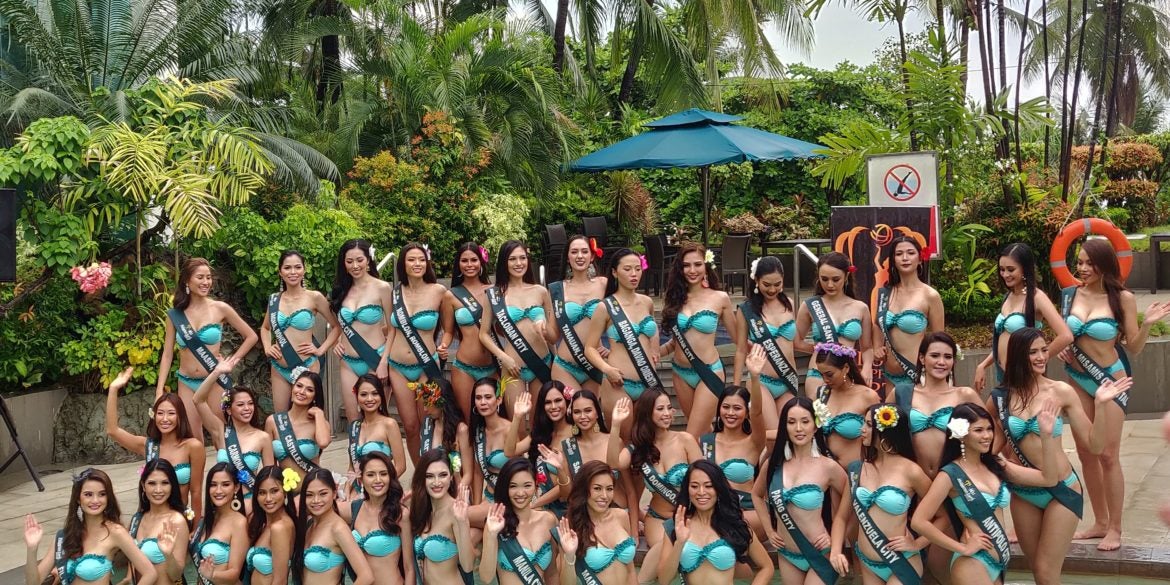 The show must go on for the 40 official delegates of the 2019 Miss Philippines Earth pageant, who gamely braved a sudden downpour Monday, also the feast day for Saint John the Baptist. ARMIN P. ADINA

MANILA, Philippines—Last year, the Miss Philippines Earth pageant decided to change its title to “Miss Earth Philippines” reportedly as a response to a legal rights claim for the name, and to also put emphasis on the “Miss Earth” brand.

“It was really originally Miss Philippines Earth. We own the ‘Miss Philippines’ [title] ,” she told the Inquirer at the sidelines of the 2019 delegates’ press presentation held at the poolside of Diamond Hotel in Manila on Monday morning.

Schuck continued: “Somebody used it last year, and there was a case filed in court. But now, it’s okay so we’re back to ‘Miss Philippines Earth.’”

The organizer also revealed that this year, the pageant will veer away from the traditional evening ceremonies, and will instead hold its finals in the afternoon, “to save on electricity and become more Earth-friendly,” she explained.

The pageant promotes environmental preservation, and its winners are dubbed “Beauties for a Cause.”

The coronation ceremonies will be staged at the Cove at Okada Manila in Parañaque City on July 10, at 3 p.m. The venue’s structure incorporates skylight panels which allow generous amounts of daylight to come in.

It was also the venue for the global Miss Earth pageant’s “Beauty of Face” competition last year, where Schuck noticed the potential of holding a daytime program for a final competition.

“The natural light was so beautiful, and it also made the ladies look even more beautiful,” she said.

This year, the 40 official delegates each represent a flower from their respective towns, cities, or provinces. But nobody was allowed to carry the national flower “sampaguita.”

Schuck explained: “The winner will represent our national flower in Miss Earth. Other countries will also promote the beauty of their respective national flowers, and their benefits to Mother Earth.”

While no venue has been finalized for the global competition, the organizer said a date has already been set.

“What’s final is it will be on Oct. 12. It could be here in Metro Manila, out of town, or out of the country,” Schuck shared.