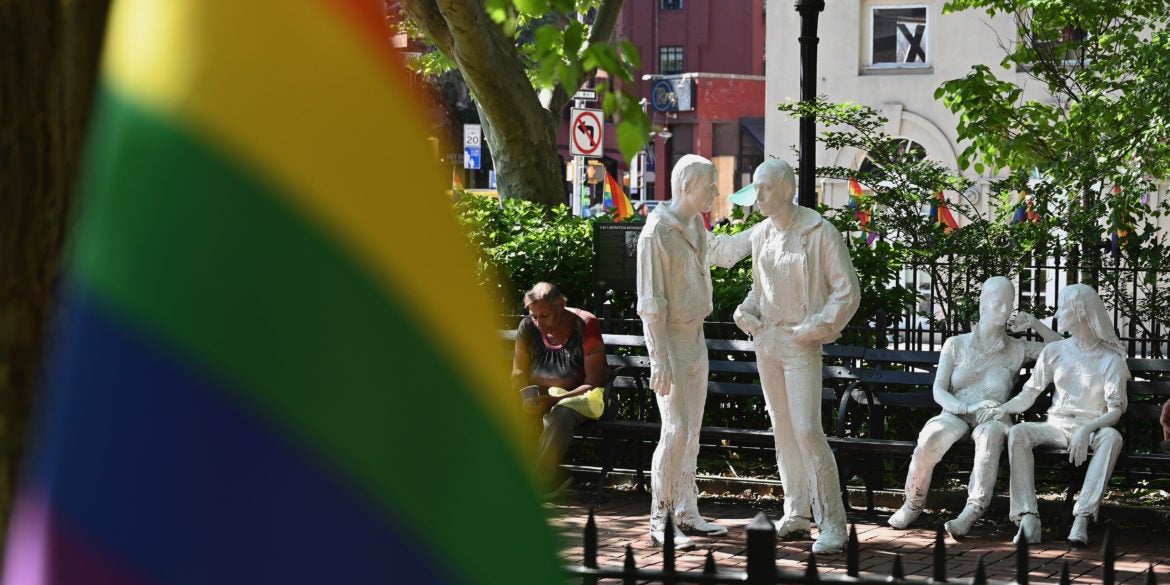 (FILES) In this file photo taken on June 4, 2019, Rainbow flags and sculptures are seen at the Stonewall National Monument, the first LGBTQ national monument, dedicated to the birthplace of modern lesbian, gay, bisexual, transgender, and queer civil rights movement in New York City. - "It was the first time our community imprisoned the police, who until then had always imprisoned us": this is how Mark Segal, veteran of the Stonewall Inn protests, describes the first of six nights of riots that 50 years ago unleashed the gay revolution and changed the lives of millions of people. (Photo by Angela Weiss / AFP)

By: Catherine Triomphe via Agence France-Presse

Four million people and a sea of rainbow flags: that is what organizers of New York’s “World Pride” parade expect this week for events marking the 50th anniversary of the Stonewall riots, which launched the gay rights movement in the United States.

Many want the vast gathering to act as a show of strength for the LGBT community at a time when homophobia is again on the rise in the country.

The six-day festival will feature concerts, exhibitions, movie screenings, theatre shows and workshops as the city pays homage to those who took part in the 1969 Stonewall riots, a week-long protest against the police’s constant harassment of the New York gay community at the time.

Just a year after the riots in June 1970, New York staged its first ever Gay Pride parade celebrating the diversity of the LGBT community, an event that would spread to other cities and eventually around the world, even though homosexuality remains banned and punished in a number of countries.

“What we did was end invisibility. People know who we are now. You can’t try to create myths anymore. They know who we are,” said Mark Segal, 68, who was at the riots outside the Stonewall Inn in 1969.

“They know us. They turn on TV, they see us. They read about us in their newspapers…We’re not invisible anymore. You can’t erase us anymore. That chance ended long ago,” he said.

World Pride 2019 will officially kick off on Wednesday with a benefit concert in Brooklyn hosted by Whoopi Goldberg and featuring Cyndi Lauper and Chaka Khan as headliners.

On Friday, a large crowd will gather outside Greenwich Village’s Stonewall Inn where on June 28, 1969 hundreds of gay and transgender people pushed back against the latest police raid on the establishment, sparking six days of unrest.

The weekend celebrations will feature concerts by Madonna and Grace Jones, with the festivities winding up with a giant World Pride Parade on 5th Avenue. It will be the sixth edition of World Pride, which began in Rome in 2000 and brought together droves of LGBT people from across the world.

New York’s Gay Pride is regularly one of the largest such events globally, but for this year’s milestone anniversary, authorities expect an additional two to three million visitors to attend.

“It’s going to be huge,” said Cathy Renna, spokeswoman for the organizers of the parade, which is renowned for its risque and outlandish costumes.

That means the police will be out in force, protecting a community which saw 49 of its members gunned down in a shooting in the Pulse gay bar in Orlando, Florida three years ago, and fears that prejudice is on the rise.

“Our thinking changed after the Pulse night club attack,” said John Miller of New York’s counter-terrorism police force, who noted the “increasing threat from right-wing extremists who could also have been targeting the LBGTQ community.”

Many in the gay community blame President Donald Trump for fueling extremist sentiment.

A new survey published Monday revealed that the number of Americans aged 18 to 34 who said they are comfortable interacting with LGBT people had dropped to 45 percent in 2018 from 53 percent a year earlier. The number was 63 percent in 2016.

“These numbers are very alarming and signal a looming crisis in discrimination,” the head of the Harris Poll, John Gerzema, told USA Today newspaper.

“It’s even more important to be here in the current political climate,” said Jessica Inserra, 42, a Los Angeles-based comedian celebrating in New York.

If proof was needed that Gay Pride is no longer a small, niche event but a massive draw to the wider public, one needs look no further than the corporations lining up to sponsor it and the celebrities, politicians and members of the police and fire services who are joining the parade.

Some 70 global giants are sponsoring this year’s event, from L’Oreal to Macy’s and Danone to Morgan Stanley, bumping the parade’s budget up to $12 million, spokeswoman Cathy Renna said.

But to some activists the whole event is bloated, and a far cry from the original rebellious spirit of the early Gay Prides.

They are organizing a rival parade, dubbed the Queer Liberation March, which is stripped of celebrities and sponsors and expected to draw tens of thousands of participants.

“Pride is not for sale,” said Bill Dobbs, one of the alternative march’s organizers. “It has lost its direction.”

Renna, however, said the sheer size of the festival showed how far the movement has come.

“I don’t long for the battle days when there were 5,000 people marching and we could get beat up,” she said.

“The fact that four million people are going to show up is, to me, one of the most powerful statements we could make.”