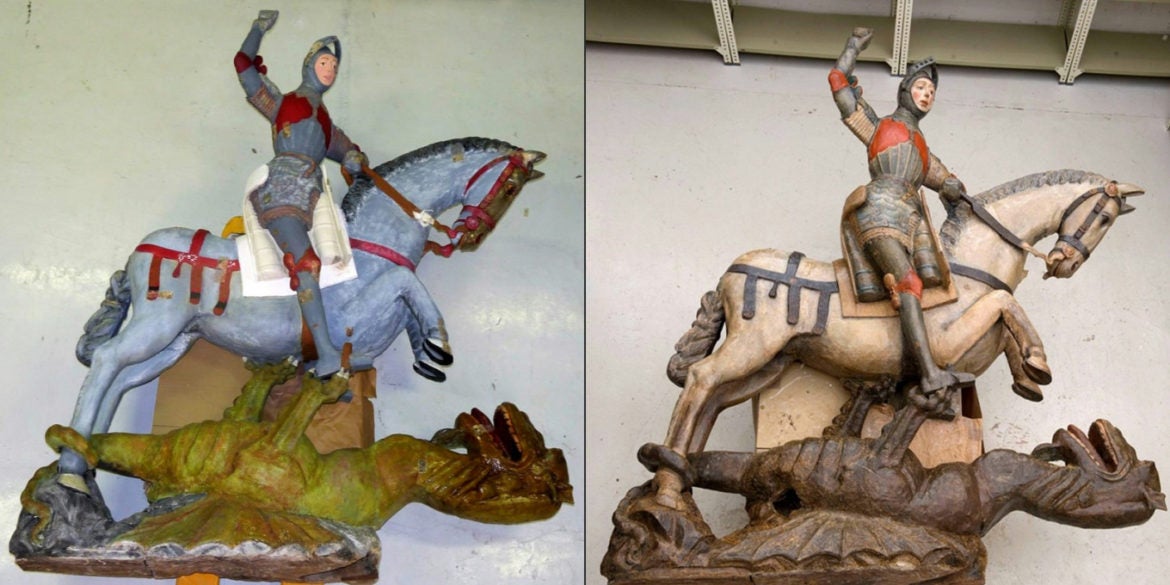 A 16th century sculpture of Saint George in Spain whose amateur restoration left it looking like what many said was a cartoon character has been brought back to its original state, regional authorities said Monday.

The botched restoration sparked anger when it came to light last year, drawing comparisons with a similar infamous renovation in 2012 by an elderly parishioner of a fresco of Jesus Christ which resembled a pale-faced ape with cartoon-style eyes.

The wooden statue of St George charging a horse in the San Miguel church in Estella, a town in Spain’s northern Navarra region, had turned a dark brown with age.

But its restoration by a local crafts business left the soldier with a pink face and a surprised look.

Some Twitter users likened the restored statue to Tintin or Woody from “Toy Story”.

Now, after three months of work in an official laboratory in the nearby city of Pamplona for a cost of 30,000 euros paid by the parish, St. George is back to normal, the government of Navarra announced.

There is irreversible damage, with some of the sculpture’s colours lost forever, Fernando Carrera, spokesman for Spain’s art conservation-restoration association, told AFP.

He said this was just “the tip of the iceberg of so many cases that don’t appear in the press.”

The renovation of the “Ecce Homo” fresco of Jesus Christ in Borja became so famous it turned the small, northeastern town into an attraction for Spanish and foreign tourists.

It has also inspired a comic opera.

The fresco’s elderly restorer, Cecilia Gimenez, has even had her own art exhibited and signed a licensing agreement for the commercial use of the image of her “Ecce Homo” restoration on mugs, t-shirts and other souvenirs.

Baby Jesus was given a bright green robe and the Virgin Mary a bright pink headscarf, sky blue robe and eyeliner at the chapel in El Ranadoiro, a northern hamlet.

“There is a problem in management of Spain’s historical heritage,” said Carrera, pointing to the law that doesn’t clearly state “who must intervene” when a work of art needs to be restored, on top of general rule-breaking.