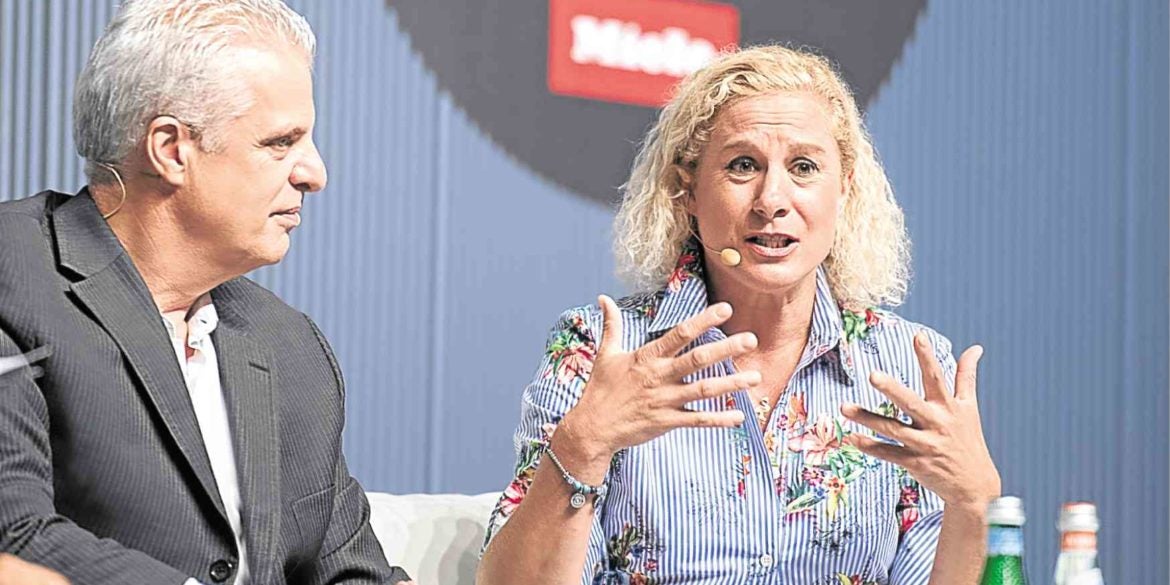 For its 18th edition, the World’s 50 Best Restaurants, sponsored by S. Pellegrino and Acqua Panna, gathered big-name chefs to educate, inform, converse and collaborate over three fun and food-filled days in Singapore.

The awards, which lists down the top 50 restaurants in the world, may be the highlight of the gastronomic event, but it’s the activities surrounding it that are responsible for providing important conversation and excitement.

One of the most anticipated highlights of the World’s 50 Best Restaurants is the #50BestTalks, a 90-minute thought-leadership forum, which had a handful of the world’s best chefs talking about pressing matters, trends and issues in the F&B industry.

Titled “Kitchen Karma” and hosted by Anita Kapoor, this year’s discussion centered on “respect, mindfulness, and happiness” in a toxic environment such as the restaurant kitchen.

Among the topics addressed was the role of chefs as agents of positive change. Ripert admitted not to have always been a coolheaded chef. When he was younger, he emulated his mentors and screamed at workmates and even threw plates on the floor.

“I basically terrorized the team,” Ripert said. As a result, it made everyone miserable, including himself. One day, he just realized how unhealthy this process was and decided something had to be done.

“It’s not that easy because I trained my sous chefs to be as mean as I was, and then had to retrain them to be very kind. It required a lot of patience. It was a work in progress and it took a long time.”

But Ripert has changed for the better and fosters a more conducive kitchen environment now. “Anger is not a quality. It is a weakness,” he said.

Roš who runs Hiša Franko in Kobarid, Slovenia, said that her place may seem and feel like a paradise to work in as compared to busy, fast-paced New York. But the ideal setting doesn’t always work in her favor. For instance, before she flew to Singapore, her pastry chef was complaining and crying over the gloomy, rainy weather.

For the World’s Best Female Chef 2017, change should start with one’s self. “If you don’t treat yourself well, how can you treat others well?”

Soto-Innes added: “If you want someone to act one way, you have to show it. It’s important to know each person in the team, rather than as a group.”

Last Sunday, four chefs—one from Europe, one from Asia, and two from Latin America—gamely took the stage at the Marina Bay Convention Centre to lend their expertise and tell the stories behind some of the standout dishes served in their restaurants.

The day started with Rasmus Kofoed, the only chef to have bagged the gold, silver and bronze medals at Bocuse d’Or, introducing guests to the seafood and vegetable dishes he serves in award-winning Geranium in Copenhagen.

“Cooking is about creating energy together,” Kofoed said, and so he relies heavily on seasonal ingredients to provide a memorable meal to their customers.

Come midday, Virgilio Martinez and Pia León, the husband-and-wife tandem behind Central in Lima, three-time Best Restaurant in Latin America,  took guests on a wonderful journey of Peru’s topography and ecosystems by talking about, and cooking, the Andean region’s distinct produce that spans the plains, sea and mountains.

Finally, funny man Gaggan Anand of Gaggan in Bangkok, Thailand, started his talk by playing loud music and having servers give each guest a plate of his most photographed and talked about cheeky salad, the Lick it Up.

He then asked everyone to lick their plates clean and enjoy a mix of spicy, sweet and sour flavors. Anand proceeded by proclaiming that milk is a religion in India and questioned what fine dining means in 2019. It’s one that recognizes no definitions, he implied.

Apart from Singapore’s wide range of restaurant and hawker offerings, the city had a ton of one-off collaborative dinners that had chef friends produce special menus.

Louis Han of Michelin-star Kimme partnered with Heewon Lim of Buto Restaurant in Seoul, Korea, to come up with a six-course Jan-Chi feast for two nights.

Together, they presented traditional dishes plated in a more refined manner, something regular patrons of Kimme found refreshing as the restaurant typically offers a modern Asian bistro fare.

Crispy seaweed crackers were paired with a trio of side dishes—shrimp tartare, herring roe and spinach topped with raw egg; tofu was made table-side and served with a salad of clam, squid and vegetables; japchae came with galbi gui in the form of grilled beef ribs; and for dessert, hotteok or Korean sweet pancakes with walnut ice cream and puffed rice.

“It was a super good experience,” says Han. “I usually cook fusion dishes, but this time, we cooked more authentic food. And I learned many things. It felt like cooking for the family. That’s what I wanted my guests to feel—like visiting a friend’s house and having a home-cooked Korean meal.”

Zaiyu Hasegawa of Michelin-star Den in Tokyo also had a two-night collaboration dinner with Shigeru Koizumi of Japanese fine-dining restaurant Esora. The duo produced a stellar meal of 10 courses, with each dish as memorable and inspired as the next.

Hasegawa brought his signature dishes from Japan and gave them flavors he borrowed from Singapore. His DENtucky fried chicken wing, presented in a fast-food takeout box, was stuffed with chili crab and mochi rice. His monaka, a crisp wafer sandwich, was his starter and was filled with white-miso-marinated foie gras and instead of the usual daikon and plum jam, it came with lychee and narazuke pickles.

For his part, Koizumi cooked an equally satisfying repertoire consisting of a potent hamo fish soup with wintermelon and sudachi citrus fruit slices; perfectly grilled kinmedai fish with sweetness from fresh peas; and pigeon from Brittany, France, that sliced like butter, served with grilled fushimi pepper. The meal was seamless, not one dish outshining the other.

Equally notable was the cheerful and warm service the whole team provided. They roamed around the room and made sure every customer was well taken care of. It’s something the Esora chef would take home from the whole experience.

“I was inspired by [Hasegawa’s] super hospitable spirit and how he makes his guests happy,” says Koizumi. “I understand why many people want to come back to his restaurant.”

Special thanks to the Singapore Tourism Board and World’s 50 Best Restaurant Awards.