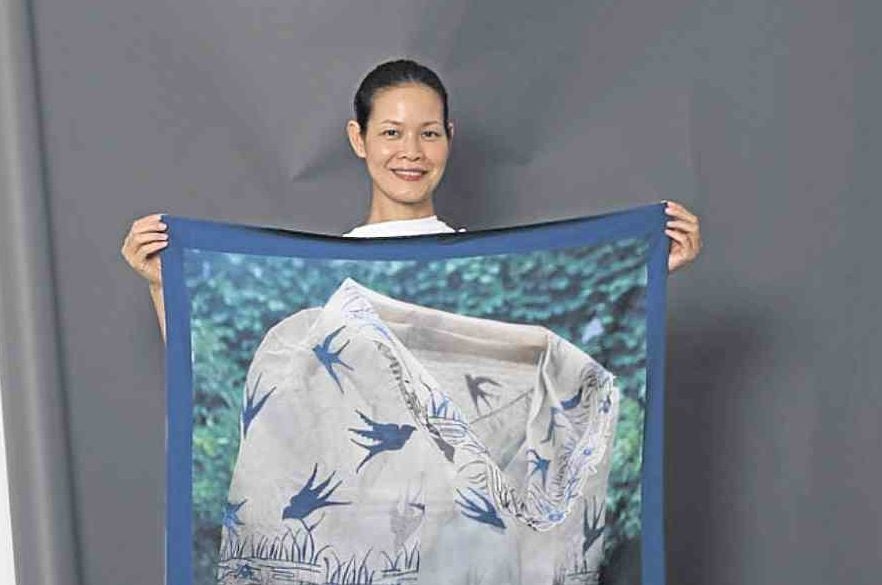 Model and photographer Jo Ann Bitagcol can now add entrepreneur to her CV, with the launch of her photo-print satin silk scarves last week at MNL Design Collective.

The seven images on the small, large and extra-large scarves were outtakes from a book project (“Fashionable Filipinas and Evolution of the Philippine National Dress in Photographs 1860-1960”) she did with scenographer Gino Gonzales, stylist Michael Salientes and Mark Higgins of Slim’s Fashion and Arts School.

Her photos of gossamer-like camisas, printed terno tops, antique hairbrushes and ghostly cameos are striking in their simplicity. As photo prints on these washable fabric squares, they can be worn as halter tops, neck scarves, belts and even cuffs.

“The original run was three pieces per print and per size but since a lot of people responded to it, I reordered, but not more than 20 per image,” Bitagcol told Inquirer Lifestyle in an e-mail interview.

The idea to come up with printed scarves came about during a particularly dry spell. “This was during the slow months, I wasn’t doing anything and I was bored. When I attended my friends’ pop-ups, I felt a bit jealous,” she recalled.

Throwing her hat into the ring

Her friend, fashion designer Joey Samson, encouraged her to throw her hat into the ring and to begin selling her prints.

“I didn’t want to just put out photos printed on paper, so I thought of adding a fashion element to the project. It could be something that people could use as well.”

Bitagcol looked around for a supplier, then remembered how a schoolmate at Slim’s, Vanessa Pinlac, used printed fabrics in her school project.

“I went to the printers, did a few tests with T-shirts and totes, and saw how printed satin came out the best.”

That was when she decided to do the scarves that have been selling well since the pop-up opened.

“I’m lucky because the Filipiniana prints are perfect with the ‘love local’ mind-set now. I was thrilled because earlier a Japanese woman bought one.”

This early, Bitagcol is planning a second collection and says this could be translated into other projects.